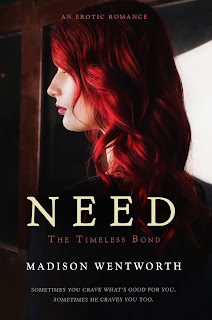 Need
Madison Wentworth
Genre: Paranormal Erotic Romance
Publisher: Madison Crest
Date of Publication: Aug. 30, 2021
ISBN: 979-8468157046
ASIN: B09F3WVDZC
Number of pages: 165
Word Count: 24,000
Cover Artist: Bookcoverzone.com
Tagline: Sometimes you crave what’s good for you. Sometimes he craves you too.
Book Description:
Cherie just met the love of her life, but there’s a catch: He’s dead.
It’s not every day you find true love on an adult website, but that’s the most normal thing about Cherie’s new boyfriend, Evan.
To start with, he isn’t actually new. They’re engaged, or so he says. But she has no memory of planning their wedding, or even meeting him, for that matter, because for her, it hasn’t happened yet.
The bond is there, though. She can feel it. As a vampire of the soul, she can taste it, and she needs to taste more of it. It’s a bond so strong that it awakened his spirit in order to find her. Now, she must save him in order to free him from death... so she can have all of him. She needs that.
Need isn’t a word she uses lightly. She’s never truly needed anyone before. But she’s discovering she needs him now, even as their time together appears fated to be cut tragically short. And he needs her, too, more than she knows.
Yet their mutual craving is only just awakening. Can they find a way to cheat the fates and find a future together?
Time alone will tell.
Amazon

How are you supposed to feel when you find out the man you’ve fallen in love with, who you’ve never even met in person, reveals that the two of you were once engaged, and that you were—inadvertently or not—the cause of his death?

I try to plan for every contingency, but even super-prepared Cher hadn’t seen that one coming.

“Does that mean the whole thing has to happen all over again the same way?” I asked.

“Does it mean we’ll get to meet, after all? Or do I meet another version of you instead?”

This was exasperating. The odd thing was, I found it almost impossible to be mad at him. It wasn’t his fault, anyway. He had no idea how to get out of the place where he was, wherever or whenever that might be, or what would happen if he did. I had no idea how to get him out, either, but I did know I had to find a way—and without him getting run over by a car again. I’d strap him to the bed if I had to.

“If we were engaged before, does that mean we still are?” I asked.

“I think so, unless you want to break it off. Do you?”

I still didn’t feel comfortable telling anyone else about Evan, or telling Layla anything more about him, because now it was even weirder than before. So, the only person I was left with as counselor was my inner voice.

I need to get him back here again. I need to see him.

Need. It was a word I’d hardly ever used before, and certainly not in connection with myself. But I seemed to be using it more and more with Even.

How do you think you’re going to do that if he’s dead?

It was a good question.

I could call my ghost-hunter friends.

You don’t need to hunt him. You already know where he is: In that smartphone screen of yours! You drew him to you through the internet. Now you just need to bring him the rest of the way.

By being yourself. He hungers for you and can’t resist you. He will come.

Could it possibly be as simple as that? It couldn’t be. I remembered the voice had asked me once before who I was, and I’d answered that I was just me. But I was only that person when I was alone. Otherwise, I was always pretending—except when I was with Evan. I could be myself with him, too. So maybe it really was as simple as that, after all. It had to be, because I couldn’t think of anything else. But how could I be my true self, my vampire self, when the world was watching?

You can’t. You need to go someplace.

It didn’t help that I was having this conversation with myself at work.

“Cher, can you come over here for a sec?” Joy motioned toward me. “This customer needs his frames adjusted.”

Fortunately for the eye clinic, and for my own job security, I was great at multitasking. I was able to keep brainstorming about how to get some privacy even while I was adjusting Mr. Thompson’s new glasses to fit him perfectly without pinching the bridge of his nose or pulling down too much behind the ear.

I laughed easily. “I should be. I’ve been doing this long enough. But you’re very good at being a patient patient, and that makes all the difference.”

He nodded slightly and... was he blushing? So often, I found that the smallest kind word or gesture was appreciated beyond what I’d expected. People didn’t treat each other with kindness enough anymore. It had become rare enough that, when it happened, it was unexpected.

And they were grateful. It was sad that common courtesy had fallen so far out of style.

But being nice to people was how I’d been raised; it was part of who I was.

Vampires are known for their courtesy. They only enter where they’re invited.

I had to be myself—my vampire self—to draw Evan back to the land of the living, but I had to invite him, too. That was the one thing I’d been missing. He might be dead, but he was also a vampire, and if I invited him, he would have no choice but to accept.

About the Author:
Madison Wentworth grew up on syndicated reruns of Dark Shadows and The Twilight Zone, coming of age not far from the Malibu surf. A job as a reporter for a small-town newspaper meant digging through police reports, gossip, rumor, and innuendo. And that led to more work as a writer, and a move east and northward to the opposite coast, a venue far more conducive to night-owl vampires and their felines.
An interest in cinema — and outings to see movies such as Ghost and The Sixth Sense — reignited a fascination with the paranormal, and stirred an interest in blending the mystical with the sensual.
The result is NEED, the author’s debut novella.
Amazon Page: https://www.amazon.com/Madison-Wentworth/e/B09F5RH3LT/ 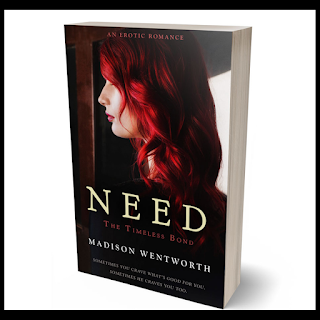