Rhys has a simple life in the backwoods. All he needs is his trusty compound bow, impressive book collection, warm cabin, full food cellar, and himself. So, when Rhys discovers a sly wolf stealing his kills, which are supposed to last him through the coming winter, he’s forced to set a trap and kill the pest.

But, instead of the wolf, Rhys finds a mysterious (and naked) man named Everett.

After learning Everett has nowhere else to go, Rhys hesitantly invites him to stay and heal. But he doesn’t get much time to adjust to life with his eccentric (and stupidly handsome) house guest, not when winter arrives early and with a vengeance.

Cooped up in the cabin together for months, will Rhys learn to love himself and another? Or will hidden truths and empty stomachs snuff out the flames of love and life?

Rhys pulled the string of his compound bow back taut, his hands steady as he readied his arrow. Tucked as he was behind the thick foliage, the buck’s tawny coat was well camouflaged in the autumn hues, making aiming for his target difficult. Though, it also benefited Rhys; combined with being downwind of the magnificent creature, the foliage kept him just as hidden.

The buck, completely unaware of his presence, stepped out enough to bend its graceful neck to drink from the trickling stream. Still on guard, cautious as animals of prey always were, its ears flickered at the tiniest of noises, its muscles tensed and ready for flight at any moment.

Rhys had only one chance at getting this right.

One wrong move, and the buck—a good month’s worth of venison dinners—would disappear into the forest, never to be seen again.

This wasn’t Rhys’s first rodeo, not in the slightest, yet he couldn’t help the nervous hitch in his quiet, slow breathing when it seemed, for a moment, that the buck had seen him. Its head jerked up and turned, dark eyes looking straight in his direction. It didn’t flee, only stared ominously as if caught in a truck’s headlights. Rhys knew he wouldn’t get a better chance than this one.

It was always a strange feeling to look into the eyes of his prey, of something he was going to kill. Ignoring the shudder that rolled down his spine, he took the shot anyway. Releasing his grip on the string, he allowed his arrow to take flight in a silent, quick whirr through the air.

Before the buck could even blink in reaction, the sharp metal arrowhead lodged deep where the shoulder of its front leg met its torso, cutting through thick layers of fur, skin, fat, and muscle—and hopefully its heart or lung, maybe even shattering its shoulder. Rhys had counted on his aim making the cleanest, quickest kill, one that would keep the animal’s suffering at a minimum.

The buck immediately took off running down the stream with a loud startled noise, and so did Rhys, chasing after his wounded prey. Still much faster than he was, even with its injury, the buck disappeared into the trees. Leaving a trail of blood and crushed foliage in its hasty retreat, it led the hunter on through the forest for what seemed like at least a good few miles.

But, when Rhys finally made it to the end of the blood trail, there was no buck in sight, only pools of blood mixed in with the muddy ground, and hoofprints leading off deeper into the forest, away from the stream. Rhys furrowed his eyebrows as he knelt beside them and traced their outline with his fingers.

Not hoofprints, he realized with an angry huff—wolf prints, and familiar ones at that, the large canine’s paws unmistakable to his trained eyes. Streaks of blood followed alongside them, which left Rhys with only one answer.

“It’s you again, huh?” he grumbled through gritted teeth, digging his fingers into the wet mud, replacing the print with his own.

This wasn’t the first time the wolf had stolen his kill. In fact, it was the fifth time this season. Rhys thought that by traveling far in the opposite direction he normally took toward his trusty hunting perch, he’d be able to avoid the bane of his existence, but yet again, he had been outsmarted.

It was as if the thieving canine had been following him, stalking him even, to drag away his kills, mooching off of his hard work and dedication. The reoccurring situation pissed him off to no end, especially when winter was only a mere month or two away from turning the landscape white and cold.

He needed this kill, needed the other four lost kills as well, to keep himself from starving in the dead of winter when it would be next to impossible to do any sort of hunting. This late in the game, his food storage cellar should be full already; he shouldn’t have spent all of his time hunting when firewood and water needed to be collected and stored, and his fall vegetable harvest needed to be pickled.

With how things were looking now, it was loud and clear: Rhys was utterly and completely fucked. 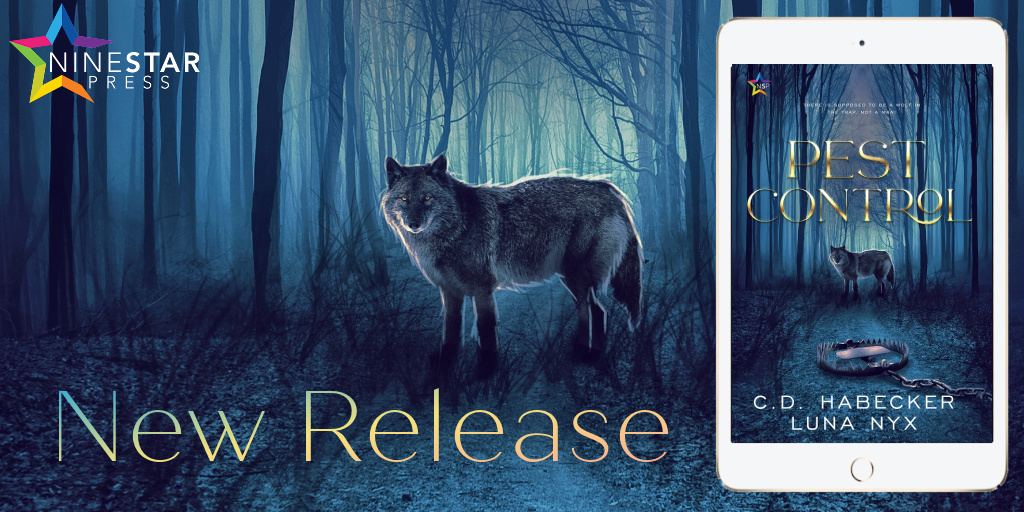 C.D. Habecker is a bisexual woman residing in Portland, where she is pursuing a BFA in fiction writing at Portland State University. Ever since she was a child, C.D. has been an avid writer and reader. Writing fanfiction helped her realize her passion for creating queer romances and spinning familiar tropes. Her favorite trope is any type of animal shifter or hybrid, with magic coming in a close second. C.D. strives to give good representation to the queer as well as disabled communities, often featuring characters who share her mental and physical illnesses. She believes that not every queer story needs to focus on the struggles and hardships of being queer, as there is more to a queer person’s life than that. Everyone deserves a sweet yet deeply nuanced romance they can relate to, as well as swoon, cry, and laugh with.

C.D. spends her days writing, reading, playing with her dogs, listening to BTS, and thrifting for her vintage clothing business. Visit C.D. on Twitter.

Luna Nyx is an asexual lesbian young adult living in the Denver area of Colorado. She’s currently studying to become a Vet Tech, and writes on the side as means to pursue her creative passion. She fell out of love with writing and reading as an adolescent because growing up with ADHD made school a big challenge for her, and she’d begun to associate her passions with failure and disappointment. However, after meeting C.D. Habecker, Luna rediscovered her passion for literature. Inspired by her struggles growing up and the lack of decent LGBTQIA+ representation in media, Luna writes stories to show people with neurodivergence and “queer” identities that they aren’t alone.

Luna currently lives at home with her parents and spends her days studying in college, lovingly annoying her three pet cats, and burying herself in her musical and artistic passions. Visit Luna on Twitter.