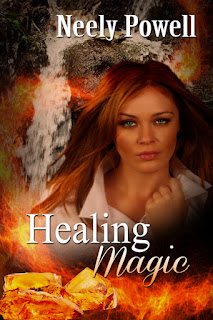 Healing Magic
The Witches of New Mourne
Book Three
Neely Powell
Genre: Paranormal Romance
Publisher: The Wild Rose Press
Date of Publication: Oct. 18, 2021
ISBN Paperback: 978-1-5092-3960-3
ISBN Digital: 978-1-5092-3961-0
ASIN: B09F3VX1PCB
Number of pages: 279
Word Count: 65,001
Cover Artist: Debbie Taylor
Tagline: An empathic witch. A magical warrior. Joined by love, they battle a demon and an evil spirit.
Book Description:
Eva Grace Connelly is a witch and a beloved healer. Rodric McGuire, paranormal expert and descendent of faerie warriors, adores the flame-haired beauty. But their future is on hold as a family curse threatens her life.
Centuries ago, the Witches of New Mourne struck a dark bargain with the Woman in White. In exchange for peace, the malevolent spirit takes a Connelly witch from each generation.
Eva Grace is convinced she can heal the ghost's troubled spirit and end the reign of terror. But violence and family heartbreak challenge that resolve. As Samhain approaches, the Woman and her vile demon have control.
Is sacrifice the only road to peace? Can Eva Grace and Rodric uncover the secrets and lies at the heart of the curse?
Amazon     BN

Rodric watched as Eva Grace fell into the raging river. A wicked and powerful energy kept him in place. Below, she was caught in the swirling waters of a huge vortex.

A deep rumble moved through the air. Laughter, Rodric realized. The demon was laughing.

“Damn you!” Rodric yelled. “You’re a coward controlled by your mistress.”

As thunder boomed, the water shot up and Eva Grace was level with Rodric. Treasures the faeries had given her gleamed at her throat, and the demon made the earth shake.

“Give those to me,” the creature roared.

The demon couldn’t just take them, she’d have to give them to him. Which meant Rodric could save her. But how?

A thick rope appeared in his hands. He made a loop and threw it with all his strength toward her. She fought to get the loop over her head, but the effort cost her.

The demon roared at Rodric. “Tell her to save herself. Give me what I need.”

“She’s not giving you anything,” Rodric shouted.

“Maybe to save you.” A lightning bolt struck just feet from Rodric.

Summoning all the magic in his blood, Rodric slowly began to pull Eva Grace up from the river. 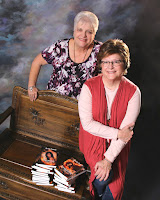 About the Author:
Leigh Neely and Jan Hamilton Powell are the writing team of Neely Powell. They met working at a rock ‘n roll radio station, discovered they’d both rather be writing fiction, and have been close friends ever since. Their path to cowriting paranormal romance took some detours.
Leigh’s resume chronicles a diverse career as a disk jockey, newspaper reporter, advertising copywriter, magazine writer and editor. Jan wrote 24 romance novels as Celeste Hamilton for Silhouette and Avon Books and then built a career in corporate communications and public relations.
Neely Powell became a successful team when they turned their attention to shifters, werewolves, witches, ghosts, fae and all things supernatural.
Their first novel was TRUE NATURE from The Wild Rose Press, followed by AWAKENING MAGIC and HAUNTING MAGIC. The Witches of New Mourne trilogy will conclude in October 2021 with HEALING MAGIC.
Their rules for maintaining a partnership are simple:  be honest, be kind, and bring Diet Coke and chocolate.
http://www.neelypowellauthor.com
https://www.goodreads.com/goodreadscomneelypowell
https://www.facebook.com/NeelyPowellAuthor
https://www.instagram.com/neely.powell/
https://twitter.com/NeelyPowell3
https://www.tiktok.com/@neelypowell 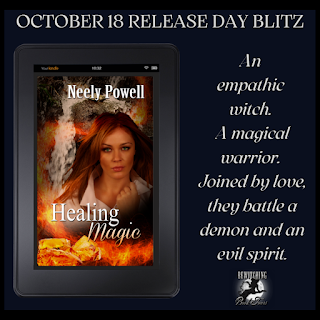