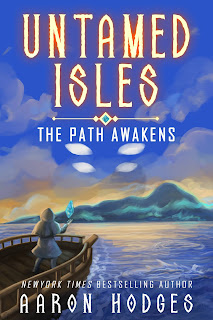 Untamed Isles: The Path Awakens
Untamed Isles
Book One
Aaron Hodges
Genre: Epic Fantasy
Publisher: Aaron Hodges
Date of Publication: 26th October
ISBN: 978-1-99-101803-8
Number of pages: 400
Word Count: 105,000
Cover Artist: Nikko Marie
Book Description:
On a still and peaceful night, the world shook, and light split the sky asunder.
The seas parted, an island rose.
And beneath the earth, an ancient power stirred.
Zachary Sicario thought he’d finally turned his back on the underworld. For ten years he was content with his cottage in the highlands of Riogachd. But a master thief never truly retires. When Zach is struck down by a wasting illness, he is left with two options: accept his fate, or return to his criminal past in search of a cure.
It isn’t a difficult decision.
With rumours of a mysterious island circulating the kingdom, Zach goes in search of old contacts. They speak of strange lights and disappearing ships, of treasure and riches promised for the first to reach its distant shores. Zach has little interest in trinkets—but there’s another tale, one that whispers of the power to change a man’s fate.
With a secret expedition departing in the coming days, Zach decides to roll the dice. But he’s not the only one interested in magic. His competition are warriors and thieves, noblemen and assassins, all in their prime. And Zach is far from the man he once was.
Can the master thief beat the odds one last time?

Crouched atop the walls of the palace grounds, Zachary Sicario watched as the lanterns below flickered into life. His keen eyes tracked the path of the young servant as she scurried through the manicured gardens, passing from one lamp to the next with hardly a pause for breath. Bit by bit, the night was pressed back by the shimmering lights, until the palace formed a bubble of luminescence against the oppressive gloom of Leith under nightfall.

“Palace” might be overstating things a little, Zachary thought to himself as the servant retired, her task complete for the evening.

In typical aristocratic fashion, the noble owners had done their best to replica the grandeur of the royal palace back in Londinium. But Zach had visited those grounds himself on a number of occasions, albeit in a less than official capacity. He knew a cheap knockoff when he saw one.

The fountains might fill these gardens with the same joyful whispers as in Londinium, but he could see where the paint had begun to flake from the “marble” statues that adorned their waters. Neither did he see the same careless displays of wealth typical of the capital. No golden inlays around the windows and doors, no bejeweled eyes on the sculptures for passing thieves to filch. Even the gardens lacked the same carefully manicured touch as those found at the royal palace.

But then, that wasn’t so surprising. Zach had tried his hand at gardening since retiring; he knew well the difficulty of finding good help this far north. The dark spots infecting several of the rosebushes should have been trimmed days ago.

Breathing in the sweet scent of the flowers, Zach stifled a sigh. He’d enjoyed the quiet of his garden, the homely feel of the cottage in the highlands, far from Leith and its dark underbelly. He had thought this world far behind him. But alas, fate had other plans.

“Mansion” is probably more appropriate, Zach thought at last, returning to the task at hand.

In addition to the palpable absence of real wealth, the grounds of the mansion lacked one other key feature. Security. Zach had spent the past few days staking out the noble’s property. There were just two guards patrolling the outer gardens—and on this cold winter night, both had already retreated to the burning hearth in the guard house. Tonight would be like stealing gold from, well, a noble.

Still, years had passed since Zach’s last job, and he lingered a while longer in the shadows, watching for something he might have missed. Even with these rich aristocratic sorts, one had to take care.

Especially with these sorts, he reminded himself. Not even Zach’s reputation would survive being caught by the likes of Roy Whitfield.

Truth be told, he’d been surprised to find the man’s name on his list, given so many of the others were less than exemplary citizens. But then, the aristocracy always had considered themselves above the rules. It made sense that at least one of their kind would be interested in the Anomaly.

Three months had passed since the storm had wreaked havoc throughout the island kingdom of Riogachd. Most of the fishing fleet had been lost, either destroyed at sea or sunk in harbours across the nation, inundated by the waves that had swept the coast. Not even those citizens further inland had been safe, as storm surges broke through seawalls and rivers flooded lowland villages.

The storm of the century, people had called it. Yet even as the battered communities of Riogachd struggled to rebuild, the King’s Royal Navy had been deployed not to the clean-up, but to a blockade deep in the Northern Sea. It hadn’t been long before the rumours began to circulate.

Whispers had spread about strange lights and disappearing ships, though of course the King’s Council refused to even acknowledge the Anomaly.

Which, of course, meant half the populace was convinced the Council were covering up a secret treasure to be had out in the Northern Sea. No one could quite decide on the nature of that treasure—some claimed it must be a sucken galley carrying gold from the bank of Londinium, others that the princess’s ship had gone missing on the raging seas.

As the days turned to weeks, the rumours had grown in size, and now people spoke of portals to another world, of islands of gold risen from the depths, of magic and sorcery, of the power to fulfil a man’s greatest desires.

Eventually, some had tried to slip past the naval blockade. Amateurs for the most part, those with access to a skiff or steamer that had survived the storm. Some had been caught and after a public trial, hanged. The rest had never been seen again.

Now three months had passed, and the amateurs had long since given up trying to uncover the secrets of the Anomaly.

It was time for the professionals to give it a try.

On the wall of the mansion, Zach drew in a calming breath. A cloud drifted across the half-moon, darkening the sky but doing little to dim the lanternlight in the grounds below. But it finally stirred Zachary into action. He made one last check of the knives hidden on his person. Maybe they weren’t as effective as one of the modern revolvers carried by the upper echelons of society, but they were useful in a pinch. And quiet.

Finally satisfied he was ready, Zach stepped from the wall and dropped to the ground with a soft thump. He crossed the lawns quickly, slipping from shadow to shadow, keeping as far from the lanterns as he could. Only once did he stop, when a sudden sound came from overhead. A flash of white feathers was all he glimpsed of the owl as it dove; a moment later it rose on languid wings, the dark body of a rat clutched in its talons.

Frozen in the shadow of a plum tree, Zachary held his breath, waiting to see whether the creature had drawn the attention of the guards. Seconds slipped by and he found his mind drifting back to those first whispers of the Anomaly. He’d always had a nose for a good mystery, and he’d needed the distraction, something to divert his mind from his…other problems.

Even in retirement, Zachary was more resourceful than most of those clinging to the underbelly of Leith. It hadn’t been hard to find a soldier from the royal navy. Most of those in the blockade around the Anomaly spent their off-duty days in Leith. It had been even easier to convince the man to join him at the local tavern. Several rounds of mead later, he’d had the truth straight from the horse’s mouth.

It wasn’t just strange lights and fog that had appeared out in the Northern Sea. An island had apparently risen from the depths, though not of gold. Even so, its appearance had caused much consternation amongst those back in Londinium, for it spoke of great power, one outside the Council’s control.

But when the armada had tried to investigate further, a great mist had risen around the island, and those ships that had drifted too close had been swallowed up, vanishing without a trace.

The soldier had seen the lights himself, great flashes of white and green and blue in the darkness, but his ship had thankfully escaped unscathed by whatever phenomenon surrounded the place.

The entire island was a mystery wrapped in impossibility.

Just the sort of false hope a dying man could cling to with his last days.

About the Author:
Aaron Hodges was born in 1989 in the small town of Whakatane, New Zealand. He studied for five years at the University of Auckland, completing a Bachelors of Science in Biology and Geography, and a Masters of Environmental Engineering. After working as an environmental consultant for two years, he grew tired of office work and decided to quit his job in 2014 and see the world. One year later, he published his first novel - Stormwielder - while in Guatemala. Since then, he has honed his skills while travelling through parts of SE Asia, India, North and South America, Turkey and Europe, and now has over a dozen works to his name. Today, his adventures continue...
https://aaronhodgesauthor.com/
https://aaronhodgesauthor.com/newsletter
https://www.facebook.com/aaronhodgesauthor
https://www.instagram.com/aaronhodgesauthor/ 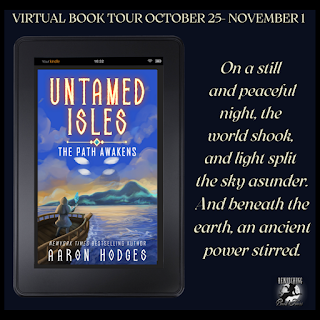