Ye Gods! The Law Is An Ass! Tour and Giveaway

Ye Gods! The Law Is An Ass!

It was the Great Lie, and it could destroy the Vampire Nation.

In First, We Kill All the Lawyers, vampire lawyer Donovan Trait survived repeated attacks by a serial killer. Now, after violating a marital agreement with the Vampire Coalition and several ancient Vampire Laws, Donovan and his newly-turned vampire bride are on the run.

In exchange for permitting a pure-blood vampire to marry a turned human, the Traits had agreed to allow vampire scientists to monitor the conception and birth of their children. But when Judge Shirley Magnusen Trait turns up accidentally pregnant on her wedding day, the fury of the Coalition is unleashed.

The tribunal recommends unacceptable punitive action and the Traits are forced to flee to a mysterious island of vampire nuns. The Traits are, by profession, seekers of the truth. But this time the truth may not set them free. In fact, it could start a revolution. Will the Traits escape the clutches of the Coalition and keep their babies safe? Or will their family be... eliminated? 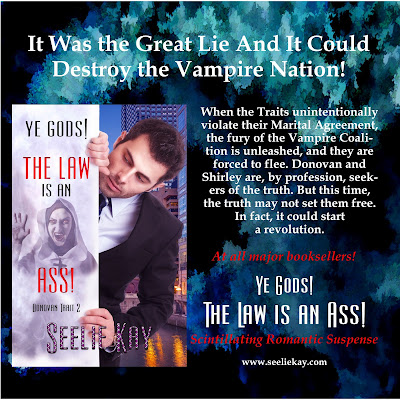 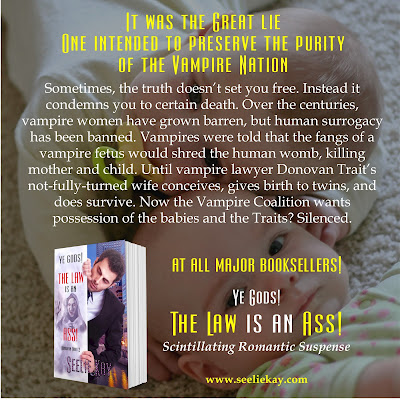 Jonathan opened the envelope and reviewed the report. When he got to the last page, his eyes grew wide. “Donovan, it seems Shirley had a reason for that lightheadedness.”

Donovan gasped. “What is it?”

His father handed him the document and pointed at the bottom of the page. “She’s pregnant.”

Donovan grabbed at the wall. Overwhelmed with unfamiliar emotion, he settled onto a chair and rested his head in his hands. “Ye Gods,” he muttered. “I’m going to be a father.”

“And I am to be a grandfather, finally. However, I am afraid the Coalition may have a problem with this. They may not permit your marriage today or anytime soon.”

Donovan Trait turned to his father, his eyes filled with fury. “Why does it matter? We’re already married in the human world and we are about to repeat our vows before all in the Vampire Kingdom. This doesn’t change anything. It’s not like we are going to have a child out of wedlock. We have broken no laws.”

Jonathan Trait arched a fluffy white brow. “We need to discuss this, son.” He sat beside him. “The problem is, you explicitly agreed to allow the Coalition to oversee the conception and birth of any children born of this joining. Every step of the process was to be observed, studied, and documented. You know this.”

“So, they are going to force us to terminate the pregnancy and start over?” Donovan groaned. “It’s too late. I will not force her to start over. They can be voyeurs the next time. I am sure Shirley will have no problem with the monitoring of her pregnancy. It’s not like she can consult with a human physician. They would not understand that her child may have fangs in utero. And the blood work…” He shuddered. “I can’t imagine what…”

Jonathan frowned. “The agreement says from the point of conception, son.  You know what sticklers they are. Our women became barren more than a century ago. We need to understand why. From a scientific perspective, we need to know exactly what was different, so we can find a solution.”

Jonathan chuckled. “Some of those old fuddie-duddies would stroke out if forced to watch a virile man like you seduce his wife.” His expression turned somber. “Let’s look at the facts as we know them. As a lawyer, that’s a process with which you are familiar.

“Human women can’t carry a vampire child to term. We know that. They miscarry. The human uterus is simply not strong enough to withstand the damage caused by a developing vampire fetus. Those fangs shred the amniotic sac. However, we also don’t know if a female vampire can carry a human baby to term. Shirley may not be able to provide the fetus with the nutrition that it needs to develop properly.

“That raises several questions, Donovan. Is Shirley’s life in danger? And is your child’s life in danger? Not just physically and genetically, but socially. The baby is an anomaly. To some, an adnomination. A freak. He or she will constantly be in danger. If you had kept to the agreement, she and the baby would have been protected. Now everything is at risk.” 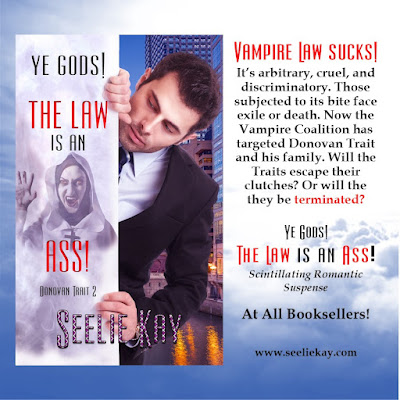 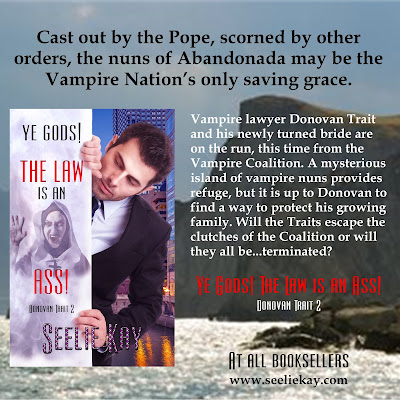 First, We Kill All the Lawyers

Someone is killing lawyers, but a particular vampire lawyer won’t stay dead.

Donovan Trait is a marked man. Flamboyant, stunningly handsome, and notoriously insatiable, his attitude and style belie his skills in the courtroom. No one survives a cross-examination at Donovan’s hands. His knowledge of the law and trial practice has accumulated over the years… and years, of experience. More than three hundred years. You see, when Donovan isn’t seducing judges and juries, he’s a creature of the night. And now that someone has decided that it’s time to kill all lawyers, his lust for attention has set him in the murderer’s sights. The problem is, vampires don’t die. Not easily, anyway. That’s good news for Donovan, not so much for his very human lady love, also a target of the serial killer. Will several unsuccessful attempts on his life expose Donovan’s true nature? Will the killer learn the secret that will guarantee a permanent death? Or will Donovan finally manage to put an end to the killer’s murderous spree and live happily ever after, with his lady love?

Donovan’s cell phone pinged. He pulled himself into a small alleyway, away from the stampede trudging back to their workplaces after lunch, and leaned back against a building to read a text. His face screwed up in confusion. The text read, The first thing we do, let’s kill all lawyers! Starting with you!

“What the bloody hell?” he muttered. “Is this some kind of joke?” Donovan’s eyes surveyed his surroundings. He gazed right, then left. It did not appear that someone had made him the focus of their attention. Everyone was scurrying about, like mice in pursuit of a big cheese. “Must be Finley,” he said. “Finley is always plying me with lawyer jokes. He thinks he’s funny.”

Donovan shrugged. Not funny at all. He left the alleyway and re-entered the mass migration on the sidewalk. He approached the crosswalk at Michigan and Superior and emitted a snort of frustration as the light changed and the crosswalk filled with cars. He was bumped hard by someone behind him. Donovan was forced to step into the street to regain his balance. A cab rushed by and narrowly missed clipping his side. Donovan jumped back onto the sidewalk.

A woman screamed and Donovan jerked his head around, trying to see what all the fuss was about. The woman was pointing at him. Donovan frowned and turned away. God save me from simpering females who saw the last issue of City Magazine. Donovan had appeared on the cover after being named as one of Chicago’s most eligible bachelors. Since then, he had learned that the female population was comprised of women of questionable morals and distressing behavior. He was growing weary of the attention. While his colleagues thought it a wise marketing strategy, it had brought him nothing but unwanted female attention. He had become prey.

Vampires were predators. They stalked their victims. Sometimes, they pursued them with a vengeance. That was why he had joined the legal profession. His predilections were well-suited to that particular world. Now, his role had apparently shifted and he was not pleased.

Someone tapped Donovan on the shoulder. “Sir? Are you alright? You’re bleeding. It appears someone stuck a knife into your side.”

Donovan’s mouth gaped and he turned toward the man who had spoken. Then he looked at where the man pointed. There was indeed a knife sticking out of his left side and a stream of his blood was flowing onto the sidewalk. He had a very high threshold of pain. He hadn’t felt the knife thrust into his side. If it wasn’t so appalling, he would be embarrassed. Donovan opened his mouth to reply. Then the pain in his side exploded and his vision dulled. Slowly he slid onto the sidewalk as if he planned to sit on the curb.

Then everything went black.

Award-winning author Seelie Kay writes about lawyers in love, sometimes with a dash of kink.

When not spinning romantic tales, Seelie ghostwrites nonfiction for lawyers and other professionals. Currently, she resides in a bucolic exurb outside Milwaukee, WI, where she enjoys opera, the Green Bay Packers, gourmet cooking, organic gardening, and an occasional bottle of red wine.

Seelie is an MS warrior and ruthlessly battles the disease on a daily basis. Her message to those diagnosed with MS: Never give up. You define MS, it does not define you!

ebook of First We Kill All the Lawyers – 2 winners