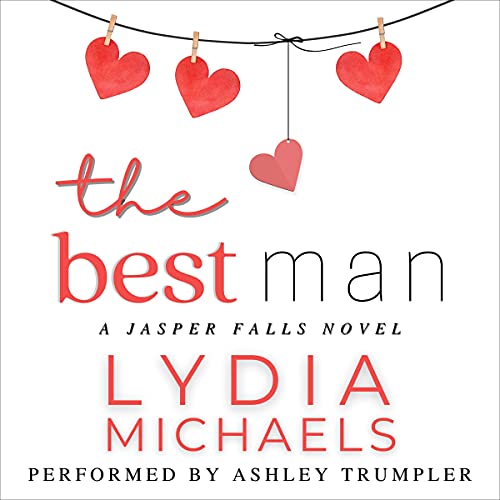 Patrick fell for Julie in kindergarten when she shared her snack with him. As her childhood best friend, he adored and protected her for years, until she gave her heart to someone else. Loving Julie meant letting her choose her own path, so he did the gentlemanly thing and bowed out of her life, but never stopped loving her from afar.

When Patrick returns to Jasper Falls for his brother’s wedding, Julie is there - alone - and he decides it’s time to hang his heart on the line, but Julie has been keeping secrets, too.

Is it ever too late for a first love? When it comes to Julie Cook, there could never be another. And, this time, Patrick Clooney is determined to prove himself as the best man.

Momma Says: 3 stars⭐⭐⭐
We're back in Jasper Falls, this time for a wedding and a bit of the one who got away romance for Patrick Clooney. This second in the series picks up where book one left off and can be read as a standalone. That said, I'd recommend starting at the beginning because there are so many terrific characters in this series, and you'll want to meet them all. Plus, it's just a truly awesome book.
Patrick and Julie's story is a bit lighter than the first book in the series but just a bit. It definitely hits on some emotional topics with Julie's past relationship. And that's where I had problems with this one. Without giving too much away, I'll just say that things happened a little too quickly between Pat and Julie. I get that Pat's been in love with her since they were kids, and they've been friends all the while, but it felt really rushed to me. Nevertheless, as I already mentioned, this series is packed full of great characters, and too fast or not, the storyline held my interest.
Ashley Trumpler was back for the narration, and she does a phenomenal job. She captures the emotion perfectly, so whether the characters are excited, scared, angry, sad... you feel it.
All things considered, The Best Man is an entertaining story with lovable characters - except a couple, but we've got to have someone to hate when things are getting all angsty.