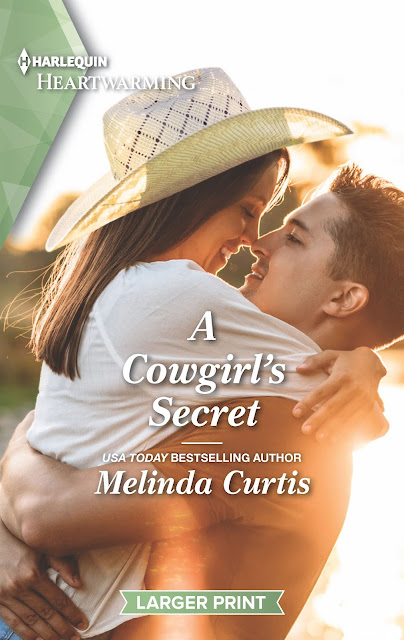 Could saving the ranch…

Mean a future together?

Cowgirl Cassie Diaz has a secret—a bull riding accident may have stolen her dream of motherhood. She needs to recover, but how can she rest with her family’s ranch in peril? Recent Second Chance, Idaho, arrival Bentley Monroe offers help, and his quiet strength makes her feel safe. Loving him could heal her wounds, but would she have a future with this family man?

Add A Cowgirl's Secret to your Goodreads!

Momma Says: 4 stars⭐⭐⭐⭐
Such a sweet cowgirl romance! I loved both of the main characters in this one, and I was all in for their romance right from the start - even before the "romance" actually started. I'll admit that this is my first experience with Melinda Curtis, so obviously, I haven't read the rest of The Mountain Monroes series. Something I intend to change very soon. I will say that if I was missing necessary information, I was enjoying these characters too much to notice. The pacing is fast enough to keep the pages turning but not so much that it would feel rushed. Another thing I enjoyed was the variation in emotion. The story's angst is tempered with lighter moments, so it doesn't get too heavy. Everything in this one just works so well - the town, the characters, the storyline, it's a darling read, and I now have another series to add to my binge-read list.
🞿🞿🞿🞿🞿

“I told you so, Cassie.” Cassie’s brother, Rhett, shook his head.

Cassie dropped her saddle back on the stand, having only lifted it a few inches. She leaned on the horn and cantle, trying to ease the pain that stretched from the top of her hip to her inner thigh. “Don’t start.”

Don’t tell her she shouldn’t have tried bull riding.

Don’t tell her she should have stuck to horse training.

There came a point in every young woman’s life where she had to accept that some dreams were never coming true—hers being making a decent living training horses. At this point, unless she won the lottery, she needed to set aside girlish dreams and get “a real job,” whatever that was.

Cassie wasn’t ready. And honestly, she might never be. Rhett chuckled. “You winning that purse was a long shot, kind of like Grandpa winning the lottery with that ticket he buys every week.”

“And here we go,” Cassie muttered, glancing at Baby, the quarter horse she’d been trying to saddle when a spasm from her bull-beaten hip sidelined her. “Rhett is on a roll.”

“Indeed, I am.” Rhett tipped up his black cowboy hat and grinned. “I’m surprised you can walk after that bull stomped on your hip.”

The emergency room doctor had been surprised, too. Not that she’d beaten all odds. The orthopedic specialist had given some grim news. News Cassie hadn’t shared with her family, because…

“You never should have gotten on that bull, sis.”

She continued to stare at the rafters, settling her cowboy hat more firmly on her head. There were cobwebs up there that needed tending to, if one was bothered by such things, which she was, unlike Rhett, who tended to go through life as happy with a tidy environment as a messy one. He preferred to spend his time on extreme experiences, like zip-lining and bungee-jumping off bridges.

Cassie’s gaze drifted back down to the photo gallery on the wall behind her brother.

During a streak of good luck and flush bank accounts, her father had insulated the Bar D’s barn, which came in handy five or six months out of the year when Second Chance, Idaho, was snowed in. But because the insulation had to be held in with something, he’d installed cheap wood paneling. And because the paneling was so very bare in the breezeway, he’d hung pictures of Rhett and Cassie competing in rodeos when they were kids—Rhett in calf and trick roping, Cassie in barrel racing and trick riding.

Back when I thought that’s what I’d do with the rest of my life: cowgirling.

Like horse training or trick riding offered a health plan and retirement benefits. How naive she’d been.

Those pictures had been taken before Cassie’s parents decided to take a job managing someone else’s ranch in Wyoming and handed back the reins of the Bar D to Grandpa Diaz. Before Cassie began keeping the Bar D’s books and worrying about making ends meet.

Melinda grew up on an isolated sheep ranch, where mountain lions had been seen and yet she roamed unaccompanied. Being a rather optimistic, clueless of danger, sort she took to playing "what if" games that led her to become an author.  She spends days trying to figure out new ways to say "He made her heart pound."  That might sound boring, but the challenge keeps her mentally ahead of her 3 kids and college sweetheart husband.