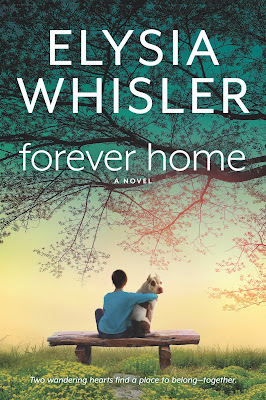 If home is where the heart is, Dogwood County may have just what Delaney Monroe needs.

Newly retired from the Marine Corps, Delaney is looking for somewhere to start over. It's not going to be easy, but when she finds the perfect place to open her dream motorcycle shop, she goes for it. What she doesn't expect is an abandoned pit bull to come with the building. The shy pup is slow to trust, but Delaney is determined to win it over.

Detective Sean Callahan is smitten from the moment he sees Delaney, but her cool demeanor throws him off his game. When her late father's vintage motorcycle is stolen from Delaney's shop, Sean gets to turn up in his element: chasing the bad guy and showing his best self to a woman who's gotten under his skin in a bad way.

Delaney isn't used to lasting relationships, but letting love in - both human and canine - helps her see that she may have found a place she belongs, forever.

Momma Says: 4 stars⭐⭐⭐⭐
Forever Home is the second book in Elysia Whisler's Dogwood County series, and while I haven't had the pleasure of reading the first book, I plan to remedy that soon. That said, I didn't feel like I was missing anything I needed to follow this story. It's just that I thoroughly enjoyed the setting and the characters, and I want more of both. Of course, this one also has a scene-stealer of a dog that I just wanted to hug every time he showed up on the page. The story is a good mix of romance and mystery, and I enjoyed both elements. It's also a story of finding your place as well as your family even if it is a chosen family rather than the one we're born to. It's a story of moving forward and healing, and the author touches on so many important issues. The whole thing is wonderfully written and it's one of those books that worms its way into your heart, one that I won't soon forget.

Delaney should’ve known that this was where she’d end up. This was the kind of street a woman went down when all the big changes in her life were happening at once. You simply couldn’t hit a retirement ceremony, the road and a funeral all in one week and not end up on Three Rebels Street.

“Small is not the right word. I prefer quaint.” The real estate agent, Ronnie, gazed around the studio apartment situated on Three Rebels Street, and nodded her head in approval. “You said it was just for you, right? Which means it’s the perfect size.”

Stop trying to sell me on the apartment. Ronnie had described it as an “alcove studio”—not just a studio—because even though the living room and kitchen were all in one large space, the bedroom was situated in a little nook, with its own door. Delaney didn’t care. The living quarters didn’t really matter. Right now the place was dumpy. Dust everywhere, the ceiling fan hanging crooked with exposed wires, and debris in the corners, like the previous tenants hadn’t taken care of the place and then left in a hurry.

“We didn’t have a chance to get this cleaned before your showing,” Ronnie said, following Delaney’s gaze. “Remember, I suggested waiting until Friday.”

But Delaney hadn’t been able to wait.

Ronnie lowered her voice to a near whisper. “They were evicted. But this place cleans up nice, I promise.”

“Can we go back down to the shop?” Delaney ran her hands through her hair, rubbing the weariness from her scalp. Ronnie had whisked them through the front bay door and up the stairs, like the apartment was the prize inside the cereal box. And Delaney supposed it was—small, an add-on, not really the point. For Delaney, the shop downstairs was the entire point.

“Of course.” Ronnie’s voice was bright, forced, like she didn’t give two shits. This was probably her last showing of the day and she wanted to get home, into a hot bath with a glass of red as soon as possible. She clacked down the stairs in her high heels.

Delaney followed, the earthy clunk of her motorcycle boots the bass drum in the cacophony of their feet.

“The shop.” Ronnie swept out her arm. “Look how much space.” There was no enthusiasm in her voice. Ronnie, who probably did mostly living spaces, had no idea how to sell the garage.

Didn’t matter. Delaney sized up the shop herself: concrete floor, perfect for working on bikes. It was kind of dinged up, but that was okay, she was already envisioning painting it beige with nonslip floor paint. Modern fluorescent lighting. Large bay door, wide-open to the cool air, excellent for ventilation. A countertop with a register. Empty shelves on one side for parts and motor clothes. Showroom space for custom bikes, and enough room for at least two workspaces out front. The rest, Delaney would provide. Hydraulic lifts. Workbench. Parts tank. Tools. Parts. Bikes.

She wanted to pinch herself, but chose a poker face. Ronnie stood in the center of the floor, like she was trying to avoid touching anything, to avoid getting any grease or oil on her smart red suit. The shop was in better condition than the apartment, but it still looked like the last occupants had left quickly—or, if they’d truly been evicted, perhaps reluctantly was a better word. Nothing important remained, but the place hadn’t been swept or washed or readied for sale in any manner.

“I’ll consider this.” Delaney rubbed her chin as she strode through the shop. “It’s a little small.” It was actually larger than she’d expected. “Light’s good, but might get a little cold in the winter.” It was winter now, technically. Mid-March. Delaney loved this time of year, when winter and spring intersected, like lovers making up after a nasty fight, the weather edgy and unpredictable.

“There’s a lot of interest in this space.” Ronnie clutched her clipboard to her chest as she looked around. She could be looking at the inside of a spaceship and hold that same expression.

Motorcycle shops were going out of business, all over the place, including the one that had recently vacated. After suddenly finding herself on Three Rebels Street last week, in front of a shop-apartment combo for sale, Delaney had done her research. The previous tenants, who she now knew had been evicted, were brothers who ran a shop by day and lived upstairs by night. They sold mostly new bikes and motorcycle gear. Repairs and maintenance were basic. Their website was still up, despite the fact that Dude’s Bikes had closed. Dude’s appeared to focus mostly on male riders, leaving Delaney to wonder if Dude’s was just about dudes or if one of the owners was, indeed, named Dude.

“What’s the story on this place?”

Ronnie glanced at her clipboard. “The owner wants to sell. After the last renters’ lease ran out, they were given the option of buying or moving. I don’t think their shop was doing well, because they couldn’t afford to buy. They weren’t even paying their rent. And they weren’t quick about moving. The rest, as they say, is history.”

If the last motorcycle shop had failed, buying would be a gamble. But any business venture was a gamble.

Life was a gamble.

“There are a couple of people looking, after you.” Ronnie continued, “About five.”

Delaney could respect white lies in the sales biz but seriously? Five? Five or so people were waiting to check out the bike shop with an overhead apartment suitable for one small, low-maintenance tenant? She had no idea how two brothers had managed up there.

She strolled through the space, wanting a good feel. She needed to touch things, inhale the shop, draw its molecules into her lungs and taste its history before she could decide on the symbiosis of her dream space. Triple M Classics—short for Martin Monroe’s Motorcycles, named after her father—would own her as much as she would it, so this relationship was going to be deep and mutual. Through the front window, she could see the parkway that ran the length of the county. At just past eighteen-hundred hours, rush hour was a jam of red taillights in the waning daylight. No amount of time would erase Delaney’s memory of her last tour here, when she had to commute to work every day. Pure hell. It would be nice to go right upstairs to her cozy little apartment after closing, rather than having to sit in that mess.

Across the street was a row of shops, including a grocery story and an Italian restaurant. Food. Check.

On the south side, the shop butted up to the woods, which had a downward slope of grass and weeds that led to the trees. Privacy. Double check. Plus, Delaney figured if there was a tornado, that slope could count as a ditch, and would probably be the safest place to run. She laughed at herself. This wasn’t Omaha. Virginia tornado season consisted of a few warnings that rarely panned out.

Delaney withdrew the listing, printed from the internet, from her back pocket, crammed together with a grocery receipt for extra firm tofu, Tater Tots and Ben and Jerry’s Cherry Garcia. “This is the price, right?” She handed over the paper. Money would be tight, but Delaney should be able to manage for a little while until things got going.

That is, if she was going to do this.

Was she really going to do this?

All her adult life Delaney had moved around, from station to station. Forts, camps, bases. Not shops. Not homes. She’d never put down roots. Never had anything permanent other than her childhood home with Dad. Never owned a thing she couldn’t cram into a duffel bag.

Ronnie looked at the paper. “No.” She sniffed. “There’s a newer listing.” She flipped through her clipboard, laid it on the counter and pointed. “Here we go.”

Delaney looked at the asking price, choked a little bit, almost thanked Ronnie for her time and left. That would be the smart thing to do. Sometimes childhood dreams just needed to stay dreams.

She strode around once more, mentally saying goodbye to everything that she’d never even made hers. Even though all of this had been a panster move, it felt like all the blood in her veins had been replaced with disappointment. She stopped by the far wall, where a ratty piece of paper hung by a sliver

of tape. Delaney smoothed out the curled edges and read the flyer.

The event was in July. There was a contest, including prizes. The grand prize for the winning classic cycle was five grand plus a feature article in Ride magazine.

The disappointment started to drain away. Five grand wouldn’t pay all the bills, but exposure in a major motorcycle magazine would be a boon for business. Plus, there was something about that poster, just hanging there like that. 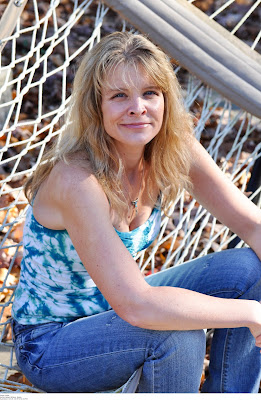 Elysia Whisler was raised in Texas, Italy, Alaska, Mississippi, Nebraska, Hawaii, and Virginia, in true military fashion. If she's not writing she's probably working out, coaching, or massaging at her CrossFit gym. She lives in Virginia with her family, including her large brood of cat and dog rescues, who vastly outnumber the humans.