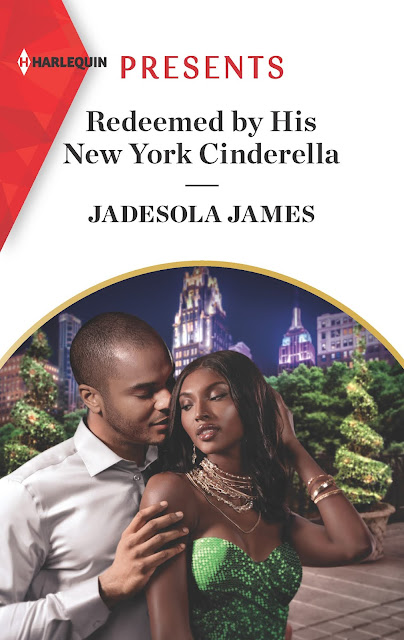 What if the man from her past is the key to her future? Don’t miss Jadesola James’s thrilling romantic debut for Harlequin Presents!

She could save him…
If only he’d let her!

Kitty Asare will do anything for the foundation inspired by her tumultuous childhood. Including charming her way into Manhattan’s most exclusive gala…then sparring with the man from her past who catches her there!

To land his next deal, Laurence Stone needs a stunning woman on his arm. Kitty agrees to the ruse for her foundation, but the electricity between them is more than make-believe! After breaking away from his family, Laurence vowed never to need anyone. Yet could Kitty be the exception to his rule?

Add Redeemed by his New York Cinderella to your Goodreads!

Buy Redeemed by his New York Cinderella by Jadesola James

Momma Says: 3 stars⭐⭐⭐
It's a fake girlfriend romance for this Cinderella. This story is well-written and fast-paced, and I liked Laurence. That said, it took a while for me to warm up to Kitty, especially with some of the things she does at the beginning - it was hard to picture her as Cinderella in light of her behavior. Anyway, as I mentioned, I really liked Laurence, and as fake romances go, I like the way Jadesola James did this one. As I understand it, this is her Harlequin debut, and it may have taken some doing for me to get behind these two as a couple, but by the end, I was convinced. So, with that in mind, I'll be interested to see what she does next.
🞿🞿🞿🞿🞿

Laurence was relieved to see that the dining room was empty, except for a young woman seated alone at a table in front of a large stone fireplace.

“Do you mind, sir?” A harried-looking waiter ushered him to a table close to the young woman’s. “We’re short on staff right now, as there’s an event taking place in a couple of hours. They’ve closed off most of the dining room.”

It mattered little to him, and as the waiter fussed about with clean linen and water glasses, and a long, rambling recitation of the wine list, he found his eyes lingering idly on his dining room companion. She was tucking into an enormous meal with so much enjoyment he stifled a smile. She hadn’t skimped on quality, either. On her table he identified the remains of a caviar starter, oysters, and a steak smothered in fresh mustard greens.

He blinked, looked up. “A glass of whisky and water, please. And those oysters—” He gestured at the young lady’s table. “Are they grilled?”

“I’ll have those, and the new potatoes in cream.”

The waiter swanned off, and Laurence was left to feel annoyed at the fact that he’d have to log into his email manually, since his rarely used personal phone had none of the many apps he used to keep his work organized. He hadn’t used it in a couple of weeks, and he felt a rush of physical relief as he switched it on and began to scroll.

He was halfway through a report on viewing statistics for a motorbike ad when the waiter came back with a bread basket, dropped it off with little ceremony, and headed over to the young woman’s table.

“Are we all set, then, ma’am?” he heard the waiter say solicitously.

Laurence listened with half an ear; he was curious to hear what such a voracious eater’s voice sounded like.

She spoke quietly, almost inaudibly. Her voice possessed a low husk that, despite himself, made him look up. It was familiar, in that elusive kind of way that nagged until finally the brain identified it. He registered wide eyes in the clearest shade of brown he’d ever seen, a full, bow-shaped mouth painted berry-red, and a dimpled chin before he looked back down at his phone.

Pretty, he thought idly. He’d look up again when she stood, see if the body matched the face. And there it was again—that sense of déjà-vu. Who could she possibly be? He’d gone to university abroad, so that was out. She looked far too young—and too broke—to be a client. Perhaps one of the many interns who filtered in and out of Laurence & Haddad each summer? No, it couldn’t be that; he avoided them like the plague.

“Shall I charge it to your room, ma’am?”

At that, Laurence did look up. He knew for sure that the woman wasn’t staying in Suite 700, because that was his room.

Brazenly, she signed the bill with a flourish, and took a long, last sip of champagne with every indication of pleasure before looking up. She had the gall to shoot him a shy smile and lowered her lashes, touching the napkin to those soft, full lips.

When she isn't writing, she's a reference librarian and a scholar of American romance publishing. Her hobbies include collecting vintage romance paperbacks and fantasy shopping online for summer cottages in the north of England.

Find Jadesola and news about her upcoming books on Twitter at twitter.com/JJ_Nicola!