Kris Claus has spent her entire life preparing to become the next Santa Claus. After all, she’s Santa’s daughter, so she’s certain to be next in line for the title. She’s gotten the degrees, served as his assistant… nothing can stop her. Well, nothing except her lawyer ex, who is trying to sneak his way into the title by bringing up an archaic gender law that says women can’t be Santa.

Steeped in small-town politics and a rivalry for the ages, Kris won’t stop until she’s gotten what she’s fought for her whole life, but she won’t give up who she really is — a proud woman — to reach her dreams. When a letter from a transgender girl down South reminds her of herself as a child, Kris knows exactly what’s at stake, not just for her own dreams, but for the dreams of girls everywhere.

Kris had seen her father speak countless times in this same setting, and in similar ones, like pep talks at the factory or town square summer celebrations. But none of his speeches were as exciting as this one, the Honor of Christmas speech that took place every December 21. This was the big one, the important talk everyone came out to see.

Stationed in the front row, here before anyone else, was her mother. She smiled and gave Kris a small wave, and Kris made a heart shape with her hands. Her mother was wildly supportive of her, and as much as Kris knew it had to be killing her not to make a sweep of the room and ensure everything was just so, she stayed seated, allowing Kris’s efforts to shine. The faith she had in Kris’s planning ability—or at least, the way she didn’t try to correct any tiny errors—warmed Kris’s heart. Instead, she stayed in place, looking regal in her velvet suit-dress. She was certain Ian had custom-made it in a complementary silver as soon as Kris had suggested blue and silver to The Council for approval.

She glanced up at the silver aisle they’d made minutes before, watching The Council’s members shuffle in. Mrs. Hazel Butterquil, always punctual, entered in her velvety cape that she always refused to hang on one of the cloakroom hangers because “that would ruin the majesty of it, wouldn’t it, dear?” Kris couldn’t help but smile. Mrs. Butterquil was a sweetheart, and she had buttery-soft hands every time they greeted each other before a meeting. Behind her, her husband filed in, cap in his hands and bald head gleaming in the twinkle lights. He was demure and calm behind his wife. She took her seat at the council table, and he sat in the front row, always supportive of her. Kris had dinner at their home on many evenings, usually listening to her father calm Mrs. Butterquil, who thrived on tradition and needed her father’s reassurance that most changes approved by The Council would be mild.

Moments later, Ian Napperly, the town tailor and youngest member of the council, short and slender, with sleek brown hair slicked back with pomade, filed in and took his seat next to her. Kris couldn’t hear their conversation from across the room where she stood, but she could imagine the quiet pleasantries they exchanged. Mrs. Butterquil pulled a small baggie from her purse and passed it to him, almost under the table, but not out of sight. Kris’s mouth watered. Homemade kettle corn! She was jealous. Mrs. Butterquil always made homemade kettle corn for her favorite people. Kris had been the lucky recipient several times, but today Ian was bestowed with that special honor, and she found herself longing for the sweet, salty flavor.

A handful of other council members shuffled in behind them. Carin smiled and waved timidly at Kris, and Kris waved back, wishing she knew her better. She was a new addition, and Kris had heard her speak up a few times, but mostly, Carin was on the quiet side. Her short blonde bob waggled slightly when she returned Mrs. Butterquil’s greeting. She was so lovely though.

Kris marveled at how The Council had changed over the years, as some members retired and ceded their seats to others in the town. Eleven members in total paraded past, and Kris waved at the ones she liked best. She shouldn’t have been playing favorites, but she couldn’t help it.

Tailing them all, Mark Crinkle—the senior one—stepped along, heavy footsteps thudding behind the rest of them. He situated himself in his seat and leaned across Ian to talk to Mrs. Butterquil. As he removed his scarf, his beard was brushed out of place, moving right back where it had been when he leaned back in his seat again. Kris gave him a small wave, and he gave her a quick, curt nod in return.

Mark Crinkle, Sr. was so different from his son, more stern and solid, but regal in a way that almost but didn’t quite read as arrogant. Mark Jr. was easier to be around. He was a pleasant, happy man with slender fingers and long limbs, gangly and lean. He walked like a baby giraffe, sometimes stumbling over his own feet like he didn’t have full control over himself. However, he and Kris looked like polar opposites, she short and chubby—she greatly preferred chubby to “round,” or the other terms people sometimes used to describe her father—and him so tall and thin. He stood across the stage from her, beaming as she flashed him a wide grin.

Megan leaned over to her. “Stop flirting,” she teased.

“I can’t help it!” Kris grabbed her arm tightly. “He’s so handsome!”

“I see the thrill hasn’t worn off yet.”

The thrill really hadn’t worn off. A month out from their engagement and she still got butterflies every time she saw him. That, or when she caught sight of the beautiful ring on her finger, the soft curls of silver around a central, teardrop stone. He was her dream match. The humor wasn’t lost on her that soon she’d be Mrs. Crinkle. As in, Kris Crinkle. Close to Kringle, but not quite spot-on. But then Mark grew still and stood up taller, and he stopped winking and waving. A hush fell over the room, with parents ushering their children back into their seats, and the sound of people unwrapping cough drops or gum grew quiet too.

Santa entering made everyone more reverent, quiet, and calm. Kris beamed at the sight of her dad walking up the silver carpet, his shiny black boots leaving no trace of dirt, barely even an indentation in the thick pile as he made his way across the floor.

Mark Sr. stood up and walked to the podium. “Now presenting, for his annual Christmas speech, Mr. Santa Claus.” From here, Kris could see her mother’s face light up at the sight of Mr. Claus, the love radiating off her. There was something so inspiring about their connection, their constant companionship to each other even after all these decades together.

He shuffled back to his seat just in time for Santa to step behind the wooden podium, brighter with the addition of the garland and some carefully placed baubles.

“Hello, everyone,” Santa began. “And a very, very Merry Christmas to each of you.” 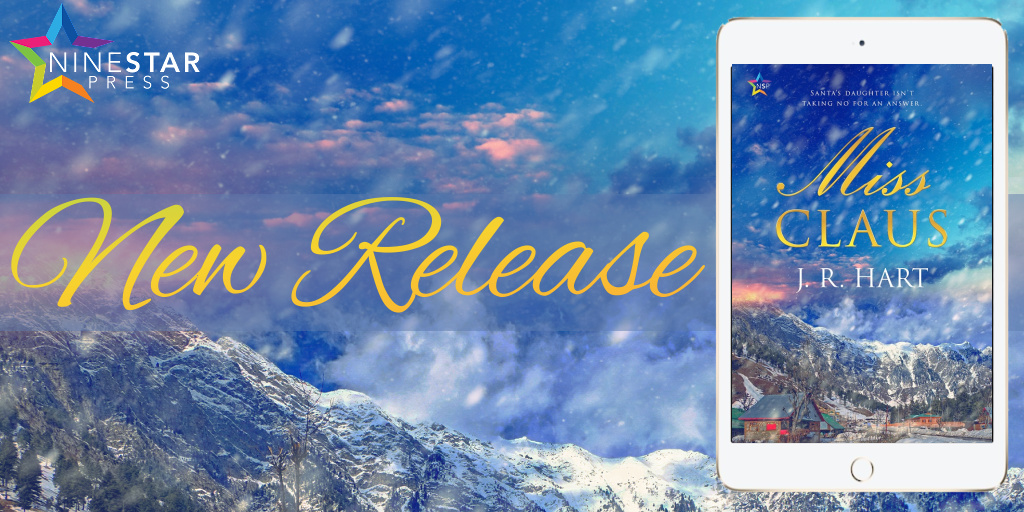