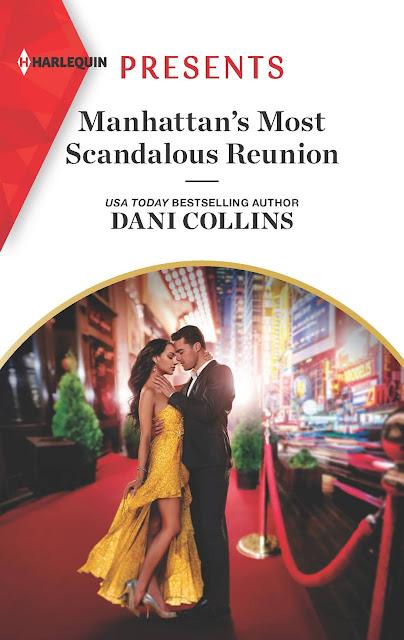 He can’t turn her away, and it has nothing to do with the media storm outside his penthouse! Enjoy this sizzling romance from USA TODAY bestselling author Dani Collins.

She left him.
That doesn't mean she's forgotten him.

When paparazzi mistake Nina Menendez for a supermodel, she takes refuge in her ex’s New York penthouse. Big mistake. Guarded Reve Weston is incapable of emotional intimacy—and is intensely seductive…

Reve has had enough of scandal. To keep his name out of the tabloids, he insists Nina stay with him. But as their spark reignites and she shares the mysteries of her past, Reve realizes his cynicism has a downside. If he can’t give Nina the fairy tale she dreams of, he’ll have to let her go…for good!

Add Manhattan's Most Scandalous Reunion to your Goodreads!

Momma Says: 3 stars⭐⭐⭐
First, I admit that I haven't read the first Secret Sisters book, but I feel like this one worked well as a standalone. If I was missing anything crucial, I didn't notice it. What I did notice was that Reve and Nina wore me out. I'm not sure which of them was the bigger mess. Dani Collins does make their back and forth worth the journey, and when they're together, they have good chemistry. I did like the sisters separated at birth storyline. I've seen it before but not often, and it does make for an intriguing story. The book is well written, and even though it took me a bit, I did like the characters and ended up rooting for them.
🞿🞿🞿🞿🞿

Dear God, they were everywhere. She was surrounded. Her airway tightened and her wild gaze swerved every direction, seeking a path of escape.

A blue-and-silver awning struck her eyes. She had walked in this direction unconsciously on purpose because, deep down, she was a masochist.

Normally, she would have stayed on this side of the street and glared upward as she walked by, but in her agitation, she darted straight for the entrance, not computing that she was running into traffic.

A car squealed its brakes and stopped on a dime right before it would have struck her. The driver laid on the horn, then honked again as the horde of cameramen chased her, all of them batting and bumping into the car in their haste to get around it.

Nina brushed past the startled doorman and ran inside, straight to the security desk where Amir sat today.

“I’m sorry. Please, can I stand here a few minutes while I figure out what to do? They won’t leave me alone.”

She was quivering with reaction, breathless and barely able to speak. She looked back to see the doorman holding out his arms while he ordered the men, “Back off! No entry.”

Amir frowned at her, then at the disruption outside. One of the men evaded the doorman and pressed his camera lens to the window, clicking and flashing through the glass.

Amir picked up his phone and dialed.

Was he calling the police? Nina’s scrambled brain tried to decide whether she should involve them.

Her stomach began to churn. She held her breath in dread-filled anticipation.

“Yes, I understand, sir. But she seems upset.”

Her heart stalled out. How humiliating. After seducing her and leading her on, Reve had dumped her when she had asked if he wanted to meet her father. Three months later, he didn’t even want to see her.

She covered her face, turning her back to the windows so she had a shred of privacy while she tried to think of where she could go or who she might call. The few friends she’d made in New York had fallen away when she’d been fired and moved in with Reve. And the friend who’d gotten her today’s interview lived in London. The one who was loaning her his studio was backpacking in Australia.

She didn’t know what to do. She was upset by more than the fact those men had chased her. It was everything that had happened lately. Her ears were rushing with the sound of her galloping pulse. Her life was falling apart at the seams, but she couldn’t crawl home this time. Where was home? Who was she?

“Miss…” Amir’s voice was loud enough to make her jerk her head up. His frown told her he’d had to repeat himself to get her attention. She saw he had opened the doors for Reve’s private elevator.

“Mr. Weston will see you. Would you like me to come with you? You seem unsteady.”

She stared into the elevator, longing to see Reve even though she knew he only pretended to rescue damsels. Deep down, he was more of a dragon who lured them in and ate them.

Still, she could hear the doorman arguing with the men outside. She had to leave the lobby so they would disperse. She desperately needed to be transported out of her entire overturned, mixed-up life, and, God knows, Reve’s world was the furthest thing from her own.

When Canadian Dani Collins found romance novels in high school she wondered how one trained for such an awesome job. She wrote for over two decades without publishing, but remained inspired by the romance message that if you hang in there you'll find a happy ending. In May of 2012, Harlequin Presents bought her manuscript in a two-book deal. She's since published more than thirty books with them and is definitely living happily ever after.