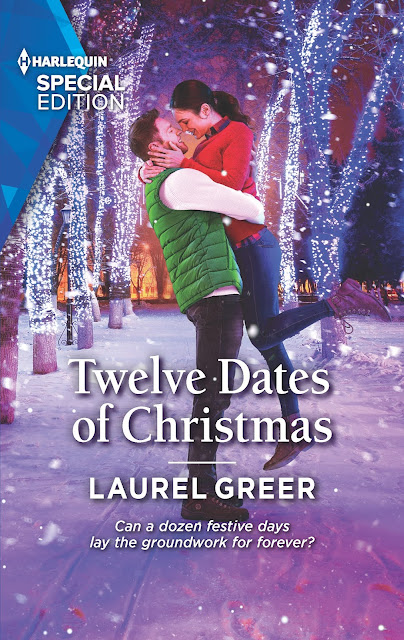 When a local wilderness lodge almost cancels its Twelve Days of Christmas festival, Emma Halloran leaps at the chance to convince the owners of her vision for the business. But Luke Emerson has his own plans—to keep the lodge in the family and protect his grandfather’s legacy. As they work together, Luke and Emma are increasingly drawn to each other. Can these utter opposites unite over their shared passion this Christmas?

Add Twelve Dates of Christmas to your Goodreads!

Momma Says: 4 stars⭐⭐⭐⭐
I really enjoyed Twelve Dates of Christmas. I'm a sucker for a small-town romance anyway, so it wasn't hard to fall into this one and stay there. The story is full of feels, and it also has plenty of witty banter, which is a winner for me. I think the thing I liked best was that it was a Christmas romance with a fantastic couple and a wilderness lodge, but it's not completely cheesy. Laurel Greer makes these characters feel authentic, and their story is a great combination of romantic and fun.
🞿🞿🞿🞿🞿

And while he didn’t get why the Brownie leader was intent on making the tree into a rainbow bird, he wanted to do right by the kids. The small troop had asked him to help—a request that had earned a storm cloud of a frown from “Ms. Emma”—because he was the tallest person present who wasn’t already working on a tree. The girls also seemed to think being the local game warden gave him some sort of magical knowledge about bird-themed crafts. If feather number one hadn’t proved them wrong, feather two sure had.

No matter. He couldn’t disappoint the girls, even though he had electrical cords to run, spotlights to position and a staff to organize. And at the top of his to-do list: keep his grandfather from leaving his house to survey the action.

Luke gritted his teeth at the possibility of Hank Emerson trying to hook up the power connections for the trees while hacking up phlegm from his pneumonia-ridden lungs. No. Hank was going to keep his stubborn ass fixed to his well-worn couch for the next twelve days, and Luke would do everything else that needed doing.

He got into a rhythm, fully covering the high-up branches the little girls couldn’t reach with their shorter arms and rubber cement.

“Now the sparkles.” A Brownie peered at him hopefully as she held out a can of spray paint. No, spray glitter.

The girl pressed the can into his hand. “We want it on the edges.”

“You got it.” He was asking for a dressing-down from Emma for following the girls’ instructions instead of hers, but she was nowhere to be seen and time was running out. With a careful hand, he sprayed the tips of as many feathers as he could. The Brownies oohed and aahed.

Choking on the fumes, he stepped back, forcing a straight face as he took in the eyesore. It was a good thing every charity or youth group who entered the twelve-day contest received at least a portion of the total funds raised. If the money was solely awarded to the first-place team, the Brownies wouldn’t have a chance at the new canoes they hoped to afford.

The Brownies were clearly of a different mind. They gazed at their creation, faces shining as bright as the pink-and-blue lights Emma had wound through the branches at exact one-inch intervals. Feathers filled in the rest of the spaces. An extra-large papier-mâché pear, wrapped in green, raindrop-size LED bulbs, topped the kaleidoscope monstrosity.

A pear in a partridge tree.

He spun, facing Emma Halloran and her glossy red smirk. It didn’t matter the occasion—Emma was always done up like she was anticipating an Instagram photoshoot.

And no matter how many times she shot his flannel shirts and muddy work boots a disdainful look, he still struggled to keep his eyes off her. Her wool coat hid the curves of her tall figure, but he’d been able to conjure a mental image of her sexy shape since she sat behind him in twelfth grade English class. He’d turned around so often, trying to bring a blush to her pale cheeks, he’d had to go to the chiropractor for a kink in his neck.

Not much had changed in sixteen years. Not her sleek brown hair begging to be mussed, nor her legs, longer than the Gallatin River.

Nor her love of getting under his skin.

Born and raised in a small Vancouver Island town, Laurel picked up her pen to write Julie Garwood fan-fiction during junior high English class. She hasn't put it down since. Ever committed to the proper placement of the Canadian "eh," she loves to write books with snapping sexual tension and second chances. She lives outside Vancouver with her law-talking husband and two daughters. At least half her diet is made up of tea. Find her at www.laurelgreer.com.