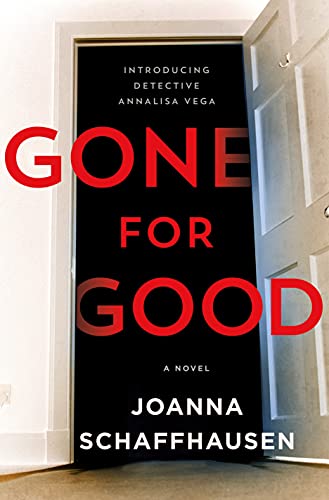 Gone For Good is the first in a new mystery series from award-winning author Joanna Schaffhausen, featuring Detective Annalisa Vega, in which a cold case heats up.The Lovelorn Killer murdered seven women, ritually binding them and leaving them for dead before penning them gruesome love letters in the local papers. Then he disappeared, and after twenty years with no trace of him, many believe that he’s gone for good.Not Grace Harper. A grocery store manager by day, at night Grace uses her snooping skills as part of an amateur sleuth group. She believes the Lovelorn Killer is still living in the same neighborhoods that he hunted in, and if she can figure out how he selected his victims, she will have the key to his identity.Detective Annalisa Vega lost someone she loved to the killer. Now she’s at a murder scene with the worst kind of déjà vu: Grace Harper lies bound and dead on the floor, surrounded by clues to the biggest murder case that Chicago homicide never solved. Annalisa has the chance to make it right and to heal her family, but first, she has to figure out what Grace knew—how to see a killer who may be standing right in front of you. This means tracing his steps back to her childhood, peering into dark corners she hadn’t acknowledged before, and learning that despite everything the killer took, she has still so much more to lose.

Momma Says: 4 stars⭐⭐⭐⭐
I started reading Joanna Schaffhausen's books with her debut, The Vanishing Season, and here we are with her fifth book and start of a brand new detective series - and I've thoroughly enjoyed every single one. This series gives us Detective Annalisa Vega and a murder that leads back to a cold case and a tragedy from Annalisa's past.
This author seems to lean toward protagonists who are broken by past trauma. Granted, Annalisa is certainly more well-rounded than Ellery Hathaway, but she still has her own issues to work on. And no, I'm not complaining, just thought it was worth noting. I evidently lean toward those broken protagonists myself because all my favorite detective series do as well. I think it adds to the personal connection and character development, so bring on the emotional turmoil.
That said, this one took a bit to get into the story and invested in the characters. Once things got going and whatever it is that makes a reader click with a character worked in me, Joanna Schaffhausen didn't let me down. The story is gritty and the path to the killer is a twisty one. Things also take a personal turn for Annalisa, and to be honest, I'm still not sure how I feel about the way this one wrapped up. That, of course, means I'm still thinking about it and mulling over all the details, the what-ifs, etc. I know I'll be very interested to see how the conclusion here affects things in book 2 of the series.
So, a new series by what has become one of my favorite authors - not a bad way to while away a weekend. And if you enjoy suspense and haven't met this author's work, what are you waiting for?