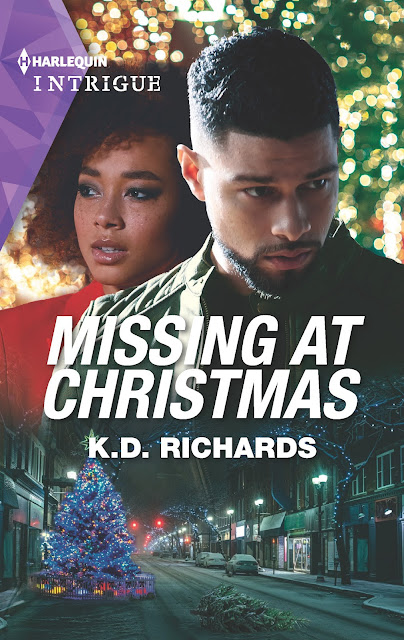 To bring her sister home for the holidays

They’ll put everything on the line.

Private investigator Shawn West is stunned when the attack victim he rescues is Addy Williams—the one woman he never forgot. She’s turning a quiet upstate New York town inside out to bring her missing sister home by Christmas. Shawn offers to help if she'll provide a cover for his own investigation into a suspicious company in town, but can they work together to find Addy's sister…or are they already too late?

Add Missing at Christmas to your Goodreads!

Momma Says: 4 stars⭐⭐⭐⭐
I read a lot of different genres, but romantic suspense is right up at the top of my favorites. Missing at Christmas is heavier on the suspense than the romance, which is a bit of slow burn, but the story is full of action and drama, and the pacing kept the pages turning. I really liked this couple, and Addy is my favorite type of heroine - she's capable, strong, and determined. There's no swooning, which is a great big plus for me. She and Shawn have good chemistry, and with everything going on in the book, I enjoyed the slow burn romance. This is the second in the West Investigations series, but it works well as a standalone.
🞿🞿🞿🞿🞿

The doors to the kitchen swung outward, and the man reappeared, a white plastic bag in one hand and Cassie’s picture in the other.

Addy slid her phone back into her purse and rose. The pity she saw in the man’s face as he drew nearer dashed the hope that had swelled in her chest.

“I showed your sister’s picture to everyone who’s still here, and no one recognized her. I’m sorry.”

Two solid days of showing Cassie’s picture everywhere she could think of in Bentham and nothing. No one remembered seeing her.

“Thanks, anyway.” She didn’t bother trying to muster a smile of thanks. She reached in her purse for her wallet.

“No charge,” he said, thrusting her food and Cassie’s picture at her. “You take care of yourself.”

Addy looked up into the man’s now compassion-filled eyes and wiped away the single tear she couldn’t stop from falling. “Thank you,” she croaked out before turning and fleeing the restaurant before the dam of tears broke.

Silver garlands hung from the streetlamps along with fluttering signs ordering the denizens of Bentham to have a happy holiday. The lamps themselves were spaced too far apart for the weak yellow light they cast off to beat back the dark December night.

Five blocks west, cars coasted along one of Bentham’s main thoroughfares, but the street in front of Addy was clear and quiet, the surrounding businesses having long since closed for the night.

She’d left the metallic-blue Mustang she’d rented for the two-hour drive from Manhattan to Bentham in the hotel’s parking lot. It was easier to canvass the neighborhood on foot. All she had to show for her effort were sore feet.

A footstep sounded as she pocketed her phone. Shooting a glance over her shoulder, she squinted into the darkness but saw no one.

You’re just not used to so much quiet, she thought, walking on.

She’d lived in New York City since she was twelve but spent summers on her grandfather’s ranch in Texas. She’d loved the ranch almost as much as she loved the city, but New York wasn’t called the city that never slept for nothing. There was always something to do and see, and she was used to being surrounded by thousands of people, even though she’d been very much alone since Cassie moved to Bentham.

A scraping sound came from close behind her, followed by the unmistakable sound of fast-moving footsteps.

She turned, intending to move to the side, when a hand clamped around her ponytail, jerking her backward against a hard chest.

It took a moment for her brain to catch up with what was happening, and by the time it did, her assailant had taken his beefy hand from her hair and clamped it over her mouth.

Addy fought her rising panic. Like any savvy city girl, she’d taken self-defense classes, but it had been a while since she’d brushed up. She’d never thought she’d actually have to use any of those techniques.

She tried to pull away, but the man’s arm was like a vise around her neck.

She didn’t believe that for a minute. She’d left the small gun she carried for protection locked in her car’s glove compartment, a decision she regretted now. Who’d have thought the streets of Bentham were more dangerous than Manhattan?

Well, she had no intention of going down without a fight, gun or no gun. She sent up a quick prayer and fisted her hands at the same time a yell came from somewhere in the night.

K.D. Richards is a native of the Washington, DC area who now lives outside of Toronto with her husband and two sons. You can find her at kdrichardsbooks.com.