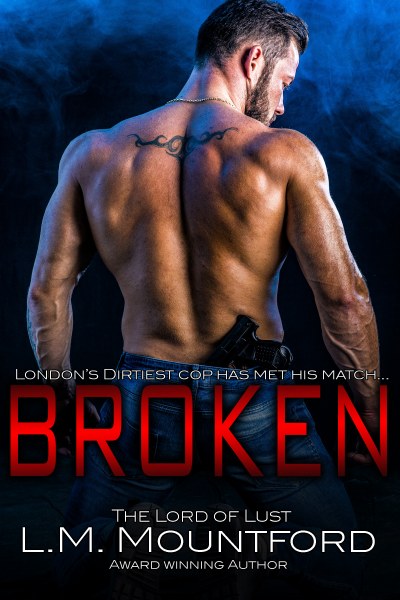 Vickey
Vickey Romano is a girl with a secret. A girl any man should be terrified of bringing home to mum.
Beautiful, haunted, and on the run, she works a string of temp jobs and lets no one get too close.
Until that is, she met Jake, the living definition of dark and dangerous.
He tells her nothing about himself, keeps a SIG P226 in his bedside table drawer, and can make her go weak-kneed with just a look.
She knows she should stay away, but he has her caught in his web and she's helpless to resist.
All she can do is hope her past doesn't come back to kill him...

Jake
Jake never played by the rules.
Rules were for team players.
He was a lone wolf. And a loose cannon.
But he got the job done.
And now his job was to take down Terry Daley, London's Mr Big.
There's just one problem, Vickey Romano.
The one that got away.
He wants her back, and he's not above dirty tricks to get her.

Broken is a hard and gritty dark romance. Hotter than Sylvia Day and sleeker than James Patterson or Sherlock Holmes. The opening in the Broken Heart Series balances sex and violence on a knife-edge and will suck you down the rabbit hole of South London's seedy criminal underbelly.

Christmas was only a couple of hours away and to mark the holiday, Seven had been decked in blue and white. Projectors in the ceiling made it look as if snowflakes were falling around the dancers who were writhing together through the clouds of dry ice fog enveloping the floor.

The floor-to-ceiling windows of the manager’s office made up the wall overlooking the dance floor. However, the view was lost on Jake. Are you down there?

The throngs were pressed so tight together, it was virtually impossible to tell one person from the next, but he could imagine her down there, writhing and gyrating to the beat against a faceless male, hot and eager…

His fingers twitched at the thought and he had to force down the impulse to reach for the sidearm hidden beneath his leather ¾ jacket. Though the P226 was his weapon of choice, the lighter, smaller, standard-issue Glock 17 was the more practical choice when it came to these messenger-boy jobs. Not only was it lighter and more easily concealed under a jacket, its all-polymer design meant it was less likely to set off the basic security systems and metal detectors found in civilian recreational areas.

Get a grip, man. It was ridiculous. He was being ridiculous. A slip of a girl, barely in her twenties. What had he expected? Marriage and happily ever after? Those were nothing but fantasies when you joined the Squad. Hell, if she hadn’t broken it off, he soon would have. For her sake if not his. She deserved better.

Shit! Jake had his hand in his jacket, thumb flipping the catch of the shoulder holster strap and his palm fastening round the textured grip of the Glock in the moment it took his head to whip back.

He relaxed, slightly, when he saw who was standing in the office’s door.

“When Mr Margrave said he was sending someone, I certainly wasn’t expecting it to be you of all people, Jake Talbert.”

“I wasn’t his first choice.” Jake agreed, letting his hand fall to his side. At five feet six and shaped like a propped-up bag of suet in a black, hand-made, three-piece suit, with a receding mop of hair more grey than black that curled at the sides and a pudgy face, Henry Yate was not what anyone would consider threatening. “But your message said it was urgent, and it’s Christmas Eve. The rest of the Flying Squad have plans, so here I am.”

Yate moved around the desk to sit back in the padded swivel chair with legs crossed and hands steepled in his lap. The pose was supposed to appear relaxed but only made his hands look like a bustle of fat little sausages. “I heard you weren’t about much these days. Word is, it’s been a busy couple of weeks for you.”

“They’ve had their moments.”

“I’ll say. Intimidating witnesses. Assaulting suspects. Not to mention beating that poor bugger half to death in a billiards hall. And in front of witnesses.” Pearly whites glinted as he fixed Jake with a smile that would very likely curdle milk. “I heard you’re out of control. Something about a bird blowing you out, giving you the Dear John routine. So now you’re under investigation, chained to a desk. You know, in these times of civil unrest, it’s a real comfort to know those brave boys in blue take the time to remember their duty and professional integrity. If only all law enforcement took such time to protect us law-abiding citizens from the filth that walks our streets.”

“And here I thought you drove everywhere nowadays?”

“Well, I wouldn’t let my unpredictability and violent tendencies bother you,” Jake said, with forced nonchalance as he walked around the desk to sit in the chair opposite the older man. These games were all part of the routine. “I had a bad break. I needed to vent, and that wanker in the hall decided to be a smart arse. So, we played a game of doctor.” He shrugged, leaning back and folding his arms. “He lost.”

“Yes, those clips on YouTube made that obvious. Shame they didn’t also show the firearm he allegedly had concealed on his person.”

“You know, the enquiry’s psychologist remarked on that too, but it’s hard to argue with evidence found on the scene.”

There was an adequate response to that, but Jake had to force himself not to bite. Yate was little more than a two-bit snitch, a common rogue with a number of dodgy businesses who made it his business to have all twenty little sausage digits in every dirty, bent, and stolen pie in London, and an ear to the ground in all the right and wrong places. He was the owner and manager of Seven, but it was a smokescreen, a bit of cloak and dagger, something to look good on the self-assessment. Yate’s true business was information, and he didn’t discriminate. It was no secret he sold to both the villains and the law of London but, because he never went too far and always threw both sides a bone, he was untouchable.

And the powers-that-be had decreed Jake must play this stupid fat fucker’s little games.

Yate went on. “Of course, your recent recommendation for the Saint George might have had something to do with that.”

Jake’s eyes narrowing. Now, just how did you learn about that, you slimy bastard?

“D-notices aren’t what they use to be.” Yate grinned, apparently reading his thoughts. “Out of curiosity, you killed how many Jihadists? Ten?”

“Six,” Yate parroted, his smile broad and knowing. “Quite a bit of luck you had there. And at such an opportune time. Extraordinary. I bet that put those CID boys out of joint. All that effort they went through to conceal the Browning. They finally have your balls in a vice, then you go and pull a stunt like that and the Chief Constable himself tells them to put it-”

“Yate!” Though he did not raise his voice above a whisper, Jake’s tone was sharper than a razor. “I have better things to do than listen to you crow all night. Now, are you going to tell me what’s so important that I had to come over here on Christmas Eve, or do I have to drag you down to lockup for the night for wasting my time?”

“The People’s King? You do surprise me,” Jake said in a tone dripping with sarcasm. “You’ll have to do better than that. He’s legit, remember?”

“Yes, but all jobs still require his seal of approval. This is still his town,” Yate pointed out. “There isn’t a major heist goin’ down in the borough that hasn’t received his nod of approval.”

“That may be, but that amounts to conspiracy, at best, and it’s bloody hard to get a conspiracy conviction without rock-solid evidence.” Jake eased back into the chair. “Everyone knows Terry’s in it up to his neck. Half the MET is working to drag him down off his podium and the other half are in his pocket. I know that whenever I arrive on the scene, Terry has his fingers in it, then flaunts his immunity by building a new wing to the children’s hospital on the proceeds. But so long as every villain I drag in keeps swearing he’s the mastermind, I can’t touch him. And no one is going to stand up in the Old Bailey, point to Terry Daley, and go ‘that’s him, your honour. That’s the geeza’. Nobody’s that stupid. Not after what happened to Stanton’s kid.”

“After his fall he was drawn to the block, and there his bowels withdrawn, and he was divided into four parts,” Yate recited. “Such a terrible way to die. And so young. They say Terrance himself gave Mad Dog the order.” Suddenly Yate’s small, watery rat-like eyes were fixed on Jake. The, his smile suddenly mocking, he went on. “To prove his loyalty, he butchered his own son before the boy could give evidence against Daley. Then murdered his wife for protecting him. Now he’s on the run. Tell me, did they ever find his daughter?”

A cold hand settled around Jake’s heart at the mention of the Stanton girl.

He’d heard the stories of Terrance Daley’s playroom. It was an underworld myth. A fabrication. Probably cooked up by Daley himself to add terror to his infamy. Even so, there were some things it didn’t bear thinking about.

“Such a sweet girl.” Yate pressed. “The boy I can almost understand, but to think a father might knowingly hand his own innocent child over to tha-”

“Harry, I’m beginning to lose my rag with you.” Emphasising Yate’s Christian name with deadly purpose, Jake had to force himself to stay calm. “The Flying Squad was formed to tackle commercial armed and unarmed robberies. Not chase leads on escaped convicts playing truant. Mad Dog Jack Stanton is a murderer, a thug, and an extortionist. He demands money with menaces and makes bodies disappear. He doesn’t get tilled to the nines and wave water pistols at cashiers’ heads.” He pushed up from the chair, braced his hands on the desk’s leather top and leant forward to look the other man square in the eye. “If you have information on where he might be hiding, I suggest you dial 999. Otherwise, unless you give me something tangible, you’ll be drinking your Christmas dinner through a straw in intensive care.”

A self-confessed tiger fanatic, L.M. Mountford was born and raised in England, first in the town of Bridgwater, Somerset, before later moving to the city of Gloucester where he currently resides. A fully qualified and experienced scuba diver, he has travelled across Europe and Africa diving wrecks and seeing the wonders of the world. 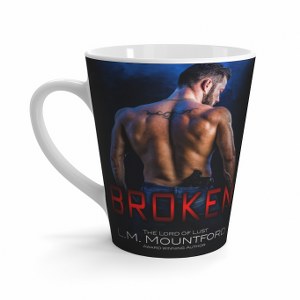