Haunted Ends 4: Dead in the Water 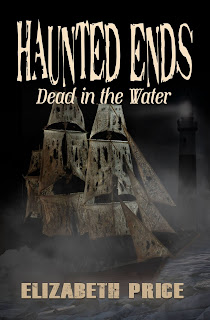 The crew of Haunted Ends is diverted from filming their show when a cursed and extremely haunted pirate ship, the Serpents Cross, docks off the coast of San Francisco. After repeated attempts by the Coast Guard to tow the pirate ship back to the sea have left many hospitalized, they call Rocky and Sam to help. The paranormal duo must persuade the Serpents Cross’ phantom captain to leave San Francisco Bay peacefully. However, if the Captain's requests are not satisfied, he has deadly plans for the citizens of San Francisco.

Five hours later, the three men stood by the shoreline, gazing out at San Diego’s clean skyline, each with their thoughts and feelings for the exact moment. For Rocky, his thoughts led him to the last time he visited San Diego. It was for a paranormal convention located not too far from where they were staying. For the life of him, he couldn’t recall attending the convention or even leaving the city after the convention. His mind was a fog of random images of the event. The convention took place during the time he and Rose were going through their divorce, and he had to admit, if to no one other than to himself, that he was drinking a lot.

“Good times,” he thought, his words escaping his lips.

“What was that?” Paul asked as he watched the sailboats skim across the water.

“Oh, nothing,” Rocky returned. “Are we ready to find Flores?” he asked his friends.

Sam shrugged as he scanned the area. “I am rather curious what kind of body he ended up with. The haunts back at the hotel have a betting pool going. Five to one odds say he went native,” he mentioned.

“The first post card we received was from South America, Brazil I believe. Melody expects will find him wearing a loincloth. Or maybe she’s hoping,” Sam explained.

“Then how did you know he was in San Diego?” Rocky asked, a little concerned that they were wasting time and a trip to San Diego.

“He sent me another postcard. You know, one of those “Wish you were here” written across the top and some bikini girl lounging on the beach. Though, I haven’t seen many beaches around here,” Sam pointed out.

“There’s a few, but not many.” Rocky noticed an empty pedicab driving by. “Come on. Maybe he’ll know where we can find Flores,” he said, waving for his two friends to follow. He gave a quick whistle to signal the driver.

The mid-twenty year old male driver raised his hand to show he heard Rocky. He swung his pedicab back around to wait for them.

“Thanks!” Rocky called as all three took seats in the cab. Sam sat in the middle. Paul motioned to the space between Rocky and himself, feeling chilled. He moved over, giving Sam more room.

The pedicab driver glanced to the large space between the two men.

The driver shrugged. “That’s cool. Where are you two heading?”

“Just because I’m invisible doesn’t mean I want to be treated like I am,” Sam grumbled back.

“Uh, okay. Guys, I don’t know—“ the driver’s voice cracked with his anxiety as he stared at the empty area between Rocky and Paul.

“It’s all good. Pretend you didn’t hear that,” Paul handed the driver a fifty. “We’re here searching for anyone out of the ordinary,” he explained.

“We’ve got plenty of that. How out of the ordinary are we talking?” the driver asked seriously.

“Like strutting around in a body like it’s a new suit, out of the ordinary,” Sam spoke up.

The driver shook his head, glancing to the ocean then back. “Look, I don’t know what your scheme is, but—“ he began. Again, Paul handed him another twenty. The driver paused, nodding. “He’s a ghost, right?” he asked, motioning to Sam. Rocky and Paul both nodded. “Is it his body you’re looking for?” he questioned.

“No, I’m buried in Los Angeles. My guess, the guy we’re looking for is either Mexican or Brazilian, something like that,” Sam mentioned.

The driver scratched a small patch of stumble on his chin. “You know, I think I might know the guy you’re looking for. Juan, works the convention route. He struts around like his body… like it’s is a new suit or something, yeah, yeah.” He pointed to Sam, agreeing. “That’s it exactly. He’s a real freak show to watch.”

“Juan?” Rocky questioned, scowling at Sam. “That sounds about right. Can you take us to him?”

“Uh, yeah, sure thing.” The driver began to peddle down the walkway, not once looking back.

“I can’t believe you sometimes. Why do you have to do that?” Rocky grumbled to Sam.

“Do what?” Sam questioned, toying with him. He knew exactly what Rocky was talking about. Meanwhile, Paul leaned to the right side of the pedicab, pretending not to be part of the group. 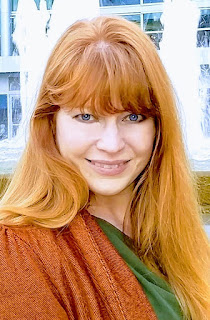 Elizabeth Price is best known for her Paranormal Mystery series Haunted Ends, which makes light of the dark side of death. Born in Southern California, Elizabeth has always been drawn to Science Fiction and fantasy stories. Having also lived and worked in haunted buildings for many years, she has a deep interest in the paranormal and anything that goes "BOO!" in the night - with the exception of critics that is.

Elizabeth Price will be awarding a $25 Amazon/BN GC to a randomly drawn winner via rafflecopter during the tour.

a Rafflecopter giveaway
at November 01, 2021