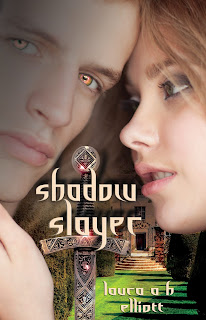 Shadow Slayer
Shadow Series
Book Two
Laura A.H. Elliott
Genre: YA Paranormal Romance
Publisher: Ghost Press
Date of Publication:  September 28, 2012
ISBN: 978-1479388189
ASIN: B009CJ5DXE
Number of pages: 184
Word Count:  54,298
Cover Artist: Laura Elliott
Tagline: Shadows Will Do Anything To Become Human
Book Description:
Shadows will do anything to become human. You see their influence every day. You say things you don’t mean or do things that aren’t like you. You look different. Friends you’ve known forever suddenly never call.
As a freshman, Roxie just wants to fit in which is impossible because she barely runs into her friends at her huge high school. Adrianne’s disappearance and Hayden’s attention rock Roxie’s world. But nothing rocks it like the most gorgeous guy at school, Drew. And nothing is more important to Roxie than astral projecting back to Planet Popular to solve the mystery of the map.
But that changes when Drew invites Roxie to homecoming. Hayden warns her that something’s wrong. Why would a guy like Drew like Roxie anyway? Drew must want something. Hayden’s right. Drew is different. Planet Popular was just the beginning. Part of a bigger world, the Shadow World.
There’s a war brewing between the world of humans and the world of shadows. When the shadow invasion begins at Roxie’s high school, she’ll not only fight for her life but the lives of her family and friends when she discovers she’s the Shadow Slayer, the one human who can save Earth from the shadow onslaught. But Roxie can’t even kill a spider.
Oh yeah, there's an evil English teacher, an enchanted play, a sword of Sandonian steel, a homecoming of horrors, and seven magic words too. 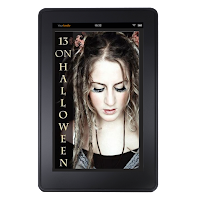 Book One- 13 on Halloween

I stroke one cheek and then the other with blush and remember standing with Drew at the bonfire. The last night we went out as boyfriend and girlfriend. The last night he was human.

On your 13th birthday, you get the call. By your 14th birthday you find out what the call is.

Everyone I know is in the audience tonight––Ally, Mom, Dad, Brian, even my brother, Mitch, because he came home for my birthday. We’re having our family dinner tomorrow night since tonight the cast party’s at Drew's house, unless I decapitate him first.

“Roxie five minutes,” Hayden yells into the girl’s locker room. As usual I’m the last one out. I sweep my hair up to the side and try to remember my first line. For some reason it’s the one I always forget.

I open locker 316, grab my sword and just as I step outside of the locker room, Wanda runs up to me and starts talking non-stop about her nerves and how they’re getting worse and worse.

“What’s that?” she asks. I stop cold in my tracks at the backstage door.

“There are lots of words for things that don’t exist––the unseen. Like monsters and aliens and dragons and vampires and ghosts,” I say sort of in a trance.

“If they don’t exist, why are there words for them? All the stuff I thought was crazy really isn’t crazy at all,” I say, finally getting what Drew was trying to tell me at the bonfire at the estate at homecoming. What the human Drew said before I danced with his shadow. My role in the unseen, the shadow world. Still, I don’t know so many things. Like, what happens to a shadow once I slay it? And where do humans go when their shadows invade? How can I save my human friends?

“Roxie, I caught you! I was so late because Brian’s car got a flat. He fixed it so great, I couldn’t believe it. It’s like he went to badass school or something,” Ally says, laughing.

“Ally. Finally!” We hug. I swallow hard. Brian. Fixed. A. Flat. I mean it’s not brain surgery. But believe me, if it doesn’t have an LCD screen, my brother Brian doesn't think it exists. He doesn’t know how to fix a flat. O.M.G. Brian is probably a shadow too.

As a teenager, Laura’s love for story began in the Amazon where she waterskied with piranha while learning of head hunters and curses. In addition to being a ghost, she’s the author of five books and is a contributor to lifestyle and travel magazines. She has a passion for travel, particularly life at sea, and makes her home in Santa Cruz, CA with her husband, daughters, and their families. No matter the language barrier, perceived danger, altitude, squalls, fashion faux pas, or ingested gluten, she writes to inspire with a focus on journeys of the heart—always on the lookout for great champagne and a pair of red shoes.

You can find her at Laurasmagicday.com, @Laurawriting on Twitter, @book_laurasmagicday on TikTok, and on Goodreads too. 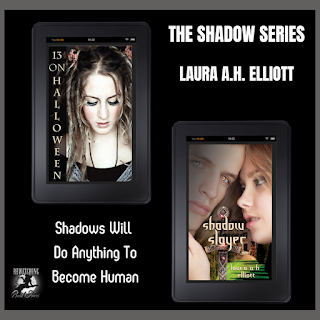 a Rafflecopter giveaway
at November 08, 2021