She Died on a Monday by Kevin McLeod Virtual Book Tour 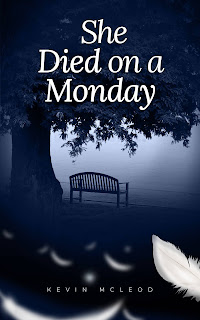 She Died on a Monday
Kevin McLeod
Genre: Love Story, paranormal
Date of Publication: 20/09/2021
ISBN: 979-8469680987
ASIN: B09DYZ1D4W
Number of pages: 50
Word Count: 8886
Cover Artist: Theresa Bills
Tagline: What do we do when everything changes in an instant?
Book Description:
Picture the kind of enduring love that most of us would wish for; the kind of elderly, married couple we might see on the street, or in a café, so in tune with each other that it’s hard to imagine one without the other.
John and Elizabeth have a love like that, but John’s world is suddenly shattered when Elizabeth is brutally taken from him. For some people it can feel as though it’s just too difficult to go on when one half of you is missing. How will John cope with his broken heart? Who, or what, can help him?
Kevin McLeod is a best-selling children’s author, but this is his first adult short story, inspired by the love his grandparents shared. Kevin writes beautifully, in heart-rending detail, about the numbness, shock, and crushing grief that John faces. He explores challenges that we will all face when someone we love dies, made all the more poignant by his tender evocation of a long and happy marriage.
‘She Died On A Monday’ is a story of love and loss that you’ll want to read time and again, to enjoy each perfect detail and the clever twists and turns. But, be warned, you might just cry every time that you do.
Amazon

She died on a Monday. No long lingering illness. No last words, just there, then gone. One minute they were sharing breakfast, the next his world collapsed. She was falling too fast and he was moving too slow. Later, the doctor would tell him that it didn't matter how fast he had moved. He couldn't have saved her. Like that makes it ok. As if that would make him feel better. It mattered to him. He should have caught her and helped her; instead he had moved in slow motion as the love of his life, his very reason for living, disappeared in front of his eyes.

There was no warning. She had been healthy and happy. Ten minutes before she died, they had been discussing what to do after breakfast. He remembered scoffing at her suggestion that they should visit his sister. He tried to remember the last words he had said to her. Finally, they came back to him. Is there any toast? Such a normal question, but now it seemed so stupid, so banal. If he had known they were going to be his last words to her he would have said something meaningful, something profound.

Later, the doctor would tell him that it had been an aneurysm in her brain and that she had felt no pain. Should this comfort him? If it was supposed to, it didn't. Somehow the suddenness made it worse. Neither of them had been prepared for this. The numbness he felt began cocooning him in his own sorrow.

At some point, he didn't remember when, his daughter arrived. She was talking to the medical crew. She turned and began to talk to him. He couldn't make out the words. The lines of her face were blurred by his tears and her words were unable to penetrate an overwhelming numbness.

They took his wife's body away, carted it off on a trolley like she was nothing. He wanted to yell at them, to make them do this terrible thing in some different way. Instead, he sat and watched while his daughter hugged him. He was vaguely aware he wasn't hugging her back, his arms unwilling to move.

He found himself on the couch, unaware of how he had come to be there. His daughter was on the phone and his son had arrived. His son was looking in drawers and speaking, but he couldn't make sense of it. He heard the word funeral and slowly his brain began to understand. His son was looking for the funeral plan papers. He managed to tell him where to find them. His voice was quiet, broken, as he mumbled through the words. His son put a hand on his shoulder and gave it a gentle squeeze. A simple act of love from a son to his father. He put his hand over his son’s. No words were said.

He couldn't accept it, wouldn't accept it. His wife couldn't be dead. They had so many plans. So much to do. How could she be gone? They were due to go on holiday next month. It was all paid for and arranged. She had been looking forward to it. They both had. Now, they would never get to see those views, or take that boat trip. The same one they had taken on their first holiday together.

After a few hours of helping and being there for him, his son and daughter left. His daughter had asked to stay with him tonight, or for him to come with her, but he wanted to be alone. He managed to thank them for helping, while ushering them towards the door. He shut the door, instantly becoming aware of the silence. It crashed into him like a wave. There were no sounds coming from the kitchen, or from the radio in the living room. She always liked to listen to the same channel, keeping it on for some background noise. He walked to the living room and switched on the radio, as if this would bring her back. Feeling foolish, he turned it off again.

He lay down on the couch and cried himself to sleep.

He heard her voice so clearly that he woke with a start and sat up straight. Confusion took over as he tried to work out whether it had been a dream or if he had actually heard her voice. He looked to the large window, the one with her favourite view over the city from their fourth-floor apartment. It was one of the reasons they had bought this place, she loved that view. It must be late, as darkness had replaced light while he was sleeping. He turned on a lamp and went to shut the curtains. He froze, as just for a second, he swore that he saw her behind him. He turned to the living room but found only emptiness.

He drew the curtains and went to the kitchen. The clock on the wall told him it was a quarter past ten at night. He hadn't eaten all day and knew that he should. He went to the fridge and found a sandwich that his daughter must have made for him. He sat at the table, the same table where she had died, and stared at her empty space. Slowly, he ate the sandwich, tasting nothing.

He walked through the hall to their bedroom. Sitting on the edge of the bed, he stared at her side. Suddenly he felt it, her touch. He couldn't explain it, but he felt her. She was here, she was with him. But, as quickly as the sensation came, it left. His mind was playing tricks on him. It surely was understandable; he was processing the enormity of what had happened. He didn't bother to undress. Lying down on the bed, on top of the covers, he curled into the foetal position and began to cry.

She died on a Monday. 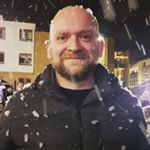 About the Author:
Kevin McLeod is the international best selling author of The Viking’s Apprentice series. He has written 4 books in this series and now takes a step into a different genre with ‘She Died on a Monday’
Kevin is 46, lives in Hamilton in Scotland with his two daughters and his dog, Tiger. Kevin is a keen cook and loves the outdoors. He loves spending time with his friends and family.
Kevin began writing professionally in 2013 with the release of his first book, The Viking’s Apprentice. After his huge success in middle grade fiction he has moved into a more adult genre and looks forward to writing many more stories in the years to come.
https://twitter.com/bannon1975
https://www.instagram.com/kevinmcleodauthor/
https://www.amazon.com/Kevin-McLeod/e/B00C8QN416
https://www.goodreads.com/author/show/7031977.Kevin_McLeod
a Rafflecopter giveaway
at November 09, 2021