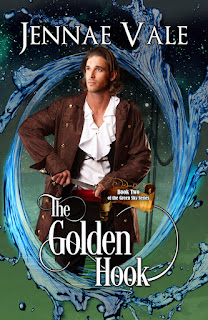 The Golden Hook
The Green Sky Series
Book Two
Jennae Vale
Genre: Time Travel Romance
Date of Publication: October 12, 2021
ASIN:B09JB82GG7
Number of pages:190
Word Count: 57,000
Cover Artist: Sheri McGathy
Tagline: Swashbuckling pirates plus time travel equals adventure and romance on the high seas.
Book Description:
What happens when a swashbuckling pirate meets a time traveling twenty-first century woman?
Edward Sutherland has always been a self-assured and confident man of the sea. He’s spent years alongside his friend and captain Jameson Mackall and until now has only ever wanted to find treasure and retire a wealthy man. He wasn’t expecting to travel through time and he certainly wasn’t expecting to meet a woman who would challenge and impress him at every turn.
Susanna Cole has lost her best friend in a boating accident. In a deep state of grief she is about to close her once thriving business when a stranger walks through her door with a letter from her friend. A letter dated 1724. Can she believe this man? Or is he playing some cruel joke?
Two strangers with one goal, to get back to the year 1724. There are plans to be made, treasure to be found and most importantly they must locate the one woman who can possibly help them in their quest. The feelings they are developing for one another will be put to the test when history, as it is written, comes into play and the life of Edward Sutherland is on the line.
Amazon

Boxes were piled high around the offices of NYC Party Planning, crowding in on the desk where Susanna Cole sat going through emails and messages from friends and business acquaintances.

This had been one of the hardest times of her life.

Life wasn’t the same without Danielle. She’d lost her best friend and business partner. They worked together and lived together. She was completely alone now and more depressed than she’d ever been in her life.

Her head popped up as there was a knock at the door. “Come in.”

The door opened and the sight in front of her was like a slap in the face. Some idiot had decided it would be a good idea to remind her of her loss by showing up in pirate costume. “Was there a costume party someone forgot to tell me about?” she snapped.

“I’m not in the mood right now. What can I do for you?” Maybe if she sounded cranky enough he’d just turn around and leave.

“I need your help,” he said, stepping closer.

“You’ve come to the wrong place. I’m no longer accepting new clients. The business is closing for the foreseeable future.” That should do it. There was nothing more to be said. If he was looking for a party planner he was going to have to go elsewhere.

“But this is the right address. You’re Susanna Cole, am I correct?” He raised his eyebrows and offered a questioning gaze.

His surly English accent was not charming her. The more she looked at him the more irritated she became. Seeing him was like rubbing salt into her wound. “Seriously, what’s with the outfit?” Whoever this guy was, he was definitely in the wrong place at the wrong time.
Reaching into his jacket pocket, the man pulled out an envelope and looked at it. “I was directed here by the people on board the ship. This is NYC Party Planning, Brooklyn, New York, isn’t it?” He straightened his coat and stood at attention.

Susanna noted his height. Easily over six feet tall, very handsome and from the way he stood it seemed he might be in the military. No matter. She’d had enough of being toyed with.  “I don’t know what cruel joke you’re playing, but it is not appreciated. My friend recently drowned on a pirate cruise to Bermuda and I’m, I’m…” She wasn’t going to cry. Not in front of this stranger. She took in a deep breath, held her head high and stood up.

“I know the whole of it. Your friend Danielle fell overboard.” His voice was soft and low, filled with understanding.

Was he purposely trying to upset her? How did he know who Danielle was? “I’m going to have to ask you to leave.”

He threw his head back in apparent exasperation before inhaling deeply and looking at her.

“Please don’t. I’m sorry. I understand you’re upset, but do let me finish what I have to say.” He paused, gazing at her with what seemed an impatient glare.

“Thank you. I’ve a letter here for you from Danielle. It will explain everything.” He held the letter out for her to take.

Susanna’s hands shook as she took it from him. She couldn’t help but feel skeptical. She’d seen Danielle go overboard and disappear beneath the waves. They’d searched for her for days, as had the Coast Guard and they found nothing.

“Did she give this to you before we went on the cruise?” She glanced down at the letter. It was Danielle’s handwriting. There was no mistaking it. Everything down to the little heart she used to dot the letter I.

“No. She gave it to me yesterday morning.” He seemed to be watching and waiting for her reaction.

“This better be good,” she said. At this point, she was ready to throw him out the door and lock it behind him. If that didn’t work, she’d call the police, but her curiosity was piqued. She opened the letter and read. 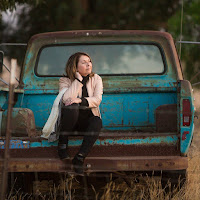 Jennae Vale is a best selling author of romance with a touch of magic.  As a history buff from an early age, Jennae often found herself day-dreaming in history class and wondering what it would be like to live in the places and time periods she was learning about.  Writing time travel romance has given her an opportunity to take those daydreams and turn them into stories to share with readers everywhere.
Originally from the Boston area, Jennae now lives in the San Francisco Bay area, where some of her characters also reside.  When Jennae isn’t writing, she enjoys spending time with her family and her pets, and daydreaming, of course.
Website: https://www.jennaevaleauthor.com
Newsletter: https://www.subscribepage.com/w4j6s3
Facebook: https://www.facebook.com/jennaevaleauthor
Instagram: https://www.instagram.com/jennaevale
Bookbub: https://www.bookbub.com/authors/jennae-vale
Twitter: https://www.twitter.com/jennaevale 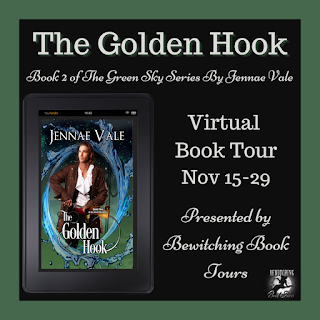 a Rafflecopter giveaway
at November 15, 2021