Thicker Than Water Tour and Giveaway 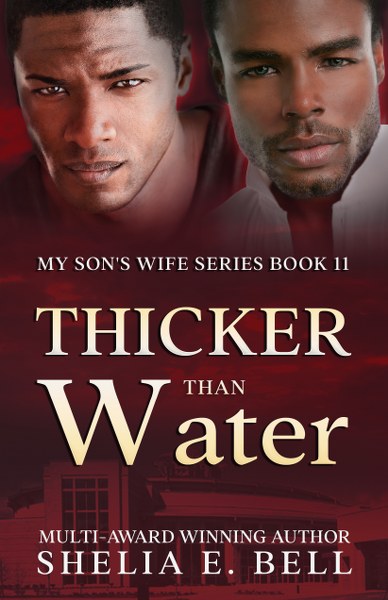 "Thicker Than Water" is book #11 in the dynamic, page flipping continuation of the "My Son's Wife" series. The church drama surrounding the Grahams and the McCoys continues to thicken. Khalil and Xavier are dealing with the turmoil surrounding their individual life choices. Khalil, a newly married pastor moves farther away from his bride when he learns some unsettling news about his First Lady. Xavier is torn between two lovers; well torn between his lover Ian and his mentally ill wife, Pepper. Pepper is fighting to get on the mend so she can reclaim her family. But this can be harder than she thinks.

Pastor Hezekiah McCoy has plenty of new tricks up his sleeve and he uses Minister of Music, Sista Rianna Jamison, to help him settle scores. Will his sneaky tactics work for him or will he start reaping some of the mess he's sown along the way. Can his brother the 'unlucky in love' Pastor Stiles Graham be of help or does he need help to find a love of his own?

Book 11 is filled with more revealing secrets and lies of these two families. Continue the saga and discover what really is thicker than water.

"Sometimes things that hurt you most, teach you the greatest lesson in life.” Buddha

The four-hour flight to Montego Bay was traveled mostly in silence. Thank God for first class travel and a relatively short flight. This worked out in Eliana’s favor because it made the trip less awkward. She spent most of the flight feigning sleep or looking out the window. The glass of red wine Khalil urged her to have helped to further relax her.

Upon arrival to their honeymoon suite, Khalil continued his litany of apologies. He may not have been head over heels in love with Eliana, but he cared about her. He would never intentionally hurt her—and certainly not by doing something like what happened today. This was supposed to have been the happiest day of Eliana’s life. But thanks to Hezekiah McCoy, it had been ruined. No one would make Khalil believe otherwise.

“I don’t know what else to say,” Khalil said, pacing the floor of the exquisite king oceanfront room.

Eliana sat in the sitting area while Khalil continued pleading.

“I do accept it,” Eliana answered slowly, rising from where she was seated and going over to the king balcony. “I know it wasn’t your fault. You would never do something like that. It’s just that it hurt so bad, Khalil. I feel terrible.”

Khalil walked up and stood behind her. Wrapping his arms around her waist he nuzzled her neck. Between each word, he planted butterfly kisses on her shoulders, neck, and the side of her face. “I’m so sorry,” he whispered. “I’ll make it up to you. I promise.’

No more words were exchanged. Eliana was consumed by the touch of her husband. She didn’t know whether to be furious at him or feel sorry that he had been played by more than likely, his father. She turned toward him, putting her arms around his neck while his hands explored her.

“I want you, First Lady McCoy,” he whispered, his breath hot against her ear, while taking her hand and guiding it to him

Eliana responded with a light gasp, as every curve of her body seemed to mesh with his. Forgetting those things that were behind, Eliana surrendered to his hands caressing her with unbridled passion.

The pounding oceanfront waves kissed the sides of their balcony with the same intensity and hunger that pounded in their bodies for one another.

Hours later, the sensual sounds of ocean waves stirred the sleepy newlyweds. Khalil lightly stretched and then spooned with his bride, gingerly kissing the back and sides of her neck.

Eliana pressed her buttocks against his front and wiggled lightly.

Slowly turning toward him, she looked at him and smiled. “I like the sound of that.” She kissed him lightly.

After making love and taking a shower and making love again, they left their room and went downstairs to enjoy breakfast. Sitting on the balcony of the restaurant, they watched the waves and gloried in the bluest of skies while dining on fresh Jamaican fruit, made to order omelets, Jamaican Blue coffee, and custom-blended fruit smoothies.

“This food is delicious. Everything is first-class,” she complimented Khalil.

“It’s all for you. I want to make you happy, Eliana. I want us to enjoy life, our life. God is blessing me and showing favor on me. I’m grateful to Him and I’m grateful to you.”

“Grateful to me?” Eliana pressed her hand against her chest.

“Yes, you’re my helpmeet, my rib. The one God sent my way. And I want to tell you again, assure you, that I had nothing to do with the fiasco that happened at our wedding.”

“And I told you, I know that, Khalil. Now I don’t want to talk about it anymore. What’s important is not what your father tried to do, or whoever it was, what’s important is that you and I are husband and wife. This marriage is ordained by God. I believe that with all of my heart and soul.”

She leaned across the table and slightly lifted her buttocks out of her seat so she could reach his waiting lips.

“So let’s promise each other to let it go. I want to cherish this moment, and every moment, with you. I don’t want any unnecessary distractions.”

“You got it, babe. I want the same thing. I believe God brought us together. We can be the next Joel and Victoria Osteen,” Khalil said, smiling and raising his cup of coffee to his mouth.

“I’ll toast and agree to that.” Eliana raised her smoothie glass to click with his cup.

The two-week honeymoon was perfect in every way for Eliana. She was living a life she never imagined could happen. She told herself for the rest of her life she was going to live a life pleasing to God and her husband. On top of that, she vowed to be the best First Lady ever to grace the doors of Holy Rock Ministries.

​Shelia is passionate about helping others and encourages and promotes people to ‘live their dreams now.’ In 2012, she founded a non profit organization "Black Writers And Book Clubs (BWABC) Literacy Association" with a mission to promote literacy one community at a time. Shelia is also a well-respected freelance book editor.

​A much sought after inspirational speaker, Shelia travels near and far sharing her inspirational messages of how to overcome the adversities of life. Having had polio since the age of two, she accepts no excuses and is determined not to let her physical imperfections keep her from her life’s purposes.