Title: All the Wrong Reasons

The day after telekinetic supervillain (and billionaire philanthropist), Stetson Nadenheimer dies, he wakes up on the autopsy table and falls in lust with the man hired to cut his cold, dead corpse open. The problem is that the forensic pathologist is Doctor Julian Dandridge, the part-time superhero, Scatter. It’s probably a bad idea for a supervillain to get into bed with a superhero. Probably.

Not that it stops him, but trying to start a relationship with a reluctant hero without getting caught turns out to be easier said than done. Between midnight meetings over games of checkers and kinky secrets, Stetson and Julian begin a tremulous romance. Unfortunately for them, there’s an actual villain watching from the shadows, waiting for Stetson to stumble.

All the Wrong Reasons
Sebastian Hansen © 2021
All Rights Reserved

The last thing I remember seeing before I died was the garish gold and orange spandex-clad fist of Major Bigstuff flying at my face at something like a million miles an hour. I lost my telekinetic grip on the wall I was holding. The debris came down on my head, which the masonry squished like a rotten melon. Brains all over the place. Bones shattered. Totally dead.

Not my finest hour.

A day later, I woke up on the medical examiner’s slab. Nobody knows why this happens. It’s a super-thing. Superheroes come back from the dead all the time. It’s practically a requirement for the job. Like when you go to get your physical at the Hall of Good Guys Forever and they stab you in the heart to make sure you’ve got what it takes to come back. I’m not entirely sure this is true, but you hear rumors.

What’s odd about me waking up is that I wasn’t a superhero. I was kind of the opposite. The anti-superhero.

My name is Stetson Nadenheimer (it’s not my fault), and before my timely death, I was a supervillain. They call me Jester. Nice to meet you.

It’s not that supervillains don’t come back from the dead. We do, but it’s usually the big-time ones. The “build a death ray and hold the world to ransom for all the money” ones. I’m not even Major Bigstuff’s main rival. He just happened to be flying past the bank I was robbing on his way home from Denny’s.

That’s what I did, by the way—rob banks. No building death rays, no kidnapping or killing people. I’d never even held anyone hostage. My Fortress of Evil is more like a Penthouse Belonging to That Mildly Irritating Villain.

But I liked robbing banks. Since most super-people are what you’d call physical (strength, size, agility, speed—you know, that kind), they don’t know what to do when someone’s power is mental. Mental powers aren’t common—and they’re not popular. Telepathy isn’t as flashy as super strength and doesn’t play well on camera. Hence, nobody’s figured out anti-telekinetic security.

Besides, I liked to flirt with the tellers. They had no idea how to handle a tall, handsome man in a sleek (cheap) black tux and white masquerade mask. I’ve got some killer green eyes too. Alas, while my black hair is long enough for a ponytail (tellers love ponytails), I kept it bound up and hidden in a hat. I’ve never wanted to take over the world, but I’m damned charming. It drives superheroes up the wall.

Anyway, back to the ME’s slab. Right. So. After knowing for a fact that my brains are all over the floor of the First United Citizens Bank on Twenty-second Street, I open my eyes. What’s the worst thing you’ve ever woken up to? In my case, it was a whirring bone saw in the general vicinity of my head.

I screamed. Well, wouldn’t you?

The bone saw immediately stopped, and I quickly became aware of someone laughing. A glance to my left confirmed that I wasn’t alone. A young man in green scrubs with tousled blond hair was turned away, covering his mouth to hide his grin.

“Works every time,” he said and set the saw down on a table just out of my reach. Then he turned to look at me, and I stopped breathing again.

In addition to the adorable hair, the man was indeed young with deep-blue eyes, dimples, and the prettiest smile I’d ever seen.

The smile faded quickly. “Welcome back.” He narrowed his eyes and watched me carefully.

My mouth opened to say something, but my brain hadn’t caught up. It was still trying to imagine what the man would look like in my bed. I’m an uncomplicated person like that. It might not have been love at first sight, but lust? Certainly. The problem currently facing me was this: I was obviously in a morgue of some kind, half-naked, drenched in my own blood, and sitting on a frigidly cold metal table. The place smelled of chemicals—formalin (I found out later) and bleach.

Forget flirting. This man had seen me dead, which is so much worse than naked.

Eventually, I managed a strangled, “Hello.”

The corner of his mouth quirked, and the smile came back slightly. He nodded and walked away from me toward the far wall, where he dug a clear bottle of water out of a cooler. He held it up for my inspection. “Thirsty?”

I nodded. My voice was still on the fritz, and he thought it was because my throat was dry instead of…oh…any other reason. I was thankful for it. Anyway, my mouth was parched. I took the bottle gratefully and drank half in one go before finding my voice again.

“Do you often wake people up in the morgue with a bone saw?”

He smiled. I wanted to melt. God. I can’t describe that smile and do it justice. Accept for a moment that it was stunning, will you? If it helps, compare it to rainbows on sunny spring mornings. Like the sun rising at dawn. The light of his smile forgave all sins, watered all crops, and brokered world peace.

The hyperbole is necessary. Everything that happened after that night started with his smile wrapping me up and turning my world on its head.

He pursed his lips and rolled his eyes thoughtfully. “Mm-hm. They don’t like it either—Mistress Tidal broke one on me, but there’s something about the sound. It tends to bring people around quickly.”

“The alternative is getting our heads cut into.”

He laughed. Please insert a description of silvery bells and songbirds here. He had a pleasant voice. “I wasn’t going to cut you open. You were already breathing.”

“I…was?” I glanced around, certain I knew where I was now. I looked down at my blood-stained hand. “Tell me, were you able to get fingerprints off my corpse? I’ve never been arrested before, so I doubt they’d do you any good.”

I narrowed my eyes. “Ah. And now we’re just waiting for reinforcements to arrive, aren’t we?”

“Are we?” He smiled again, and my reply stuck in my throat. “It’s nearly ten o’clock on a Thursday night. Nobody’s around.”

“Ah…and you’re alone here with a formerly dead supervillain because you’re, what? Confident in your medical plan?” I asked with a snort.

He laughed again. “I don’t think you’re going to hurt me. I’m pretty durable. My name is Dr. Julian Dandridge. I’m a part-time superhero. They call me Scatter.”

Ah, Scatter. I’d heard of him, but never run up against him. He belonged to the Guild, which was Kinsley City’s very own organization of superheroes. A sort of Hall of Self-Righteousness. Major Bigstuff ran the show over there.

Well, that put a wrench in my dream of having him tie me to my bed.

I frowned. The revelation that Dr. Julian was a lost cause stung more than it should have, considering we’d just met. Still, he was in the Guild, and that wasn’t good for me by any means.

The Guild didn’t typically bother about me. I was small-time and didn’t offer much in the way of a challenge. When I did run into one of their members, I tended to extract myself from the situation as quickly as possible. I can fly—and over my months-long bank robbing spree, I’d gotten good at evading the Guild’s fliers.

I glanced around, getting my bearings. A few pencils on the desk behind Julian rolled on my command, and I breathed a little easier. My telekinesis was up and ready to go.

I smiled. “You know what they call me, I’m assuming.”

I held up a hand to forestall him and started talking. It was important to prattle on so his attention focused on me and my mouth. That way, he wouldn’t notice me telekinetically prying the window out of its frame until it was too late.

“There’re a couple ways this could go. The first is dull and causes more of a mess than its worth. You call your Guild. They show up, we have a spirited scrap, and maybe I end up dead again. If not, and you manage to throw me in SuperMax, I call my astronomically overpriced lawyer and make bail in under an hour. Then we spend weeks wading through red tape, and in the end, I get a slap on the wrist, some community service, and maybe a fine. I’m not the kind of supervillain who makes headlines, Scatter, and you lot have bigger things to worry about than someone like me. Death rays and such.”

He crossed his arms.

“Of course, there’s option number two.” Grinning, I simultaneously lifted myself off the table and out of Julian’s reach and crooked my finger at the window, popping it out of its frame and setting it gently aside. “Which involves me escaping. You can’t fly, can you?”

“If I could, I’d have you down already.” He shrugged. Then he did something I did not expect.

I paused near the ceiling. “You’re letting me go?” I asked, incredulously.

“Letting you go? Oh no. No. What kind of superhero would I be if I let a villain escape?”

“A very bad one.” I pressed my hands against the ceiling and stared down at him in disbelief.

He frowned. “Do you want me to stop you?” The tone of his voice implied that he could. I believed him.

He looked away, thinking, arms crossed, then glanced back at me. “Then do me a favor and knock over some tables on your way out.”

“So it looks like we got into the aforementioned tussle?” I asked.

He waved me away. “Get out of here. If I see you near a bank in the future, you can be sure I won’t be so nice next time.”

I stared at him for a few more seconds, but his expression suggested that his patience was wearing thin and the invitation to escape wouldn’t last indefinitely.

So, stunned and unsure if what had happened was real, I flew out of the window. But I made sure to knock over two sets of shelves and a table on my way out. 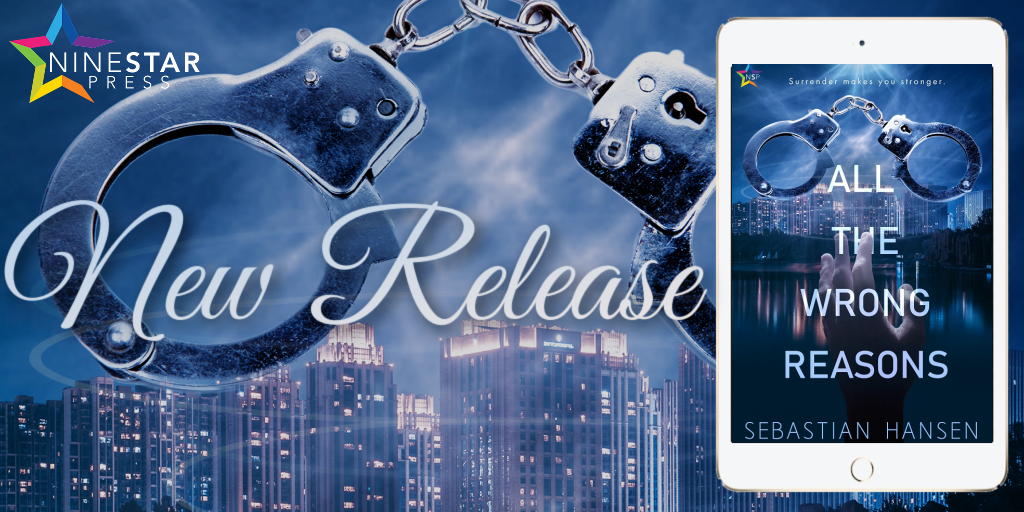 Sebastian Hansen (she/her) is a non-binary mess of a person. She lives in the Midwest with her husband and herd of opinionated cats, where she spends most of her time playing video games, reading comic books, and writing about superheroes. She likes strawberries and is easily frightened by the Internet.

One lucky winner will receive a $50.00 NineStar Press Gift Code! a Rafflecopter giveaway