Sophie’s coach was fired over the summer but not before he took several parting shots at Sophie’s character and dedication to her sport and her team. Her coach’s firing, her own injury, and her team’s whimpering exit from the playoffs weren’t the ideal way to end a season, but Sophie’s looking forward to a fresh start.

If Sophie is on the ice, everything makes sense. She can navigate a new coach, she can handle a strained relationship with Elsa, and she can breathe hope back into her franchise.

An unprecedented hot start to the season sees Sophie breaking NAHL records. She has her sights set on Bobby Brindle’s point streak record, the one she fell short of breaking in her rookie season. With personal success comes team success, and Concord has a resurgence on the back of Sophie’s accomplishments.

And then she’s injured. She has to spend the rest of the season on the sidelines, and it forces her to confront a question she has never considered before. Who is Sophie Fournier when she isn’t playing hockey?

End of an era?

Sophie Fournier is no stranger to the heralding of the end of her hockey career. People have tried to tear her down since she first put on skates, but none of them have succeeded. Even though it was Coach Butler who was fired and tossed out of Concord, it’s her career everyone claims is over.

Oh, the articles mention the Maple Cup she won, but they refer to it as if it happened two decades ago. As if it wasn’t just a few seasons ago and a historic moment for the sport. It was the first Maple Cup in Concord’s history, and she captained her team to victory and became the first woman to lift hockey’s greatest trophy.

None of the articles mention the International Hockey Tournament win from last February. There, she captained Team Canada to a win on the international stage. Does everyone believe her talent evaporated between then and now?

She was injured in the tournament, and she never fully healed, because her team needed her and her coach demanded her presence. With the season over, she will heal, and she’ll return next season better than she’s ever been.

End of an era.

When there are competing voices in the locker room, no one wins.

I’m looking forward to the opportunity to coach a team with the toughness and endurance to succeed at the end of a long season.

Sophie reads every article Butler is quoted in, and she watches every clip from his exit interviews. She swears at her computer and shakes her fist at the TV and excises the worst of her temper before she sits for the interviews Mary Beth, Concord’s PR manager, arranges for her to do in response.

It’s important for the coach and the captain to be on the same page.

No, shit. Sophie was on Butler’s page. For much longer than she should have been. She knows a divided team doesn’t make it far, and she knows how stubborn Butler is. There was no middle to meet in because he wouldn’t budge. By being on his page, she lost Elsa.

She’s still Sophie’s best friend, and Sophie will repair their relationship this season. With a fresh season ahead of them, Elsa will move back. With a new coach behind the bench, they’ll be reunited on the top line. The only reason Sophie couldn’t hold the team together at the end of last season was because her injury in the IHT kept her off the ice.

It was Butler’s fault she was hurt. He was behind Team USA’s bench at the IHT, and he gave his heavy hitters the green light to take runs at her. It was Anthony Sinclair who took her out, but it was done with Butler’s blessing. She still beat Team USA, and Butler didn’t forgive her for it, even once they were back in Concord with the same condor stitched onto all their gear.

With Sophie on injured reserve, he set about breaking the team next. He killed their confidence, insulted their hockey IQ, and took a group of highly motivated athletes and made them dread coming to the rink every day. She knows the start of this upcoming season will be spent undoing the damage he caused. She doesn’t know how long it will take or if there will be any long-standing consequences.

She wishes time would speed up and it was August already. She doesn’t want a summer to linger over everything that went wrong. She wants to dig in and fix it.

Instead, she sits for interviews, and smiles, bland and boring, as she answers stupid questions with even stupider, scripted answers. This isn’t what she’s meant for. She’s meant to be on the ice, with skates on her feet and a stick in her hands.

She can’t do either of those things, so she does the next best one.

She goes to Wisconsin.

“I didn’t think you’d show.” Lexie picks Sophie up from the airport. Even with the obnoxiously large sunglasses which cover half her face, Lexie manages to project derision.

Alexis Engelking is the American forward who went fourth overall at her draft. It’s easy to remember; fourth woman drafted fourth overall. She even made it her number, but she did it out of spite, not pride. She’s a woman who runs on spite, always dialed up to eleven, the perfect foil to Sophie’s bland Canadian personality.

Sophie doesn’t hate her the way the media wishes she would, but she doesn’t particularly like her either. Lexie’s made it her mission to not be Sophie, which means constant attacks from someone Sophie hoped to be an ally.

Still, Lexie extended an offer to train together this summer. Sophie knows there will be plenty of competition. And she could use a little spite in her summer.

“I told you I would,” Sophie answers. She has a pair of sunglasses of her own and a Boston Red Sox cap she wears with the brim tipped low. Lexie promised her discreet summer training, a break from the media vultures who want to pick at the mess Butler left in his wake.

Sophie trusts they won’t be bothered here, if only because Lexie has her own reasons for being left alone this summer. Indianapolis, Lexie’s NAHL team, made it all the way to the Maple Cup Finals. It all came down to Game Seven. It took triple overtime, but the Boston Barons were victorious over the Indianapolis Renegades.

Chad Kensington, one of Lexie’s teammates, picked up the nickname Mr. OT, because he scored three OT series-winners throughout the playoffs. He closed out each round right up until the finals. He couldn’t get it done when it mattered, and Indianapolis ended their season without the Maple Cup, the same as every other team in the North American Hockey League, except for Boston.

Lexie isn’t the captain, but she and Kensington share the responsibility for being the face of the franchise. The media, happy to build up the duo during the season and the playoffs, is even happier to tear into them with the loss.

Sophie isn’t sure she has another hill left in her. Her quads are tight, her calves burn, and her shirt is soaked through with sweat. Now is as good a time to stop as any.

Lexie’s hair sticks up in every direction, the short strands wet from sweat and the water Lexie splashed on her face three hills ago. Her face is red with exertion. She wipes her face on her equally sweaty arm and casts a challenging look in Sophie’s direction. “I bet I beat you on this next one.” 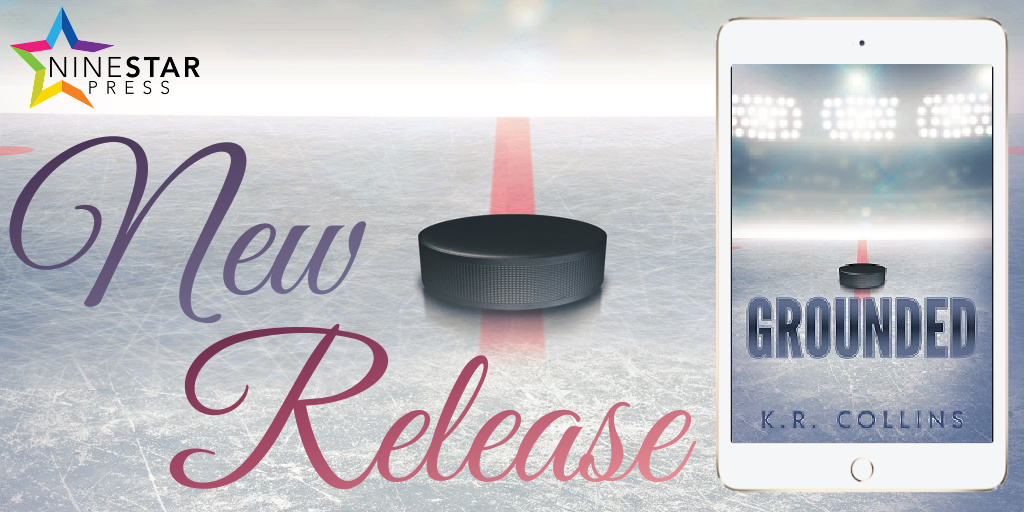 K.R. Collins went to college in Pennsylvania where she learned to write and fell in love with hockey. When she isn’t working or writing, she watches hockey games and claims it’s for research. Find K.R. on Twitter.

One lucky winner will receive a $50.00 NineStar Press Gift Card!