Silent Knight: Paul Stanton thought he had it all -- until his lover dumped him for another man, forcing Paul to rethink his life. But when a trip home for the holidays goes predictably wrong, Paul ends up stranded in the woods. There's more to Andy Reynolds than meets the eye. But is a chance encounter enough to bind two men who have nothing in common except their sex?

Andy moved through the woods in a slow stalk. Nothing beat hunting in the snow. Most Keystone State hunters called it quits by late December, but Andy was a hardheaded optimist. Besides, he enjoyed the solitude, and dealing with winter's stark elements provided an extra challenge. There were other pluses as well. Even a novice hunter could follow the deer tracks, and the light wind dispersed Andy's scent and covered any sounds he made.

But the wind picked up, blowing the snow sideways. Deer tended to lay low during high winds. It looked like this hunt would end with no game. Good thing these hunting trips weren't all about the kill. Andy hunted for food, but mostly to get out, and be a part of nature. The experience took him back to a happy time when his parents were still alive. He and his dad spent a lot of time in the woods. No TV, no cars, no other people, just the two of them hanging out and having a good time. Half the time they came home empty handed, but it didn't matter. Andy's mom would welcome them home with a good, hot meal.

God, he missed them. At least they'd died together. A car accident. Never knew what hit them, according to the coroner. Andy had come home to bury them a year ago and never left.

Snow on an overhanging branch dropped white bombs on Andy's head. He brushed it off, and looked around. No animal life disturbed the spectacular view. No sound, except for the howling wind. He felt insignificant in these surroundings, yet more alive than he did in the city.

Andy packed up his gear and started backtracking toward his ATV. The wind blasted him and drove him off his path a few times, but finally the gusts eased and the ATV appeared in his sights. It occurred to him he might have to leave it, but old reliable started right up. Andy nosed it around and got back on the road, recognizable because it was the only stretch clear of trees. Mishaps were more common in the winter, but the white stuff didn't intimidate Andy. He knew these backwoods like the --

Andy swerved to the left to avoid the man in his path. The ATV slammed into a car, and Andy catapulted feet over head. One second he was behind the wheel, the next he was flying through the air. Andy landed face down in a snow covered hill of pinecones that cushioned his touchdown. Everything happened so fast. For a few scary seconds he couldn't breathe, then someone grabbed him and rolled him over.

Before Andy could react, a hand gripped his chin and tilted his head backward. An ear covered his mouth.

"What the fuck!" Andy cried out. He opened his eyes just as the other man jerked his head back. When Andy's blurry vision cleared, he saw a pair of worried eyes staring down at him. Snowflakes drifted around the stranger's head, and stuck to his long dark lashes. The sound of the wind faded into the background, and the silent snowy woods provided a surreal backdrop behind the green-eyed stranger. Andy sucked in a frosty breath. In the midst of the chilling temperatures, heat sparked in his groin.

The voice brought Andy back to reality. "No thanks to you."

Andy attempted to get up, but Green-eyes gripped his arms and held him down. "Don't move, you might have broken something."

"Don't even try playing white knight. This is your fault, asshole."

Green-eyes backed off and held his hands up in surrender.

Andy struggled to a sitting position and glared at the other man. "I'm fucking freezing, and you want me to lay here."

Andy stared at the man's stuttering lips. They were blue. The color didn't go well with his eyes. Oh hell! His white knight was in worse shape than he was. "Gimme a hand," Andy barked. "We need to get outta this storm before we both freeze." 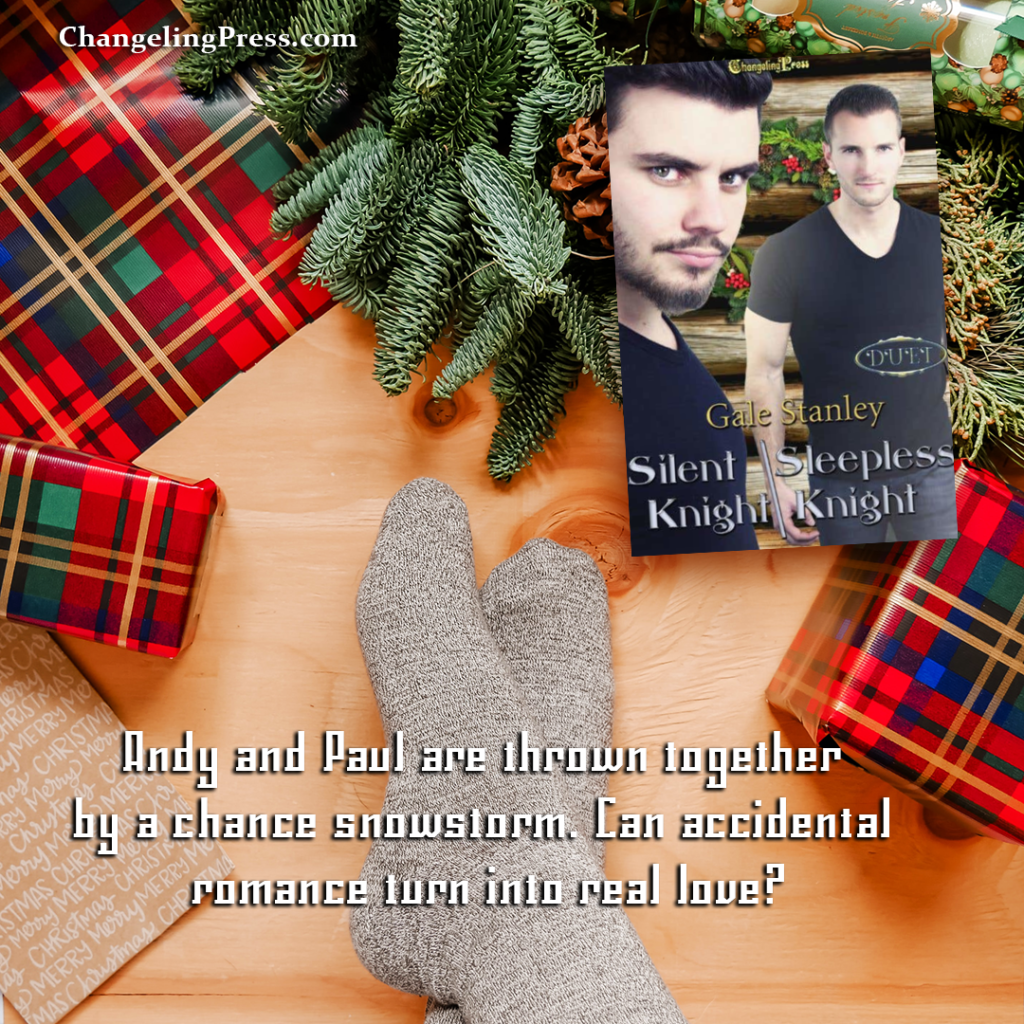 Gale Stanley grew up in Philadelphia PA. She was the kid who always had her nose in a book, her head in the clouds, and her hands on a pad and pencil. Some things never change.