Warm Up With A Savage! Savage Bloodline December Blog Tour 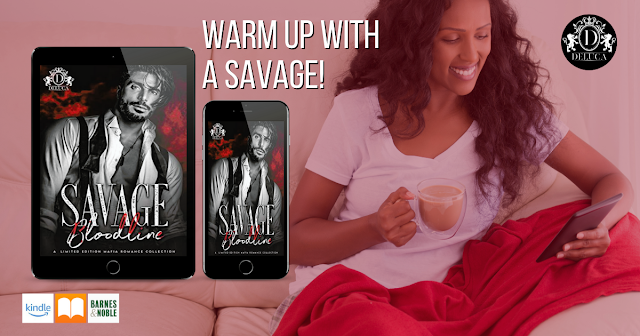 Savage Bloodline
The men of the DeLuca family are proof that the bigger the alpha, the harder they fall… in love. 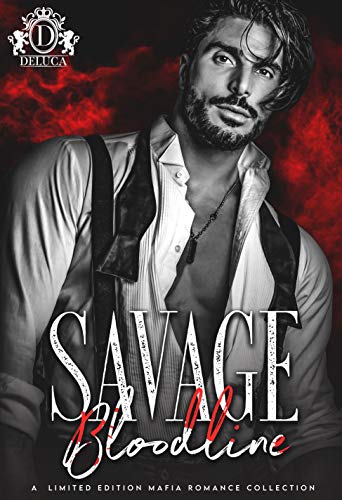 It's the time of year to get yourself a savage and stay warm. Grab a savage, a blanket, and some hot chocolate. You deserve the hottest, sweatiest stories you can imagine as winter sets in. You'll shed your flannel pajamas for lace and leather when you meet the DeLucas.

Add it to your TBR list on Goodreads: https://www.goodreads.com/book/show/57656059-savage-bloodline

Darkness lurks behind their gazes. There’s something sinister about their smiles. Their name incites fear in their enemies. Their touch arouses passion in the women they love. They are the DeLucas. In the streets and in the sheets, there’s one word that describes them best. SAVAGE.

The men of the DeLuca family are proof that the bigger the alpha, the harder they fall… in love.

Download this exclusive anthology featuring 20+ BRAND NEW mafia romances to find out which DeLuca you will fall in love with. But first, you must ask yourself one question: Are you ready to give your heart and body to a savage?

Immerse yourself in this dangerously seductive collection that includes:

Someone was going to die tonight.

Someone’s life was going to end before the clock struck twelve. Midnight. Their death would be painful, brutal. No mercy would be shown to them. Anyone who tried to defend them, anyone who got in the way, they too would die. That was the promise Enzo DeLuca had made to his grandfather.

To this man, he owed his life. For this man, tonight, he was going to take a life. Rain fell in sheets on that cold and dreary January day in Bari, Italy. It was as if even mother nature was mourning the loss of Ermanno Deluca. Unlike most of those around him, Enzo DeLuca refused to stand under the shield of an umbrella.

He wanted to feel the cold rain against his skin. He wanted it to drip down his face like tears. Tears he refused to shed. There would be no crying for him. Not yet. Not until he’d kept his promise to his grandfather. Not until he’d put a bullet in the heart of the bastard responsible for the pain the DeLuca family was feeling today.

Perhaps this rain was a parting gift from his grandfather, who knew Enzo would not feel worthy of crying over his death, not until the person responsible was dead too. Enzo refused to allow his grandfather’s body to grow cold in the earth while his killer lived life to the fullest, making money, eating, sleeping, fucking, living as if he hadn’t caused the death of a Don. As if he hadn’t taken the patriarch of the DeLuca family away from them.

He refused to allow the DeLuca name to be made weak by the actions of a coward. Though he’d yet to kill the person responsible, those who knew Enzo knew that the coward was a dead man walking. A zombie. He could see, he could feel, he could hear, but he was already dead. There was already a bullet chosen for him.

A bullet blessed by his grandfather before he’d taken his final breath and left Enzo to deal with the chaos the coward had created. Yes, the coward was still moving around in the world of the living, but he was on borrowed time. And that time would expire tonight. It had taken Enzo a few days, but he now knew who the killer was and where to find him.

A life for a life. That was the code they lived by. The bastard would pay for his sins with his life. Not only because of the promise Enzo had made his grandfather but also to prove to their enemies that the DeLuca family was still a family of savages. Under his grandfather’s rule, they’d been nicknamed savage gentleman by some.

They kept to themselves and handled their business as gentlemen, Men of Honor. But when fucked with, they revealed just how brutal their bloodline was, how ruthless their organization was. He knew other families were watching and waiting to see if they’d live up to that title. They were watching to see if they would fall apart or rise up now that Ermanno DeLuca was no longer around.

It wasn’t only their enemies who were watching them. Members of the family were also paying close attention. Today, family members from all around the world were attending the funeral of their Don. Yet, half of them hadn’t shown their faces in Italy in years. They’d moved away and only returned home for funerals and weddings.

Some didn’t even come for that. Yet, they’d come for the funeral of Don DeLuca. Not out of respect, love, or loyalty. They came to see if there would be drama and to see if the passing of the title would cause chaos amongst the organization. Already there was speculation of who the new Don would be.

Whispers of who some wanted it to be had already reached Enzo’s ears. Whispering and talking behind backs were actions of weak men. Enzo liked to handle things face to face. And those who were whispering behind his back would soon have to face him. There was another group of people who’d come to the funeral. His grandfather always referred to people like them as vultures.

They were the ones who’d shown up so they could sidle up to the new Leader and try to get on his good side early so they could make requests of him later. Then there were those who were happy the old Don was dead. They were there to verify it for themselves and to silently gloat that they’d outlived Ermanno DeLuca.

If Enzo could, he’d put a bullet in all those who felt that way. Then he’d bury them underneath his grandfather’s grave so that he could rest in peace the same way he’d lived, with his enemies beneath his feet. As Enzo stared around him, he noted that there was one last group of people present. The loyal.

They were the ones who’d truly come to pay their respects to their fallen Leader. Ermanno DeLuca had been hated by many but loved by more. He’d been a fair Don, who’d steered the organization away from wars and into alliances that benefited them. Some had been happy with the changes he’d made. Others had wanted to go back to the old ways.

They wanted to go back to the old days. The days when organizations fought against organizations regularly to prove who was the more ruthless, to prove who should be the king of the streets. Don DeLuca had won that war and claimed that title. He’d found no need to fight continuously.

However, there were some who’d enjoyed the wars, the chaos, the death, and destruction. It was true. The wars had led to the respect their organization and family enjoyed today. It led to them becoming the most feared family in Italy. The name, DeLuca, was feared and respected worldwide. Yet, the wars hadn’t only brought them glory.

It had brought death and destruction to so many of their people. A lot of blood and tears had been shed for them to hold the position they held today. The Don had taught Enzo to respect those who’d died so that he could stand where he stood. He’d told Enzo not to let those blood and tears be shed in vain.

Some of the family didn’t feel the same way. The problem was determining the motives of those around him. It was hard to tell who was for you and who was against you at a time like this. How was he to know who was crying and who wasn’t? Tears or rain? That was the guessing game he was playing. And he was losing.

The voice of his right-hand man, Stefano Masiello, sounded over the comm-link in his ear. “Enzo, after the funeral, you must go to the reception. You have to show your face there. We all do. As soon as the funeral is over, we can head there.”

Enzo was impatient. He didn’t give a damn about a reception. If he could, he’d skip the entire event. It would only be a bunch of motherfuckers, smiling in his face, telling him stories of the old days and things Don DeLuca had done. He’d heard those stories. He’d seen those smiles. Why the fuck did he need to see and hear them again?

His gaze darted to the other side of the burial site where Stefan stood. He knew Stefan was only looking out for him. He knew he needed to attend the reception to keep up appearances. However, there were more important things he needed to do. He wouldn’t be able to rest until his fingers were coated with the blood of his enemy.

He wouldn’t be able to rest until his grandfather was avenged and the entire world knew it. But the reception was not something he could skip. Therefore, he nodded. A shadow crept overhead, and the chill of the rain ceased descending upon him. From the corner of his eye, he saw his cousin, Vito DeLuca, stepping forward, holding an umbrella.

“The rain is getting harder,” Vito told him.

Enzo nodded. Vito sighed. Both men stood there, silent once more as they listened to the preacher.

“At least you came. Some did not. They will pay the penalty.”

“Not everyone was as close to Grandfather as you and I.”

“But we’re all of his blood. And we’re all supposed to come home when we’re called.”

“You’re right. Family is family. We’re bound together by blood. When needed, we must come.”

“That’s because those are his words. I’m going to miss our monthly chats over the phone.”

“When did you last talk to him?”

“A week before he was shot. If I’d known then what I do now, I would’ve stayed on the phone with him longer.”

Like his cousin, he’d also been playing the ‘If I’d known game’. If he’d known what he knew now, he would’ve spent more time with his grandfather. He would’ve made time to travel with him.

Every time the Don mentioned taking a trip to the States, Enzo’s excuse was always that he was too busy. He’d give anything to take that trip with him now. Enzo swallowed the lump of aguish rising from within him. No tears. Not yet. It wasn’t time.

Facing Vito, he asked, “What were Grandfather’s last words to you?”

“He told me to always remain true to what I believe in. He told me that he trusted me to do what was right for the family, even if it wasn’t of popular opinion.”

“Grandfather talked about you a lot. He liked the road you’d chosen. He said we needed more men like you to keep us on the right path.”

For a while, neither of them said a word. Then Vito asked, “What were his last words to you?”

The Don’s last words to Enzo were much different from what he’d said to Vito. That was because he expected something different from Enzo. Though the weight of his Grandfather’s expectations of him was heavy, Enzo wouldn’t let him down, and he wouldn’t fold under the pressure.

He’d do exactly as he was told. His eyes were glued to the casket as it was lowered into the ground. Goodbye Grandfather. Rest in peace, Don Ermanno DeLuca. No crying. It still wasn’t time for that yet.

“Enzo,” Vito called to him. “What were Grandfather’s last words to you?”

As the casket disappeared, Enzo responded. “He told me to remind them of who we are.”