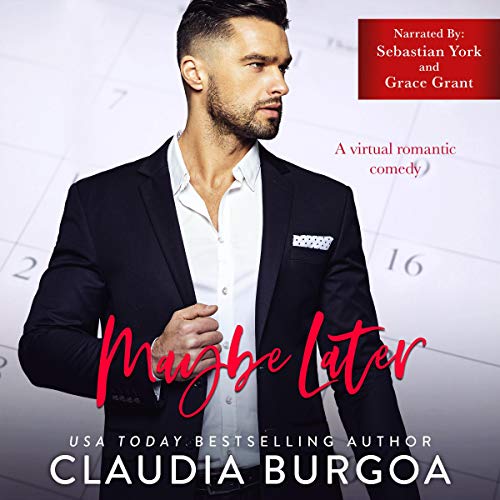 Billionaire Jackson Spearman is impatient, demanding, and private. He’s practically a recluse. When his assistant goes on maternity leave, Amy Walker, virtual assistant extraordinaire, arrives to save the day.

Amy is inquisitive and far too optimistic. She isn’t impressed with Jackson at all.

Is she even real?

They can’t stand each other. Unfortunately, they can’t seem to resist each other, either. Soon, their work relationship starts to feel like something more....

Even when Amy meets her dream man, she can’t seem to stop thinking about her annoying online boss. And the woman who’s never fallen in love before, finds herself falling for two men.

Both of them have everything she’s ever wanted. But she has to choose one.

Can Jackson convince her that he can be everything that she needs? Or will her past come back to haunt them and ruin her chance at love?

Momma Says: 5 stars⭐⭐⭐⭐⭐
Maybe Later is an absolutely charming romance. It's witty, fun, emotional, and completely engaging from start to finish. It's the story of two people who don't trust easily and both are pretending to be someone else. The truth of them lies somewhere in the middle of what they show to the world and what they give to each other under the anonymity provided by email and text messaging. From the beginning, I was sure I knew exactly where this one was going, where the relationship angst would come from, but the author took me completely by surprise and went in a different direction. It's a slow-burn romance, but the pacing doesn't feel slow at all. At the same time, nothing feels rushed or forced, and the timing is about as perfect as it gets. The characters are interesting and lovable, the banter is witty and often hilarious, and the romance is heartfelt and sexy. This may be my first read by this author, but it certainly won't be my last.
This was my review of Maybe Later when I read the ebook, and it all holds true after listening to the audio - well, except for the whole thing about being my first read by Claudia Burgoa. I've read several since then, and she remains one of my favorites. The narration is done in dual POV by Sebastian York and Grace Grant, and they are every bit as fantastic as I expected. The dual POV narration works perfectly with the emails and texts between the characters - it could've been rather confusing otherwise, especially with the fast pace of the story. In my opinion, the narration takes an already loved story to the next level.