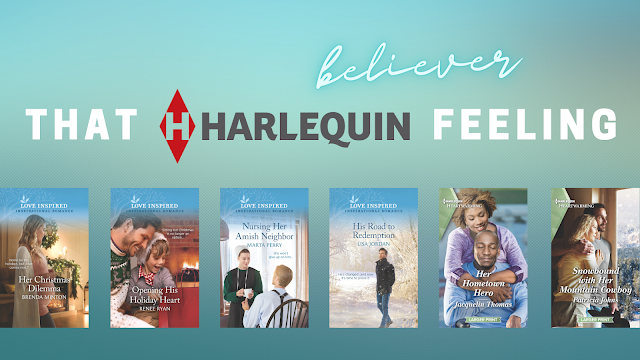 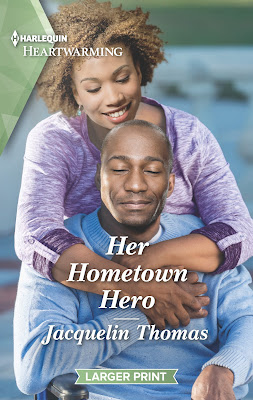 Can a wounded hero let go of the past? Wounded marine Trey Rothchild has returned to Polk Island. People call him a hero, but will he ever feel that way after losing his team? Reuniting with high school crush Gia Harris buoys his spirits. Though she’s focused on making her physical therapy clinic a success—and avoiding romance with patients—Gia can’t bear watching the former athlete sit on the sidelines of life. Could helping Trey recover include loving him fearlessly?

Momma Says: 4 stars⭐⭐⭐⭐
Her Hometown Hero is a second chance for Trey in more ways than just reuniting with Gia, and she's got her past spurring her forward. These two couldn't be better suited, and it's a clean romance full of sweetness and hope. I think that's my favorite thing about these Harlequin Heartwarming books. They focus on hope and they're truly uplifting, which is just what I need to relax and destress after a long week. This is my first experience with Jacquelin Thomas, and I thoroughly enjoyed this romance. Trey and Gia are a great couple that I found myself rooting for pretty quickly. The book is well written and easy to fall into, and I'll be looking forward to whatever Thomas does next.

Trey hadn’t felt this relaxed in months. He closed his eyes, allowing his body to become one with the water. Regaining this small sense of movement was a defining moment for him—he felt a sense of freedom he’d thought was long gone.

At every encouraging word and smile from her and Gia’s obvious faith in him, Trey’s heart turned over in response. There was no fighting it any longer. He wanted something more than friendship from her. He’d been crushing on her at first like before, but what he felt now defied words.

However, reality sank in. What could he offer Gia?

Yet…the way she looked at him motivated him to take a chance with her. After all, she was his biggest cheerleader and she often reminded him that he could continue to improve his quality of life, including having a family.

At the end of the aquatic therapy session, Gia assisted him back into his wheelchair.

He decided to take the leap. He didn’t just want to be her friend. He wanted more. He wanted Gia.

“How do you feel about mixing business with pleasure?”

She dried herself off. “I’m not sure what you mean by that.”

His eyes traveled over her face, studying her expression. “Will you have dinner with me? As in a date.”

Gia gave a slight nod. “I’d love it.” She handed him a towel. “But I can’t unless you fire me, or I quit. It’s not ethical for me to date my patients.”

Grinning, she responded, “In that case, I have a replacement in mind for you.”

He was surprised. “Were you planning to quit on me?”

Gia laughed. “No, I simply wanted to be prepared in case something happened to me, or if we decided to be more than friends.”

“We have gotten pretty close,” Trey said. “I’ve tried to keep it professional, but I really care for you.”

Her words thrilled him. Clearing his throat, he stated, “If you don’t mind coming to the

house later, I can order some food from the café. I really don’t enjoy eating alone. I never really have.”

“How about I cook something?” she suggested. “I’ll have to check your refrigerator to see what I have to work with.”

About JACQUELIN THOMAS:
Jacquelin Thomas' books have garnered several awards, including two EMMA awards, the Romance In Color Reviewers Award, Readers Choice Award, and the Atlanta Choice Award in the Religious & Spiritual category. She was nominated for a 2008 NAACP Image Award for Outstanding Fiction in the Young Adult category. Jacquelin has published in the romance, inspirational fiction and young adult genres.