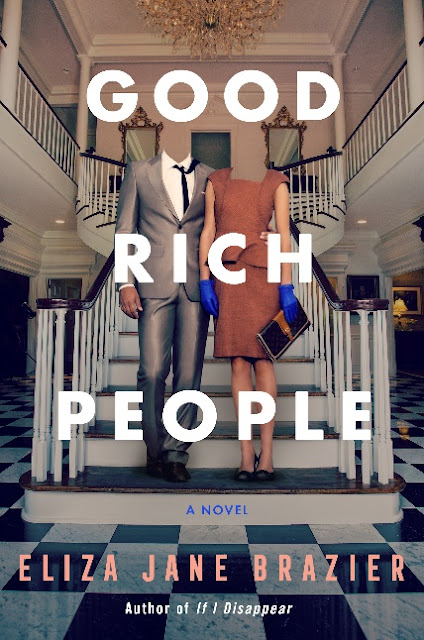 Lyla has always believed that life is a game she is destined to win, but her husband, Graham, takes the game to dangerous levels. The wealthy couple invites self-made success stories to live in their guesthouse and then conspires to ruin their lives. After all, there is nothing worse than a bootstrapper.

Demi has always felt like the odds were stacked against her. At the end of her rope, she seizes a risky opportunity to take over another person’s life and unwittingly becomes the subject of the upstairs couple’s wicked entertainment. But Demi has been struggling all her life, and she’s not about to go down without a fight.

In a twist that neither woman sees coming, the game quickly devolves into chaos and rockets toward an explosive conclusion. Because every good rich person knows: in money and in life, it’s winner take all. Even if you have to leave a few bodies behind.

Momma Says: 4 stars⭐⭐⭐⭐
Good Rich People is one of those books that you turn the last page and think 'what in the world was that?' I know I did, but I also thoroughly enjoyed it. It's dark and twisted, sometimes shocking, and it comes with those characters you love to hate. Seriously, these are some really unlikeable characters, which makes the story even more entertaining. Most of us couldn't even imagine knowing someone like Lyla and Graham, let alone being like them, and to be honest, they're probably as over the top as the storyline. Funnily enough, that's part of what makes this one so much fun to read. It's pretty out there, and there are also a couple of jumps in logic, but with everything going on, that wasn't a big drawback for me. I think this book is gonna be one of those where a lot of people are going to have to agree to disagree, and I think it very well may be split down the middle on opinions. What I know is I enjoyed the story and while it stretched the suspension of disbelief, it was just the escape from reality that I needed.

I get so bored sometimes, I think I will do anything to stop it. I decide to make Graham dinner. He blames me for what happened.

We don't have anything in the kitchen except Mo‘t-dozens and dozens of bottles that Graham's mother, Margo, keeps giving us, daring us to celebrate.

I decide to make spaghetti because it's European and I think I can manage it on my own. The housekeeper got spooked and left, so we've been ordering in. I need to hire someone before Margo does, but I like how our house looks with a little dust. It looks like people actually live here.

I go to my closet to choose an outfit for the market. Everything in my closet is shades of gray. I've always wanted a signature color. Margo's is white. Graham's is blue. He says it's a power color. All of my underwear is blue.

I select a gray cashmere top and gray cashmere bottoms. Not the same shade of gray, because I don't want to look like an insane person. I accessorize with the exact right amount of diamonds and the hot pink gator Kelly bag I won in a game with Margo.

I stop to check my reflection in the full-length mirror. Sometimes I am scared by how beautiful I am. Every inch of me is buffed and primed. My face hangs exactly right. My muscles are taut and organized. I am scared because I don't want to lose it: the shaped nails, the tip of my nose, the sapphire glow of my eyes. I am sad because I want everyone to see it, but I don't want to see them. I want them to know how lucky I am but I don't want them to have access to me. It's a real problem.

I pass through the living room on my way out. It's Monday and light is streaming through the wall of windows, onto the travertine dining table, the gold bar chairs, the carved silver accents. The house is decorated to Graham's taste because I don't have any. I acquired his taste the day we got married. It was easier that way. Marriages fail because people are different. I want to be the same. Look the same, feel the same, have the same appetites. I want to cross the stars for us.

I pass through the courtyard on my way toward the gate. The flowers stink. The fountain gurgles uselessly, like a body choking on its own blood.

Our house looks like a handful of glass tumbling down a hill. Our front facade is modern, stoic, but when you step inside, the house stretches, open-plan, back and back forever, until it reaches a wall of windows. What you can't see from inside is the structures, the plinths underneath that hold it up, allow for the illusion of those never-ending floors.

In the hills, people will build anywhere. The more perilous the precipice, the more insecure the foundation, the more they need to build something on it. It's a challenge, a victory of money over matter.

Our house is built on the edge of a cliff.

And underneath it, between those concrete plinths, is a hidden guesthouse. It was built to hold up the house above. Margo once used it to store her exotic shoe collection, but now we use it to store a person.

I exit the gate and lock the door behind me. I can see Margo's tower above, chiseled to a point. Margo's house is like a castle, with all the requisite wars and rumors of wars. Graham says one day we'll live there, when he inherits everything, but I have no doubt that Margo will live forever to spite me.

When you're rich, you can control everything. Except the richer.

Graham is afraid of losing his mother's money. Maybe even losing his mother-who knows? So we live in a glass house beneath her fortress, in a tidy alcove in the hills above Los Angeles, the ugliest and most beautiful city in the world, depending on where you're standing.

There is a little village square with a market just three blocks away but I have to drive. The streets in the hills are narrow and uneven and there are no sidewalks. Only mad people walk in LA. For my birthday, Graham gave me a gray Phantom. It's terrible to drive in the hills. I've scraped the back end four or five times and cracked the rear lights but Graham won't fix them because he thinks it's funny.

It takes me ages to get it out of the garage and even longer to navigate the narrow streets of the hills because inevitably cars appear going the other way and I have to honk until they back up. People are such assholes.

I finally make it under the stone archway that signals the village. It's designed to look like a European enclave, all stone streets and storybook architecture. It really just looks like an abandoned fairy tale.

When Graham and I first moved in, we walked to the village market together at dusk to buy a bottle of red wine. The memory itself has very little to offer-it was dark and we were holding hands-but what I remember is not the night itself, but the promise of the future contained in it, how I thought that we would do this again, perpetually: walk beneath the arches in the semidark, kiss in the stone corner of the vintage boutique, pretend we were a couple out of time. I remember saying, This is so magical. It's like we're somewhere else. It's like Disneyland!

Now I drive beneath the arches and I think, We never came again. Not once. Graham works. We order everything in. If I ask him to go for a walk, he says, Are you kidding? Rich people don't walk. Their shoes aren't designed for it.

I get to the market and find handmade pasta, but the sauces are all wrong. There is a clerk beside me filling the shelves-a teenager with a constellation of zits from his ear to his throat.

"Excuse me?" I hold out the priciest pasta sauce. "Why is this so inexpensive? Is there something wrong with it?"

The attendant looks flummoxed, like he has never been asked such a question. "Uh . . . I'd have to ask."

"Do you have anything more expensive?"

"You should make it from scratch." A familiar woman approaches from farther down the aisle. I've probably seen her in the neighborhood. I turn to face her. She has three necklaces around her neck, so I know she's crazy. One is a star, one is a circle and one is a cactus. I've seen the star necklace before, but it's a popular design.

"Me?" I can't believe she's talking to me. Her under-eye area is clogged with mascara dust. She has wrinkles but she is probably younger than me. She just doesn't have a good doctor.

"It would be more expensive if you bought all the ingredients separately." She crosses her arms. She carries a shopping basket, but it's empty.

I set the pasta sauce back on the shelf, stamp my foot, throw up my hands. "I have no idea what's in pasta sauce!" I say, like nobody does.

"I can help you"-she shifts her hip-"if you want." She purses her chapped lips. Those three necklaces glitter with menace. But Graham would be so impressed if I made my own pasta sauce. Even more impressed if I had someone make it for me.

The corner of my Kelly bag is digging into my side, so I adjust it. "Oh, would you? I would so appreciate it." She nods eagerly. I indicate my cart. "Would you mind? It's so hard to carry a bag and push a cart." I frown.

She hesitates, face closing. She doesn't know what it's like having to carry a Kelly bag everywhere. It's not like I can just put it in the cart!

She sighs and swings her plastic basket into my cart. I follow her to the produce section. She finds me the priciest tomatoes, precut garlic, red onions. It's a good thing I'm there, because one of the onions looks dirty and I make sure she swaps it out. As she shops, she explains to me how to mix everything together. Of course, I don't pay attention. I hate listening to people when they talk.

"Got it?" she asks when all the ingredients are in my cart.

"No," I say blithely. She shifts from foot to foot. "I'll never get it! We used to have a housekeeper who did all this, but we had to let her go," I lie. "She was very religious." That part is true. She suggested we were all going to hell. I privately thought hell couldn't be worse than Margo. At least in hell you don't have hope.

"I could help you," the woman says, "if you want." She adjusts her empty basket. "I'm actually looking for work."

I find myself considering it. She seems to know her stuff, and I do need to hire someone before Margo does. It looks like I would be doing the woman a favor. Her hair is knotted. Her eyes lack sleep. Her nail beds are dirty and uneven. She'd be very lucky to work for us. There are far worse places to be.

Her necklaces remind me of something, but I can't remember what.

Maybe it's someone I used to know.

Or maybe it's me.