✱✱Book Review✱✱ Save Her: A Lacey James Mystery by Chris Patchell 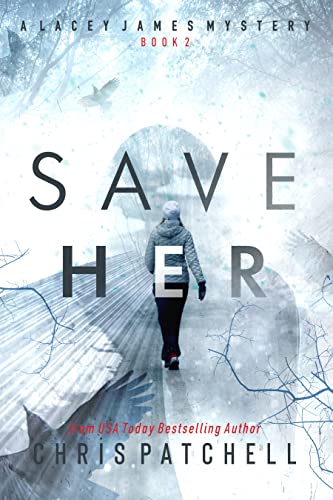 Abandoned on a remote mountain road, the storm closing in isn’t the only deadly threat she will face.
A New Year’s Eve party is the perfect time to reconnect with old friends and make resolutions none of you will keep. Still, Audrey Drummond sees it as a good way to pass the time now that she’s back in Sweet Home, Oregon. She hitches a ride with her high school ex, but their ride down memory lane takes a perilous turn, and Audrey finds herself abandoned, cold and alone on a mountain road—miles away from the party.From that moment on, her situation only gets worse.When Audrey vanishes in a winter storm, Officer Lacey James knows that left to the elements, she won’t survive long. But when the initial search yields no viable clues, the missing persons case takes a darker turn.
Time is running out, and the killer storm isn’t the only immediate threat Lacey will face in the desperate quest to save her.

Momma Says: 5 stars⭐⭐⭐⭐⭐
Save Her is a fast read with a fast pace. It's an edge-of-your-seat, intense thriller, and Chris Patchell doesn't do much in the way of dawdling even at the beginning. This book is easily read in a couple of hours, and it's a good thing because once it takes off, there's no way I was putting it down. Between Lacey's hunt for Audrey in treacherous conditions and the turmoil between her and Caleb, her husband, she doesn't have much time to do anything except push forward and react to everything going on around her. Fortunately, she's as smart as she is tough. She's maybe a bit too stubborn for her own good, but that determination and drive serve her well in this situation. So, we have the nail-biting search for Audrey - and the story does shift over to her enough that we have a pretty good grasp of her situation. Then we have the relationship between Lacey and Caleb, who are just a few wrong words spoken in anger away from splitting up. I read in the Afterword that the author didn't know until the "ninth hour" how things would end up between Lacey and Caleb, and I'll admit that I wasn't really sure if I wanted them to stay together or not until... Well, I'll leave that for you to uncover for yourself. If you're looking for a good thriller to while away an afternoon or evening, Save Her will do the trick. It is book 2 in what I understand is to be a 3 book series. Now, you don't technically have to have read the first book to follow this one, but these are some terrific characters and you'll want their whole story from the beginning. The only problem I have is waiting for the next book and worrying that 3 books won't be enough of Lacey and company.