Peter is good at being a lawyer. He also happens to be a vampire, which -- in his experience -- is far less exciting than the books make it out to be. The most romance he gets these days is watching others fall in love. But this vicarious lifestyle isn't something Peter minds or even wants to change.

Theo escaped an abusive relationship and is determined to get his college degree, even if prostitution is how he pays for it. No stranger to the supernatural, he has agreed to let vampires bite him for money, but his first client in the new city is nothing like Theo expected.

Peter has no good reason to tuck Theo into bed after that blood donation, but he does. Peter also has no reason to fantasize about Theo, and yet, Peter’s mind is soon drifting to the pretty, black-haired, jade-eyed boy he doesn’t even really know.

A chance encounter at New Elvenswood University brings Peter’s fantasies close to reality. Theo’s vampiric ex soon becomes a problem Peter will have solve. And he won’t use his skills as a lawyer to do it, either.

Sitting behind his desk at his law firm, Peter Collins stared at the spreadsheet that was currently open on his work laptop. But the columns and all the numbers made no sense. Spreadsheets never did when Peter hadn’t had some nice fresh blood in a while, even if he normally loved himself some Excel magic. Sighing theatrically for the benefit of exactly no one because he was alone in his office, Peter leaned back in his ergonomically optimized chair and glared at the damned spreadsheet. It still made no sense, and obviously, his glaring was wasted on the damn screen. With a dismissive gesture, Peter closed his laptop and got to his feet.

He had the corner office, naturally, because he had founded the law firm Collins & Partners. Most days he liked the room that had been designed with an eye to justifying what his clients were billed for an hour of his lawyery time. But right this moment, Peter couldn’t spend another second in here because the cubist paintings just seemed gaudy.

Peter swung the glass door open with a touch and hurried down the hallway, the nice scowl on his face forcing everyone to move out of his way. Peter barged into Michael’s office, and the handsome siren looked up.

“Anything you need?” Michael asked.

Oh, Peter had a list of things he conceivably needed from Michael, and that list had grown ever since Michael had started working for him. At first, Peter had entertained thoughts of a nice, tempestuous affair with the delicious-looking siren. Peter had never had siren’s blood, and he’d wondered what Michael’s blood would taste like in the throes of passion.

However, Michael had not been interested, and Peter was not one to force his own desire on others because, the bother. Then, Michael had started dating a human, the cutest little librarian in all New Elvenswood, and that had been better, because Peter got to watch those two being adorable together. He’d also gotten to watch the cutie-pie librarian go up against a Yule cat to protect Michael, and then the three of them had enjoyed a vacation with a little zombie extravaganza on the entertainment front. It had been such fun.

Now, Peter’s siren and the cute librarian were planning their wedding, and Peter, to whom the sweet little librarian had given the epithet “the Terrible,” felt he was not involved enough. Yet, Peter could not outright state the injustice, because then he would have to explain his desire to be more involved, and the bother.

But still, in the face of a properly engaged Michael doing some paperwork or other, all Peter wanted to say was that he needed to be consulted on wedding decisions.

The goddamn bother. “Just checking in. I wanted to make sure you were dealing with your current caseload. I would understand if you needed more time with Corvin right now.”

Michael smiled up at Peter. “It’s fine, actually. Corvin’s excited and he’s still processing that his best friend is dating an Elf. And a vampire.”

Peter nodded. “Those are Lord Laurette’s lovers, yes?” That sweet, bookish Corvin was friends with one of the Elven lord’s lovers was, frankly, a wonderful happenstance. Peter had high hopes of meeting them and watching <em>that</em> story unfold. If an Elf such as Laurette of the Silver Moons had claimed two lovers, that romance truly had to be epic. Peter would like nothing better than to watch that love story from the sidelines, but still close enough to where the action was happening. Michael and Corvin would always be Peter’s favorites, but an Elf, a human, and a vampire? There was just no way that was not a romance built for swooning over in secret.

Michael nodded. “Yes. Corvin can’t believe he had to be engaged to a siren and survive a horde of zombies before getting told about all that.”

“Understandable. Perhaps we should go to the library? To surprise your Corvin, of course. I should like to make sure he is fine after that drama with the garden shears in Morrowvale.”

Really, Michael had to give Peter that. It wasn’t an unreasonable request, and Peter loved seeing Michael and Corvin kiss, touch -- all that wonderful intimacy. 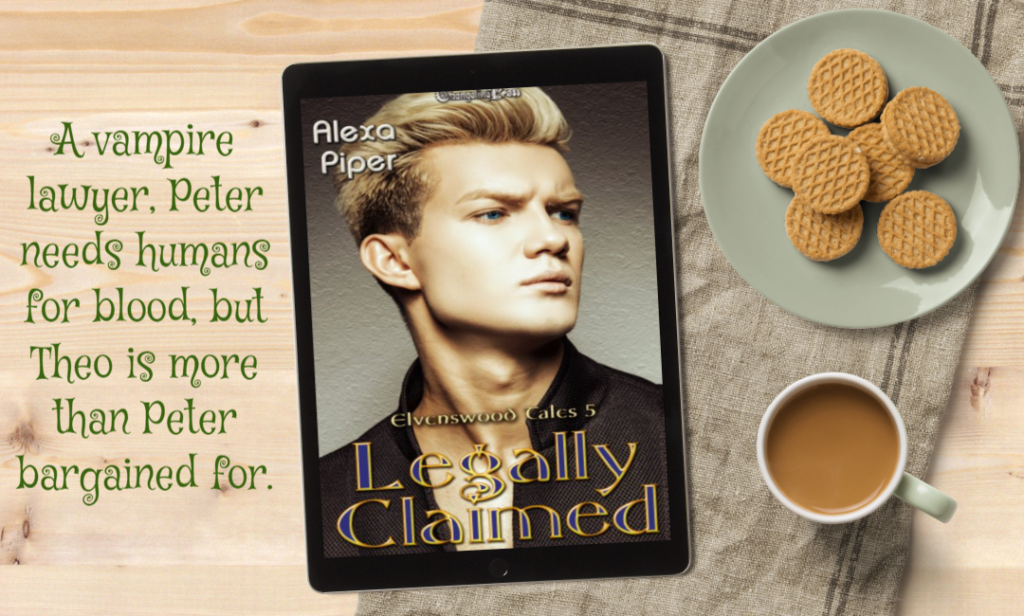