Someone To Watch Over Me New Release Blitz

Title: Someone to Watch Over Me

Arthur Adams takes his job seriously, keeping good guys safe and investigating bad guys. When his company is hired to secure the set for a film crew, the job seems straightforward, if not simple. Of course, the films are adult and graphic, so the situation can get hard fast. And it does.

Kit is an adult film star and an anomaly: he’s educated, experienced, and in the business for the fun of it. The seedy realities of his world reveal themselves, however, as his ex’s behavior grows more threatening. Unfortunately, the ex is wealthy and well connected in addition to being a stalker.

As Arthur watches Kit more closely, he finds it more difficult to look away.

The threats against the production become increasingly worrisome as Arthur’s team digs into the background of a rival studio, and they become personal as he unpeels Kit’s layers. As the case uncovers abusers, traffickers, and would-be murderers, all of Arthur’s skills and resources will be put to the test.

Someone to Watch Over Me
Libby Simone © 2022
All Rights Reserved

Arthur wraps a hand around his coffee mug and pulls apart the brittle beige window blinds to peer out at the street below. The morning is cool, even after the fog lifts. People pass quickly, hands in pockets. They do not look up. Steam radiates from the back of the newsstand across the street, and Arthur takes a sip, watching it curl and dissipate.

The building is mostly empty today. The pipes squeak upstairs, and something scurries in the walls. Business has been slow. Business is always slow.

“Coming.” He leaves the window and sets the mug on his desk, which he sidesteps to make his way to the door. He turns the corner and steps over the uneven floor plank. He scratches his elbow and raises an eyebrow. “What do you need?”

Maurice leans forward in his desk chair and fixes Arthur with an impassive gaze. His office smells of Big Red and sulfur, and he scribbles onto a steno pad with a stubby yellow pencil. Arthur leans against the doorframe and watches. The desk is cluttered, as usual, with a gas station coffee cup, photographs, and the morning paper. Maurice gestures to a seat, and Arthur shakes his head. “I’ll stand,” he says, provoking an annoyed glare.

“Suit yourself.” Maurice runs his hand across the desktop. It’s easily the sturdiest piece of furniture in the place, bought secondhand from an auction at the old library. They had to haul it in through the window, and Arthur is convinced someday it will fall through the floor. It hasn’t yet. It probably won’t until Maurice retires and he’s sitting behind it instead. “Client coming by in a few minutes. I’m putting you on this one.”

“Because I’m assigning this one to you.”

“It’s going to require coordination with an outside security team.”

“I don’t give a damn what you like, son. You’re good at it, and I’m assigning you the case. That’s the end of the story. You got something to say?”

“No.” Arthur grinds his teeth.

Maurice nods and unwraps a fresh piece of chewing gum. “Let her in when she arrives. And clear your datebook.” He snorts at his joke.

“Anything I should know first?”

“I’d hate to spoil the surprise.”

The surprise arrives promptly at ten, as if she waited outside the frosted glass door until the turn of the hour. She is striking, with coal-black hair and piercing blue eyes, outlined dark despite it being a weekday. She wears a tidy knit suit with a well-tailored skirt and silk shirt buttoned high on her neck. “Therese Spielman,” she says, shaking his hand. Her skin is ice cold, and her grip is tight. “Pleasure.” She doesn’t smile, but most people don’t when they hire a private investigator. Arthur leads her to Maurice.

“Welcome. Please, have a seat.” The vinyl on the chairs splits and flakes, but they’re serviceable. If Therese notices, she’s too polite to complain.

“You’re the gentleman I spoke to on the phone.” She glances from him to Arthur and lifts a meticulous eyebrow.

Maurice tilts his head in a nod. It’s easy to spot, even if Arthur no longer calls him by rank. “You said you want someone who can coordinate your security team. Arthur’s the man for the job.”

Arthur clears his throat. “And what exactly is the job?”

“We are a long way from Hollywood, it’s true. But, yes, I assure you, we make films too.”

Therese watches him and purposefully nods. “You’ll do.” She looks him up and down again. “You’ll do nicely, and if that”—she pointedly looks down—“matches the rest of you, I may have even more work for you than securing our warehouse.”

Maurice shrugs and unwraps another piece of gum. He takes out his chewed piece and sticks it to the lid of the coffee cup. “I tried to get details over the phone, but she’s prickly as fuck, and cagey. Said they’ve received some threats—notes and letters warning them to close up shop or else. Looks like the whole thing probably has something to do with a rival company. She’s worried about a stalker. They’re shooting for two weeks in the warehouse district, down by the docks. Basically, she doesn’t want questions asked; she said she just wants”—he reads from a note—“‘a smooth production schedule.’”

“I’m not sure that’s the relevant question.”

“You’re right. Why do they need extra security? What rival company?”

“Tell me about the threats.” 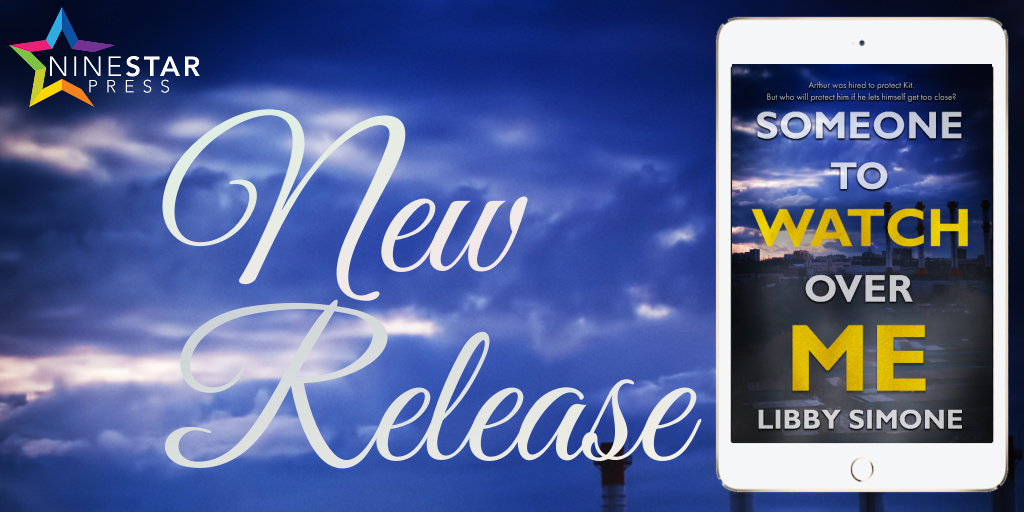 Libby Simone lives in Kansas City, where she learns for a living and writes for fun. When she isn’t designing research or napping, she can be found taking long walks, people watching, and dreaming up different worlds.