Witches of Wildwood:
Cape May Horror Stories and
Other Scary Tales from the Jersey Shore
Mark W. Curran
Genre: Horror/Speculative Fiction
Publisher: NMD Books
Date of Publication: Sept 15, 2017
ISBN: 978-1-936828-51-7
Number of pages: 300
Word Count: 83,365
Cover Artist:  Robert Gonzales
A Collection of Contemporary Horror Fiction
Book Description:
Werewolves... vampires... swamp beasts... zombies... even a Jersey Devil... all of these chilling creatures and more await you in this haunting collection of 11 contemporary horror fiction stories by Mark Wesley Curran. Uniquely set 'down the shore' in South Jersey's Cape May County, these scary tales are sure to terrify and entertain both adult readers as well as young adults.
The spooky offerings include:
- An abrasive radio talk show host is stalked by an angry werewolf in 'Werewolves of Dennis'
- A Fun Pier boardwalk worker falls under the spell of a strange attic dwelling girl  in 'The Girl In The Attic'
- An ancient sailing ship filled with bloodthirsty zombies crashes into the Jersey Shore in 'Night of the Wildwood Dead'
The cornerstone of the collection is 'The Witches of Wildwood,' the harrowing and suspenseful tale of a witch-hunting preacher hell-bent on killing four teenage sisters determined to destroy the world from their Wildwood boarding house.
This collection contains:
The Girl In The Attic - Dante's Inferno At Castle Dracula - Neptune's Revenge - Night of the Wildwood Dead - Captain Harvey's Wildwood Seafood Palace - Showdown In Anglesea - The Fortune Teller Machine  - Jersey Devil - Werewolves of Dennis - Swamp Beast of Grassy Sound  - The Witches of Wildwood [novella].

Dante snapped out of his flashback in a startled daze.

He tried shutting the images out of his brain as he swam through the smoke and flame – peering forward as the shaft of white lantern sliced through the smoky darkness. As he walked the creaky floorboards, he heard the groaning and falling of smoky timbers in the unseen floors above him; he knew the ceiling could give way at any moment. His radio crackled with warnings to exit the building immediately. He reached down to his radio, switching it to off, then fought his way through the haze and flame.

He fought hard against the images; the memories as ghosts floated around him; he saw visions of his father, a fifth-generation firefighter, his tough, angry face floating disembodied on a thin veneer of white smoke. Then the image of his father: lying in a casket in a Northeast Philly funeral home, looking like some strange wax figure from a horror movie. The embalmers and makeup people had done the best they could but there was only so much that could be done with burn victims. It had been a fire in Manyunk, a section of Philly, that had taken his life.

Dante fought against the exhaustion and inertia he’d been feeling for months now; tried putting it all out of his mind; the divorce from Kathy; losing the custody battle; losing their home to the mortgage crisis. Guilt and depression had dogged him for the better part of his life, but a man had to remain strong, to fight his way through it, that’s what his parents and friends had told him.

It’ll pass, they said, in the meantime, man up.

But they could not know the debilitating effect of depression, how it freezes you and turns your life into a living nightmare of psychic pain. He’d tried sleeping it off, twelve hours a day; he’d tried drinking it away but it only made matters worse.

Snap out of it, they all said. Tough it out, Petrillo, suck it up. Yeah, he thought, if I don’t snap first.

The roar above his head was an angry crescendo; it sounded like a thousand railroad trains thundering over his head. He pushed forward into the oily black smoke and the ominous arms of orange and yellow flames that reached out all around him like angry beckoning spirits.

There was crashing overhead as sections of the burning roof fell into the floor above him. It did not slow his resolve or lessen his courage, he simply pushed the fear down below the surface He heard voices ahead of him. He stopped dead and tried to ignore the ghosts. Ahead of him in the glow of flame and smoke was Gracie-Lynn, his mother – the strong, silent pillar of strength that had endured so much before she’d died.

For years she’d dealt with his father’s unspeakable anger, the deep bouts of depression, the unexplained rage that would erupt in a split second into violence. 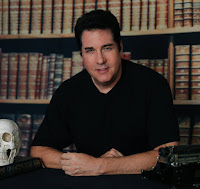 Mark Wesley Curran is a writer of contemporary fiction, specializing in the horror and suspense genre. Born and raised in Suburban Philadelphia, he spent many summers living and working in Wildwood, New Jersey during its heyday. He now resides in Los Angeles where he enjoys creative pursuits as a writer, filmmaker and musician. He moderates the Horror Fiction Central website and edits the weekly horror fiction Newswire, resources for fans of horror fiction.
Website: http://www.witchesofwildwood.com
Twitter: https://twitter.com/MarkWesleyCurr1
Facebook: https://www.facebook.com/WitchesofWildwood/
Horror Fiction Central: www.horrorfictioncentral.com 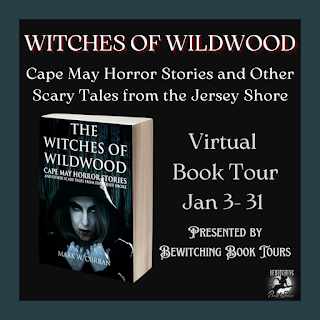