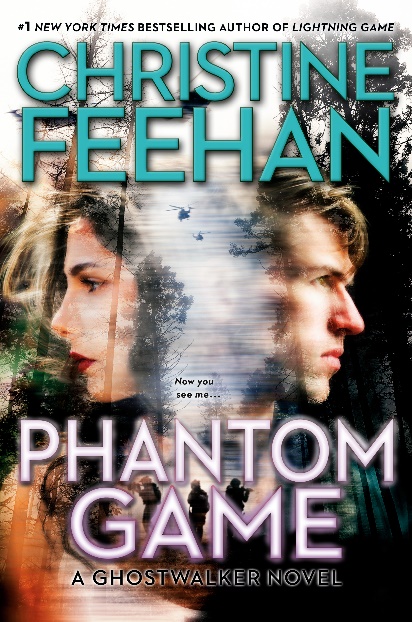 Two predators collide with unbridled passion in this intoxicating GhostWalker novel from #1 New York Times bestselling author Christine Feehan. Jonas “Smoke” Harper has watched his brothers find their perfect mates, never imagining he’d actually meet someone who complements every part of him—even the monster that lurks within. But his instant connection with Camellia goes far beyond wanting the intelligent, beautiful, and lethal woman in his bed. They are two parts of a whole, linked to each other and to a larger network that exists everywhere around them. Camellia has lived on her own for a long time, relying on her unique psychic abilities to keep her safe. She knows that Jonas was literally made for her, and that makes their addictive connection more dangerous than a thousand enhanced super soldiers. Once the larger threat looming over them is dealt with she’s going to get far away as fast as she can. Life has taught her that the only one she can truly trust is herself. Jonas can sense Camellia is going to run—and the hunter inside doesn’t want to let go. Not when he knows how good they’ll be together. So he’ll just have to use all of his considerable skills to convince her to stay....

Momma Says: 4 stars⭐⭐⭐⭐
A match made - well, a match made by a mad scientist. The premise for this series is so unique. I mean, we've all at least heard stories about enhanced super-soldiers, but this one takes it a step further and includes a made for him mate. Camellia and Jonas have terrific chemistry, a chemistry they can't deny no matter how hard one of them may try. The beginning of this one was a little bit slow to start, but once things get going, it's fast-paced and the tension is through the roof. There is also some catch-up time with past series favorites for those who have followed the series. The whole thing has a found family vibe, which I love, and the characters are likable and interesting. There is a lot happening here, but rather than get too far into spoiler territory, I'll just say I thoroughly enjoyed the action, the romance, and the storyline.

Camellia Mist paced back and forth in the confines of her small house, feeling a bit like a caged animal. She felt a threat approaching across the periphery of her senses, but not a single one of her warning systems had raised an alarm. There were three men camping just inside the lines of her property. It had never happened before, but that didn’t mean it couldn’t. Besides, the threat didn’t feel as if it was coming from them.

The men were sick and disoriented, at least from what she could discern from the reports of the owls and wolves she had keeping a close eye on them. One of the men in particular looked to be in bad shape. He was apparently the most affected by the sonic disruptions she’d woven into the mist. She didn’t like making innocent hikers ill, but she had to keep them away from her gardens—and from her. She hoped they would camp for the night and get back on the main trail. In the morning, she planned on doubling the mist around them, leaving just a slight opening to lure them away from her refuge.

Still, she had this terrible, nearly overwhelming feeling of doom. That was never good. She didn’t have premonitions often, but when she did, they weren’t without cause. She felt . . . hunted. Had Whitney found her? She couldn’t imagine that he would. She had been very careful not to leave any trace behind. So very careful.

She’d avoided people, lived off the land, become a complete recluse. She was almost entirely self-sufficient up here in her secluded little garden, and the few times she needed supplies she couldn’t harvest, hunt or make herself, she snuck into town at night and broke into stores, avoiding the cameras, careful to take only what she absolutely needed to survive. She always took enough supplies to see her through several months so she wouldn’t have to make trips during winter months when the snow was deep and shut down the trails and roads.

How would Whitney have found her? He always planted tracking devices in the women, but she found the one in her hip and cut it out. It hadn’t been that deep. Had there been a second one? If so, why would he have waited so long before he sent someone after her?

Chewing at her lower lip, a nervous habit Whitney had detested in her and in all the girls, Camellia went to the bed and lay down so she could run her fingers over her skin to feel for any foreign object, no matter how small. She had very sensitive fingertips. More, the blood in her veins was connected to nature, to the plants that grew within the perimeter of her land. She tapped into that environment now, seeking an outside source to aid her in examining her body for anything that Whitney may have surgically placed in her without her knowledge. She found nothing.

No trackers, then, that she could find, yet that feeling of dread refused to go away. If anything, the awareness of a predator closing in on her increased to such an extent that she leapt to her feet and rushed to change into clothes made of soft, organic material that would blend with her garden and allow her to disappear at will. Since no warning had been triggered, she couldn’t explain why she was so certain someone was stalking her, but she was absolutely sure. She needed to be outside where she could see what was happening around her and let her plants talk to her.

If the threat was beyond her garden—could it be coming from the GhostWalkers who, as she’d recently discovered, had well-established fortresses several miles below her on the steeper side of the mountain? She would reach for the reptiles, the frogs and lizards. GhostWalkers rarely suspected them, where they often did birds and mammals. Just the idea that a GhostWalker might be stalking her was terrifying.

From PHANTOM GAME published by arrangement with Berkley, an imprint of Penguin Random House LLC. Copyright © 2021 by Christine Feehan.

Christine Feehan is the #1 New York Times bestselling author of the Carpathian series, the GhostWalker series, the Leopard series, the Shadow Riders series, and the Sea Haven novels, including the Drake Sisters series and the Sisters of the Heart series. Learn more online at christinefeehan.com.
at February 28, 2022