✱✱Book Review✱✱ LIGHTNING IN A MIRROR by Jayne Ann Krentz 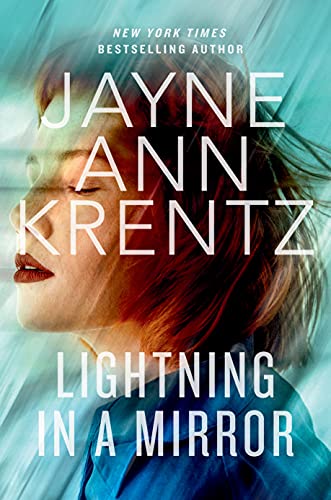 PI Olivia LeClair wasn’t sure what to expect when she signed up for the Four Event Success Guaranteed speed dating package, but a run-in with a serial killer certainly wasn’t at the top of the list. Thinking it couldn’t get much stranger than that, Olivia decides to give it another shot. Of course, when you’re a powerful aura reader from a mysterious town buried under government conspiracies, strange doesn’t even begin to cover it.

So, when Harlan Rancourt, the rightful heir to Olivia’s employer the Foundation and a man long thought to be dead, shows up at the next round of speed dating, she takes it in stride. After years on the run from the Foundation, Harlan is sure that he’s finally found a lead on the mysterious Vortex lab at the heart of the Bluestone Project—the very project that altered the DNA of every resident in Fogg Lake. He’s convinced that Olivia, a direct descendent of powerful oracles in Fogg Lake, is the only one who can help him locate the lab.

Olivia, however, isn’t so sure. First off, she’s not an oracle. Sure, she has some powerful psychic energy, but so do plenty of other people. Second, she doesn’t really know if she can trust Harlan. While he looked perfectly unmemorable on the  surface, Olivia could sense from the moment she met him that he was more powerful than the Foundation could ever know—and there was the very real possibility that had only resurfaced to claim his inheritance. But when Harlan tells Olivia that Vortex may be the key to uncovering her mother’s killer, she has no choice but to follow him into the very depths of danger and secrecy before those hunting the lab—and the oracle at its center—catch up to them.

Momma Says: 4 stars⭐⭐⭐⭐
No matter the genre or pen name, I know I can depend on this author to give me a story I can't put down. Lightning in a Mirror is a terrific mixture of paranormal thriller, action/drama, and even some romance. Olivia is a great heroine, and she's easy to root for as the tension builds and the story gets more and more frantic. There's a lot going on with conspiracies, hidden labs, and figuring out who to trust, but Krentz does it up right, and brings it all together for a satisfying conclusion. This book brings the Fogg Lake Trilogy to a close, but it's not the end of these characters for me. Jayne Ann Krentz has created a fascinating world here with characters I wouldn't mind visiting from time to time. The pacing and action make this one of those books I can picture on the big screen, and if that were to happen, I'd be there on opening night, ready to take it all in again.

Jayne Ann Krentz is the author of more than fifty New York Times bestsellers. She has written contemporary romantic suspense novels under that name and futuristic and historical romance novels under the pseudonyms Jayne Castle and Amanda Quick, respectively. Learn more online at jayneannkrentz.com.
at February 25, 2022