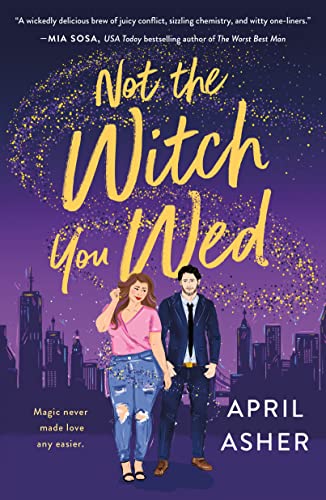 A fake relationship between a magic-less witch and a wolf shifter turns to more in the start of a bewitching new paranormal rom-com series.Magic-less witch Violet Maxwell wants nothing to do with alpha wolf shifter Lincoln Thorne—the man who broke her fragile, teenage heart. But when the two of them are forced by arcane Supernatural Laws to find mates, Violet and Lincoln agree to fake-date their way to a fake-mating in order to conjure themselves some time.The joke’s on them. When old feelings make a reappearance—along with Violet’s magic—they both realize there’s nothing fake about their feelings. But there are old secrets and looming threats that could snatch away their happily ever after, again. One thing’s for sure: magic doesn’t make dating and love any easier.In Not the Witch You Wed, April Asher brings all the hilarity and sweet, sexy moments you love in a romantic-comedy—plus a fun dose of magic—to this spell-binding new series about being sexy, single, and supernatural in New York City.

Momma Says: 4 stars⭐⭐⭐⭐
It all starts with the catchy title and delightful cover. Those two things caught my attention right off the bat. Then I read the blurb and had to read this book. A paranormal rom-com and it's the start of a series! I'm in! The story is as much urban fantasy as paranormal romance, and it is witty and fun from the start. The romance is second chance, enemies to lover, and fake dating all rolled into one. Enemies to lovers is always good for banter, and Violet and Linc are hilarious when they get started. There's a fine line between love and hate, and this couple dances all over it.
There are a lot of characters to keep track of and several are introduced at the beginning. To be honest, I wasn't sure if I was going to be able to sort through and remember who's who, but April Asher makes each one distinguishable. It didn't take long and I remembered who was doing what and who belonged to which supernatural group. Asher gives them all to us in this fantastical world - witches, shifters, demons, angels... There's even a succubus! Not the Witch You Wed gives us a witch with no magic (or sleeping magic?) and a wolf shifter, and the chemistry is off the charts whether Violet wants to admit it or not.
So, the story may have started out a little confusing, at least for me, but that didn't last long before I was totally invested in these characters and their world. Now that I've visited, I want to go back, so I'm over the moon that this is a series, and I'll be watching for whatever comes next.