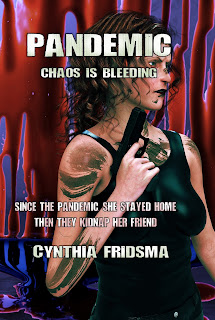 Pandemic: Chaos is Bleeding
Cynthia Fridsma
Genre: horror/thriller/urban fantasy
Publisher: CynhiaFridsma.COM
Date of Publication: November 24, 2021
ISBN Paperback: 979-8773139225
ISBN Hardcover: 979-8779427166
ISBN Audiobook: 978-1669614173
ASIN: B09MJXPCMY
Number of pages: 280
Word Count: 67,415
Cover Artist: Cynthia Fridsma
Tagline: Since the pandemic, she stayed home. Then they kidnapped her friend.
Book Description:
Since the pandemic, Sybil Crewes hasn’t left home. She stopped her duties as an ATU agent (Anti-Terrorism Unit). But then, she got a disturbing phone call. Her friend, Harry Brown, has been kidnapped, and this forces Sybil out of her house.
While doing so, she uncovers an illegal lab where they created a deadly COVID-19 variant that turns its victims into skinned zombies. She contacts the ATU to resume her duties as an ATU agent to stop the new threat and save the world from its undoing.
Pandemic: Chaos is Bleeding is a fast-paced modern horror/thriller novel, and partly based on true events.
Book Trailer: https://youtu.be/OEmedgf3w0c
Amazon      Kobo      Google

The cold air was refreshing as she sprinted to her Ford Mustang in the parking lot. After she sat down in the driver’s seat, she opened Windows Maps on her cell phone to search for the address her evil handler had texted. Since Microsoft stopped supporting Windows Phone, she couldn’t use her voice to enter the address in the navigation app of her cell phone.
It felt weird to go unarmed, on a mission unknown, while the navigation calculated the best route from her current location. Whoever captured Harry held all the cards. At the moment, she had no other choice but to follow up on their instructions. She started the car and drove off. Luckily, there wasn’t much traffic on her way to the mansion.

Since the pandemic, life was slow. People had more time on their hands, working from home, distracted by their kids and spouse. Eating more comfort food—watching TV all day, or in Sybil’s case, spending time with her pet rabbit, Max, and trying to avoid the news. She didn’t have a TV. Well, she did, but she used her 70-inch display as a monitor. It was connected to a Windows 10 laptop with an external soundcard attached to a Dolby digital surround set. Felicity installed the equipment and showed Sybil how to use her dinosaur cell phone as a remote control for the laptop.

The laptop offered her a safe window to the world. She had online meetings once a week, on Sunday night at eight, and sometimes she watched the news on CNN. Most of the time, she used the laptop to binge-watch streaming media. Prime video, Netflix, Disney Plus, and reruns of her favorite TV shows: Body of Proof, Buffy the Vampire Slayer, and she loved movies starring Denzel Washington. My life during the pandemic.

She wanted to floor the gas pedal, but then she noticed a police car and she slowed down considerably. The police vehicle turned left at the intersection. She glanced over her shoulder. A truck came into sight, and a few more cars appeared on the street ahead of her. Morning rush hour was about to begin, even though she hadn’t expected it.

Sybil reached her destination in twenty-six minutes after she floored the gas pedal when she reached the outskirts of Boston. She had some time to kill, but she didn’t want to waste it by sitting in her car. So, she explored the area. The mansion didn’t stand out by itself. It was a wooden, two-story building, Victorian architecture style, late 1800s, set in a rural landscape outside Boston, normally a thirty-five-minute drive if she hadn’t gone way above all posted speed limits. Its shingles used to be white at some point.

She exhaled and contacted Vanessa Dogscape—an ATU data analyst, and currently married to her friend and coworker Felicity Walker. Perhaps Vanessa could help her—off the record. She didn’t want to involve the ATU. It took a while before Vanessa answered the phone.

“Sybil. You know what time it is?”

“I’m aware of what time it is. Look, I need your help. Harry’s been kidnapped by—I don’t know who. Anyway, they want me to do some errands.”

“My God!” Vanessa replied in a worried voice.

“I need you on this. But please, keep it off the record. I don’t want to endanger Harry’s life.”

“Perhaps you can pinpoint them somehow and get their location so I can kick some ass?”

“I need more intel before I can do anything,” Vanessa said.

“They contacted me via my cell phone and sent me a text message. Oh, and a picture of Harry’s battered face.” She gritted her teeth at the thought.

“Send the text message and the picture to me. And please activate the ATU app Felicity programmed three years ago for your Windows Phone, so I can tap into each conversation and perhaps ping their location while you talk to them. Are you sure you want me to help you off the record? It’s better to make this an official ATU investigation. At least, let me inform Jack.”

Sybil closed her eyes for a moment. If the criminals found out she had informed the ATU, it’d complicate things. Perhaps endanger Harry’s life. But then again, she sure could use all the help she could get. Otherwise, she wouldn’t bother Vanessa with it. Taking that into consideration, and the knowledge that Jack was a professional, Sybil agreed to Vanessa’s suggestion.

Despite the sun in a clear, blue sky, her body responded with a shiver that ran down her spine. She did not know what to expect as she stood near the abandoned mansion with its weather-beaten, cracked walls covered in pointless graffiti. But she knew she had to go inside as she sat down on her haunches, studying the rusty sword lying in the mud. She took a deep breath before she carefully touched its sticky handle. Blood! Clotted blood.

Her stomach gnawed at the sight. She smelled. It wasn’t human. She stared at the mansion as she heard a strange sound she couldn’t identify. Immediately, her old instincts kicked in—weird sounds coming from an abandoned mansion equals danger. She grabbed the sword in both hands, jumped up, kicked the battered door wide open and ran inside. It was time to act; this was no time to be cautious. Lives were at stake.

The wooden planks creaked under her feet as she rushed into the dark hallway. The sound of rasping breathing reached her eardrums when she entered a dark room with just enough light to see the overturned furniture and the bloodstained, fractured walls … 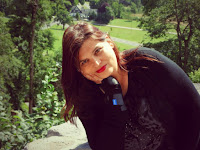 About the Author:
As far back as she can remember, Cynthia Fridsma has been listening to exciting stories told by her mother. She grew up reading books by Edgar Allan Poe, H. P. Lovecraft, and Philip K. Dick, among others. It was Cynthia’s mother who inspired her to start telling—and writing—her own stories. 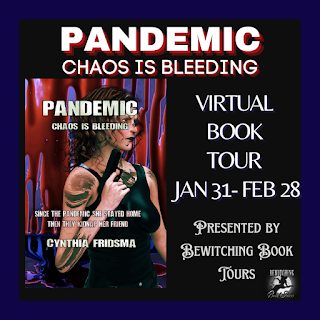