The Billionaire's Slave Tour and Giveaway 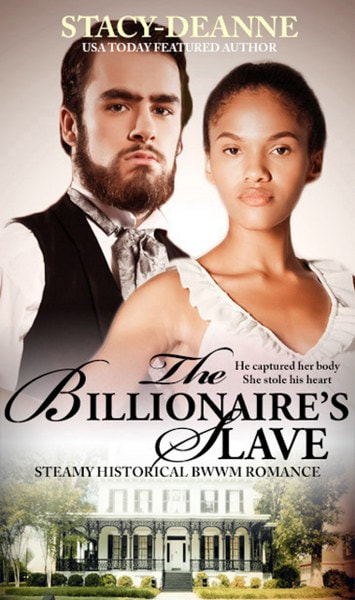 From the first time Leon Falcon sets his eyes on Penny, he wants her.

Usually, a gentleman of his stature would woo a woman, court her and get her father’s blessing. But Falcon doesn’t have to do any of that with Penny because it’s 1864 South Carolina, she’s a slave, and she can’t say no to him or any white man.

Falcon’s plan is simple: first, he’s going to buy her. He’s going to teach her. And then he’s going to take her. But it isn’t long before he realizes he’s the student once Penny opens his heart to a love so powerful, it transcends every force that dares to tear them apart. 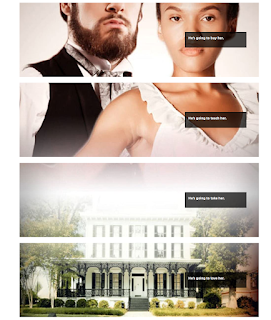 Penny sat in the carriage next to Leon Falcon as he steered them through the woods. She couldn’t get Rose’s warning out of her head. Even Falcon didn’t rescue Penny from the fear of what Rose said.

Penny owed her? And she’d collect one day.

Penny exhaled, the bodice squeezing her guts as she did. She looked at Falcon, who sat erect with perfect posture, hat tilted and gloved hands gripping the reins. The horse gallantly trotting along.

She still couldn’t get over the shock that he’d showed up on his own to pick her up. She glanced at her suitcases that wobbled against each other in the back of the carriage. Now they were truly alone. This is what she’d dreamt about since meeting him.

So why was she so nervous?

“You look pretty today, Penny.” He tilted his head to her, chuckling. “I’ve already told you twice but can’t seem to say it enough.”

His attention remained on the desolate road. “Hmm-mmm?”

“Why did you pick me up today?” She lowered her voice. “Why not send your slave? Isn’t that what massas usually do?”
A crooked smile came upon his lips. “I’m not like other masters, Penny. I thought you knew that.”
She looked ahead, grimacing. “How I’s know it? I’s just met you.”

She grimaced, looking at him. “What?”
He grinned. “You heard of a kindred spirit, Penny?”

She nodded. “I’s think it’s when two peoples share the same interests and desires. Is that right, Massa?”

He smirked at her. “You’re so smart. All that reading you been doing. Who taught you?”

“Rose.” She tangled her fingers together. “Rose taught me a lot of things.”

“No.” He watched her from the corner of his eyes. “I mean, she likes you, Penny. She wants you. You know, like a woman wants a man?”
“Massa? Rose and I’s like sisters.”
“Haven’t you noticed how she looks at you? Come on, Penny. The first time I came to the house, I knew she wanted you. The way she looked at you and the way she looked at me…” He whistled. “Like she wanted to stick that fireplace poker in my eye.” He laughed. “Maybe Conrad and Catherine don’t see it, but I sure do. I rescued you, Penny. ‘Cause I don’t think Rose was good for you.”
“Why would you say that, Massa?”

“She’s sneaky. Her ways. I can tell. Dangerous and doesn’t seem to give up what she wants.”

“At the house before we left, you said she could visit me.” Her heart beat faster. “I’s hope you really meant it, Massa.”
“I mean everything I say. Course Rose can visit you. I know she means the world to you, but I’ll protect you from her ways. As your master, that’s my job. No one else’s.”

She sat back. “I’s still don’t understand why you picked me up yourself.”
“I wanted to be alone with you.” He smiled at her. “I’d like to get to know you a little better.”
“Of course, Massa.”

“How’d you land with the Conrads?”

“The Conrads say I’s a orphan. Don’t remember anything before Massa Conrad. I was little when he bought me.”

“What about your slave family? Do you know them?”

She shook her head.

“You ever think about them? You have to wonder about your real mother and father? Whether you got any siblings?”

She shrugged. “Ain’t neva thought about it much. Besides, Rose always say you can’t miss nothin’ you neva had.”

“Where did you get the name Penny from? Did Catherine name you that?”

She nodded. “It’s Penelope after her grandmother. I’s flattered to be named it.” She

smiled but felt odd when he looked at her, so she stopped. “May I’s ask you a question, Massa?”

“Sure. You can ask me anything.”

“You lost your wife?”
He flinched.

“She died.” His voice came out weak. “In childbirth.” His upper body tightened up, and that confidence he always displayed dissipated before Penny’s eyes.

“That’s terrible, Massa. You lost your baby and your wife? I’s sorry if I upset you.”

“You didn’t upset me, Penny.” He wrestled with the reins. “I want you to promise me one thing. Never apologize for being curious.”

“Okay, well I’s ask another question then. Why’d you give me that naughty book?”

He cackled. “It’s not naughty. It’s a love story.”

“All that grinding and humping?” Penny giggled. “Not a book a young lady should be readin’.”

“But I bet you read it though, didn’t you? Repeatedly?”

She swallowed, her heart beating out of her chest.

“Did you do anything else when you read it?”

His eyebrow raised. “Did you touch yourself, Penny?”

Her hands shivered and sweat broke out on her forehead.

“Nothing wrong with touching yourself, Penny. It’s natural to bring pleasure to oneself.”

“Do… you touch yourself, Massa?”
“Oh, yes. In fact, I did it before I picked you up. I got so excited to see you and I had to pull over because I couldn’t contain myself.”

Stacy-Deanne (Dee-Anne) is an award-winning author of romantic suspense, mystery, thrillers, contemporary romance, historical romance and women's fiction books. She's written Top 100 bestsellers, and her work has been praised and reviewed in USA Today numerously. She loves writing stories that focus on main characters who rarely get the spotlight such as characters with physical disabilities, mental illness, and terminal diseases.

Stacy is known for bringing versatile stories to her readers. With her you never know what you're gonna get, which separates Stacy's work from the pack. Stacy's books are full of passion, thrills, intriguing characters and so much emotion you can't get enough! If you want something different and unpredictable then definitely check out her work.