The Cross of Ciaran by Andrea Matthews Virtual Book Tour 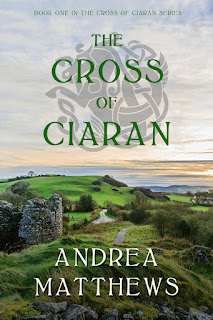 The Cross of Ciaran
The Cross of Ciaran Series
Book One
Andrea Matthews
Genre: Paranormal Romance
Publisher: Inez M. Foster
Date of Publication: June 18, 2020
ISBN:  978-1-7333375-1-9
ASIN:  B08BJ1QRGM
Number of pages: 362
Cover Artist: Jenny Quinlan
Tagline:  Can a fifth century pagan priest find love with a twentieth century archaeologist or will his secrets shatter their future together?
Book Description:
When a fifth century pagan priest is unearthed in Ireland fifteen hundred years after being entombed, archaeologist Caitlin O’Connell is convinced it’s the find of the century. The body is in perfect condition, right down to the intricate tattoos adorning the Celt’s skin. In fact, if scientific data hadn’t proved otherwise, she would swear he hadn’t been interred more than a few hours.
Eager to discover more about the mysterious Celt, Caitlin accompanies the body back to the New York museum where she’s employed, but before she has time to study him, the priest disappears without a trace. Rumors surrounding the event begin to circulate and result in the excavation’s benefactor pulling the plug on the entire expedition.
The rumors are not far off the mark though. After being buried alive for betraying his goddess and his priesthood in the dawning age of Christianity, Ciarán wakes to a strange new world. Alone and frightened in an unforgiving city, he stumbles upon the only thing familiar to him and seeks sanctuary within the church walls. With the help of the parish’s pastor, Father Mike, Ciarán slowly grows accustomed to his surroundings, though he’s plagued by dark dreams and the disturbing sensation that an evil from his past has followed him into the future. But a more immediate danger lurks on his doorstep.
Caitlin is determined to get to the bottom of the mystery concerning her missing Celt, and when she meets her Uncle Mike’s new handyman, Ciarán Donnelly, she’s convinced the handsome Irishman knows more about the theft than he’s letting on. Yet, even she can’t deny the attraction between them, simmering below the surface and blurring the lines between her personal and professional life. But will Ciarán’s secrets draw them together or shatter their future forever?
Amazon

Ciarán stumbled along beneath the twisted canopy of blackthorn shrubs, their prickly branches entwining with those of the hawthorn to form a mystical passageway. Though only a dim grey light pierced its knotwork, intermittent flashes of lightning broke through the tangled vines to sketch eerie patterns across the moss-covered path. His robe caught on the spiny bramble, and he stopped for a moment to free his sleeve, but a sharp shove from behind thrust him forward once more, the sudden movement ripping a jagged hole in his fine linen robe.

His temper flared, and he turned to object, though it did no good. Another quick jab to his shoulder spun him back around and thrust him out into the lakeside clearing. Slender stone columns stood in a semi-circle around its perimeter, each one facing the sacrificial altar. He rested his hand against the one to his side, steadying himself as the reality of the situation washed over him in a wave of nausea. There would be no escape.

As if in agreement, a bolt of lightning ripped across the horizon, followed by a crash of thunder so loud it caused the breath to catch in his throat. The goddess was angry.

Out of nowhere, thick grey clouds had formed to conceal the morning sun and cast ominous shadows over the secluded enclosure. The urge to fall prostrate before his goddess mother gripped his innards, tearing at his stomach with a fiery knife, but he could not find it within his heart to do so. A black-robed cleric propelled him further into the temple confines, forcing him to his knees beside another of the slender gray columns. The decision to kneel had been made for him, though it was an empty gesture on his part.

Trying to retain his composure, he gazed around the quiet glade. Towering thorn bushes encircled the clearing, concealing the sanctuary from the outside world and providing a perfect setting for worshipping the goddess of their tuath. The bile rose in his throat, for he knew the requirements for admission all too well. Entry to its sacred confines was only granted to those within the priesthood and those about to die. 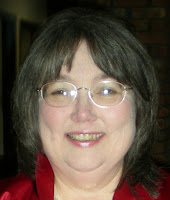 About the Author:
Andrea Matthews is the pseudonym for Inez Foster, a historian and librarian who loves to read and write and search around for her roots, genealogical speaking. She has a BA in History, an MLS in Library Science, and enjoys the research almost as much as she does writing the story. In fact, many of her ideas come to her while doing casual research or digging into her family history. She is the author of the Thunder on the Moor series set on the 16th century Anglo-Scottish Border, and the Cross of Ciaran series, where a fifteen-hundred-year old Celt finds himself in the twentieth century. Andrea is a member of the Romance Writers of America, the Long Island Romance Writers, and the Historical Novel Society.
Website:  www.andrea-matthews.com
Twitter: https://twitter.com/AMatthewsAuthor
Facebook:  https://www.facebook.com/andreamatthewshistoricalromance
Instagram: https://www.instagram.com/andreamatthewshistoricromance/
Goodreads: https://www.goodreads.com/author/show/19718311.Andrea_Matthews
BookBub:  https://www.bookbub.com/profile/andrea-matthews 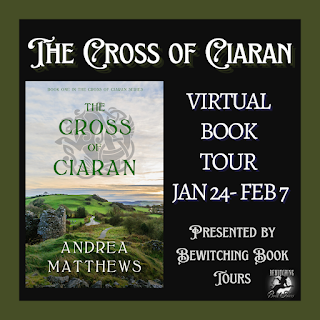