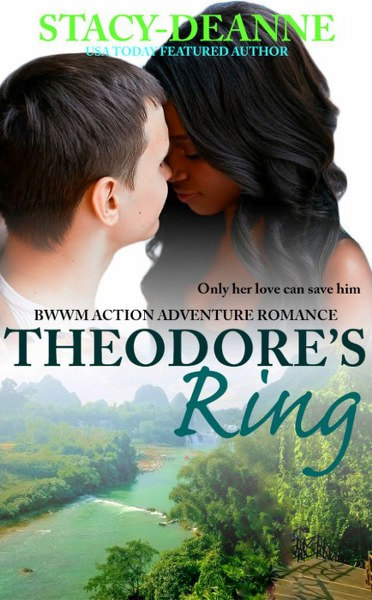 Damn, you know you’re in love when you’ll go into the jungle, dodging bullets and fighting killers just to get your man back.

Either that or Lydia’s just crazy as hell.

When ruthless Efrain kidnaps Lydia’s boyfriend Cam and demands she delivers Theodore’s Ring, a legendary artifact worth millions, Lydia races to the Casanu jungle to save her man. You go, girl!

She embarks on the journey with her ex-lover, Sullivan, (say what now?), who agrees to help her even though he wants her back and vows to make her his, whatever the cost.

Cam is toast if Lydia doesn’t deliver the ring within days, but throw in harsh terrain, three mysterious strangers, a duel with a King Cobra, and an ex who can’t keep his hands to himself, and Lydia quickly realizes saving Cam and being stuck in the jungle with no hair products is only half the battle.

“Cam?” Thirty-three-year-old Lydia Quarter busted into the two-story flat she shared with her boyfriend Cameron Griffin, ten minutes after receiving his text. “Cam, are you okay?”

She ran up the carpeted stairs. The aroma of Cam’s favorite honey and oat granola bars hit her the moment she entered the master bedroom.

Everything was in place except for his cellphone peeking from underneath the magenta sheet.

A figure in black shot out from the hallway and pounced on her.

A giant, gloved hand covered her mouth as she gurgled a scream. “Don’t be stupid.” The black ski mask muffled his light Spanish accent. “You going to be a good girl?”

“Do what I say and you won’t get hurt.” He tossed her on the bed and jumped on top of her.

“No!” Lydia wiggled, his burly body smothering her slim frame. “Don’t do this.”

His obsidian eyes glowed with sin. “Do what?”

“This.” She panted, her long, copper-brown weave getting into her mouth. “What do you want?”

“I thought I knew…” His hand cruised from her shoulders and onto her heaving breasts. “Now I’m not so sure.”

“Stop!” She kicked and bounced. “Get the fuck off me!”

“Oh, I heard you were a feisty one.” He smoothed his hand across Lydia’s arm, the

overhead light forcing out the yellow undertones in her brown skin. “You don’t disappoint, do you?”

“I’m not some woman you can just push around.” She wriggled. “I’ve been through hell and back in the last year, so there’s nothing you can do to intimidate me.”

“Is there something we can do to Cam to intimidate you?”

She lifted her head. “Where is he?”

He glided his fingertips through her hair. “He’s safe.” His fat tongue dangled

from between his lips, his purple mouth suggesting he smoked heavily. “It depends on you whether he stays that way.”

“So that’s what it takes to get you to behave?” He pinched her chin. “Threaten your lover?”
She closed her eyes. “Please, don’t hurt him.”

“We won’t if we get what we want.”
“What are you talking about?”
“Cam’s a stubborn bastard so he isn’t cooperating, but you will, won’t you, Lydia?”

He took out a knife with a jagged edge. “Because you love him and would do anything for him, isn’t that right?”

“Yes.” Her trembling bosom stretched against her blouse as she took a deep breath. “I’ll do anything to help Cam.”

“Hm.” He brought his face closer and sniffed. “You smell like flowers on a spring morning. I love that smell.”

She clenched the sheet with both hands as he groped her. “Just tell me what this is about.”

He squinted. “You know.”

She sighed, plopping her head back on the pillow.

“Now that’s a smart girl.” He cackled. “We know Cam buried the ring in the Casanu jungle.” He dragged the knife between her breasts. “You’re gonna get it for us.”

“What?” She jerked upright. “Are you insane? You expect me to go into the jungle and find the ring? I don’t know where it is.”
“Bullshit. You and Cam are so close if he farts you smell it first.”

“You’re probably the only person he’s ever told where it is. Maybe I haven’t made myself clear.” He pushed the knife into her bosom. “We’re not asking.”

“If you’re so big and bad, why can’t you go get it yourselves?”

“Because we weren’t the ones who stole it.” He settled the tip of the knife on her full lips. “This isn’t a game, Lydia. Get the ring or Cam’s dead. If you try to go to the police, your

boyfriend will be in a body bag before you can tell them what's going on.” He yanked her hair. “You hear me?”

A calmness came over his eyes. “You're an exquisite woman.” He groped her thigh through her blue jeans. “You’re getting me distracted.”

“Let me talk to Cam.” She pushed his hand away. “Please. I want to make sure he’s okay.”

“Cam’s a lucky man.” He slipped his hand between her thighs. “Must be nice to have someone like you in his life.”

“I’ll get the ring.” She turned her face away as he pressed his forehead against hers. “Just go.” She closed her eyes, praying with everything in her he’d just walk away.

“I have to leave so soon?” He pushed his slimy mouth to her cheek, the soft fibers of the mask tickling her. “We can have some fun.”

“No.” Lydia tensed up, every muscle in her body contracting.

“I could hurt you but I haven’t.” He snickered. “Don’t I deserve a reward for that?”

“What happened to the tough girl from a few minutes ago?” He puckered his lips, aiming for a kiss, when a faint buzzing sound erupted from his pants.

“Shit.” He leaned up, snatching the phone from his black jeans. “People always call at the wrong time, huh?”

Stacy-Deanne (Dee-Anne) is an award-winning author of romantic suspense, mystery, thrillers, contemporary romance, historical romance and women's fiction books. She's written Top 100 bestsellers, and her work has been praised and reviewed in USA Today numerously. She loves writing stories that focus on main characters who rarely get the spotlight such as characters with physical disabilities, mental illness, and terminal diseases.

Stacy is known for bringing versatile stories to her readers. With her you never know what you're gonna get, which separates Stacy's work from the pack. Stacy's books are full of passion, thrills, intriguing characters and so much emotion you can't get enough! If you want something different and unpredictable then definitely check out her work.