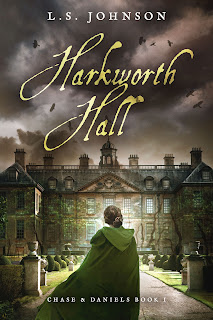 Harkworth Hall
Chase and Daniels
Book One
L.S. Johnson
Genre: Queer Gothic Romance/Horror
Publisher: Traversing Z Press
Date of Publication: 2017
ISBN: 978-0998893617
ASIN: B073QFH8WG
Number of pages: 166
Word Count: 38k
Cover Artist: Najla Qamber
Book Description:
Ask him about his wives.
Caroline Daniels must marry, and marry well. But in her remote corner of England eligible suitors are few and far between, and none hold a candle to her closest friend, Diana Fitzroy.
When Sir Edward Masterson arrives, he seems the answer to Caroline’s financial worries, though she instinctively dislikes the reticent, older merchant. Soon Sir Edward has set his sights on acquiring both Caroline and the decaying Harkworth Hall.
Caroline’s future seems secure, save that Sir Edward’s enigmatic secretary hints at a dark secret, and Sir Edward shows an unusual interest in the nearby bay. To discover Sir Edward’s true purpose, Caroline will have to face the horror beneath Harkworth Hall—and the woman who will change her life.
Books2Read    Traversing Z Press

I first heard of Edward Masterson the day of the birds, though I forgot about them through much of what happened after. Indeed, in the moment, their strange flight was only a disturbing inconvenience, as it turned my father back from his walk to the village on laundry day.

My father was a gentleman of small, regular habits. He walked to the village twice each week, to gain news of the wider world and have two pints of ale before walking back. In winter, he had Mr. Simmons, who served as our steward as well as sometime butler and valet, drive him. But in the fine weather of late spring he would set off walking, in his plain suit but with his sword polished and ready should he meet any ruffians.

The rest of our little household—myself and Mr. and Mrs. Simmons; my poor mother had passed when I was young—would plan much around this simple outing, for the house was too much work for the Simmonses alone. My father made no objection to my helping with light chores such as dusting, but he had recently been infected with the disease of matchmaking, and he feared for my prospects should I develop a working woman’s hands and complexion. His solution for our overworked staff was to simply hire more help as needed, but I often snuck into his study to review our account books and there was no surplus for such luxuries. Thus, I learned to separate want from necessity, and while other women my age were dancing at assemblies or practicing their needlework, I was scrubbing floors and learning to make pastry. I learned, and I learned as well to not reflect upon my circumstances, lest I fall into melancholy—and many days there was simply no time for such indulgence. As soon as my father left, I put aside my role as Caroline Daniels, landowner’s daughter, and became Caroline Daniels, maid, stableboy, or whatever we needed me to be. Laundry especially was a daylong affair, and more than once we had sent Mr. Simmons out to delay my father so we could get the last damp pieces inside before he returned.

My father left, drawing the door closed behind him. I waited in the hall, seeing in my mind’s eye his stout figure striding down the drive. Now he would pat his pockets, ensuring he had a shilling but little more, for he had once been robbed on his return and had a fine watch and several shillings taken off him. Now he would think about that watch, and touch his sword in reassurance. All was well and nothing was forgotten; he could enjoy his journey in peace, and we could set about our work. I counted to fifty, then with a deep breath seized the first laundry basket and began dragging it back to the yard—

—when I heard the terrible sound of the door swinging open again, and my father bellowing for Mr. Simmons. At once I dropped the basket, smiling brightly. My smile faded, however, when I saw the spatters on his hat and coat, including a red smear on his face.

“Are you all right? Did you fall?” I rushed towards him, thinking to stop any bleeding with my apron.

“Quite all right,” he said. “Only the birds are going mad.”

For a moment I stared at him, believing I misheard him, but then I saw movement in the sky past his shoulder. Birds of all sizes and shapes, flying at odd angles to each other but all heading inland. As I watched two collided, then set at each other with horrific shrieks and bared claws. Feathers drifted down as they fought.

“I’ve never seen anything like it. It’s quite late in the year to be mating, and there are gulls up there. They usually stay close to the shore—” My father suddenly broke off, frowning at the laundry basket. “What are you doing with that laundry?”

“I was looking for a petticoat,” I said quickly. “I cannot find it anywhere.”

He gave me a suspicious look, but I was saved from further inquiry by Mr. Simmons appearing. As he fetched my father a fresh coat, I slipped past him and went out onto the drive. Dozens of birds filled the sky, and save for when their paths provoked a conflict, they were doing so in near silence, as if they needed all their strength to fly. But what were they flying towards—or were they fleeing something? I scanned the horizon: there was not so much as a cloud, not a hint of an incoming storm.

Above me two more birds crossed paths, and the larger one viciously raked the smaller. It tumbled to the ground, then carefully righted itself and began limping forward, still heading unerringly inland.

“Caroline, dear, don’t distress yourself with such sights.” My father took my arm and led me back to the house.

“But what could be causing it?” I asked, still craning my head. “Something has frightened them, something worse than a storm.”

“They were probably startled by an animal—perhaps we have a wolf again. I’ll ask in the village,” he said. “Oh, and I forgot to tell you! I will be stopping at the Fitzroys’ on my way home. I was thinking if Diana spends the season in town again, perhaps you could join her? A stay of some weeks will help you become more comfortable in society, and develop your acquaintanceships further.”

And there were so many replies I wished to make, all at once. The Fitzroys were our closest neighbors, and Diana my oldest friend. Having both lost our mothers early, and without siblings, we had been for a time closer than sisters. The memories of our girlhood, pretending to be the pirates Anne Bonny and Mary Read, or the tragic princess Caroline, still filled me with longing. But the Fitzroys’ finances had flourished where ours had declined, and I took no pleasure in the prospect of marriage. A season with Diana promised only embarrassing shortfalls and uncomfortable encounters.

I wanted to say all these things, and that I had seen far worse than a wounded bird in my life, for had I not seen my own mother die in childbirth? But such was not the speech of a dutiful daughter, and I quailed at the thought of disrupting our affectionate relationship. I was still struggling for words when he kissed me on my forehead and shooed me back inside, as if I was still a little girl. 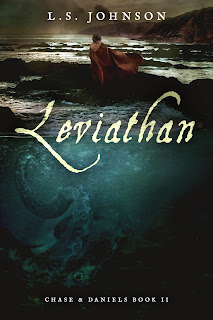 Leviathan
Chase and Daniels
Book Two
L.S. Johnson
Genre: Queer Gothic Romance/Horror
Publisher: Traversing Z Press
Date of Publication: June 15, 2018
ISBN: 978-0998893624
ASIN: B07DJQZ8GM
Number of pages: 185
Word Count: 40k
Cover Artist: Najla Qamber
Book Description:
We will survive this, Caroline.
It has been several months since Harkworth Hall burned, and mere weeks since Joanna Chase came back into Caroline Daniels’ life. But when a stranger arrives in their village and asks to see the damaged bay, they know that word of the creature has spread. With tensions simmering between France and England, they depart in haste for Medby, where Sir Edward’s brother resides. There they hope to discover if Thomas Masterson has stepped into Sir Edward’s shoes, and now wields the monster called Leviathan.
The situation in Medby, however, is far worse than they anticipated. Claiming the French attacked his ships, the younger Masterson seems about to launch an audacious reply. But his true plans are not so straightforward and there is little time for Caroline and Jo to uncover them.
With the threat of war demanding risks in kind, Caroline and Jo must weigh their deepening affection against the greater good … and learn to trust not only their instincts, but their hearts as well. 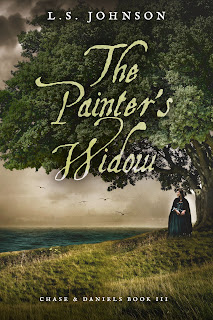 The Painter’s Widow
Chase and Daniels
Book Three
L.S. Johnson
Genre: Queer Gothic Romance/Horror
Publisher: Traversing Z Press
Date of Publication: June 26, 2020
ISBN: 978-0998893655
ASIN: B089QW92YN
Number of pages: 182
Word Count: 40k
Cover Artist: Najla Qamber of Najla Qamber Designs
Book Description:
You know by now what a woman is capable of.
Caroline is home with her father and the woman she loves—but with the Leviathan still unaccounted for, such peace can only be temporary. Soon, the mysterious Mr. Smith is asking for her aid once more: one of the Mastersons’ conspirators has been murdered, and the only clue lies in a painting that was last seen in Medby. Meanwhile, Jo has worries of her own, as her affianced sister wants assurances she cannot give—not without denying her very self.
With her arrival in London marked by a second murder, Caroline finds herself once more drawn into a world she wanted to forget. Aided by old friends and new, she and Jo search for the painter, while staying out of reach of Jo’s sister’s powerful fiancé. But soon they suspect that darker forces are behind the murders, involving not only the painter but his young, pretty wife … and an imaginary land called Arcadia.
As Caroline and Jo struggle to both stop the murders and protect the life they’ve made for themselves, they find a new conspiracy is just beginning … and their choices will come at a price greater than either imagined.
Books2Read     Traversing Z 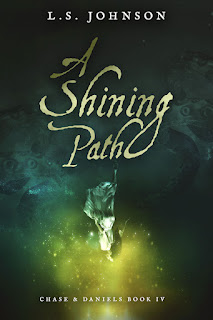 A Shining Path
Chase and Daniels
Book Four
L.S. Johnson
Genre: Queer Gothic Romance/Horror
Publisher: Traversing Z Press
Date of Publication: April 2, 2022
ISBN: 979-8985797213
ASIN: B09SY7GJFH
Number of pages: 198
Word Count: 47k
Cover Artist: Najla Qamber Designs
Book Description:
There is so much evil in the world … but this one thing we can make right.
The island colony of Arcadia promises hope, prosperity, and tolerance to all who settle there … and asks only that they protect it with their lives. For Caroline and Jo, however, this opportunity could spell disaster, for the island’s owner is none other than Mrs. Masterson. Is her invitation an honest offer, or a deadly lure? And what relation does this Arcadia have to the one in the widow’s paintings—a place accessible only by magic, and the last known location of the monster called Leviathan?
To uncover the truth, Caroline and Jo set out for Arcadia, only to find that each of their fellow travelers has personal reasons for accepting Mrs. Masterson’s offer. Caught between this impromptu army and the might of England and France, knowing at any moment the Leviathan might reappear, they race to stave off the impending violence.
But the further they get, the more they realize that Mrs. Masterson has set herself, and the Leviathan, against a far greater opponent than any one nation. Her success will mean catastrophe for millions, but stopping her may cost Caroline and Jo what they hold most dear: each other.
Amazon     Kobo     Books2Read     Traversing Z 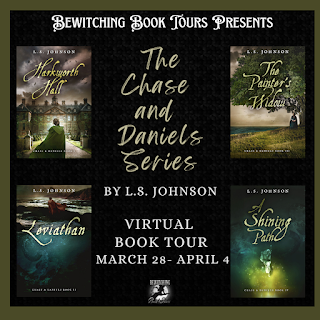