How can Blake and Sako get past mutual contempt and old wounds to find their perfect happy ending?

When winger Blake Conti signs with the national champion Bethesda Barracudas, he isn’t looking to get involved with anyone. Still bruised from an old relationship, his focus is on playing hockey. But when one of his new teammates turns out to be the hottest man he’s ever met, Blake wonders if he should reconsider his aversion to romance.

Mark Sakamoto—Sako—one of the Barracudas’ rising young stars, is immediately smitten with Blake. Deeply closeted because he fears revealing his sexuality to his family, Sako resists his attraction by using scorn and insults to push Blake away. Hurt by Sako’s behavior, Blake reacts in kind, and the two men are soon at war.

Just as their fighting threatens to disrupt the team, the unexpected happens, and Sako and Blake bond over a silly prank. Their newfound camaraderie soon develops into a relationship, and the men become inseparable. With “ice in public, heat in private” as their motto, they keep things secret, but as they fall for each other, Sako knows he has to tell his family the truth. He dreads their reaction, but it’s the only way he and Blake can live happily ever after.

The locker room was empty when I got back there, and I dressed quickly. I was standing in front of my stall, buttoning my shirt, when someone called my name. Looking around, I was surprised to see Sako standing in the doorway. His hair was a mess, his face was sweaty, and his eyes were wide. The tank top he had on was soaked, and the way it stuck to his torso emphasized the hard muscle underneath.

I looked away, determined not to stare. “I didn’t know you were still here. Been in the gym?” I slipped on my loafers.

“Yeah.” His voice was low and husky. “I needed to ride the bike and clear my head.”

“Did it work?” Unable to resist, I turned my gaze back on him.

“No.” His hands were at his sides, and he opened and closed them repeatedly while his eyes darted around the room. “Anybody else still here?”

Instead of answering, he rushed toward me and grabbed my hand. “Come here.”

“Come with me.” He tugged harder, almost pulling me off my feet. I was too shocked to say anything as he dragged me into a small room used to store spare equipment and closed the door. Meager light filtered in through ventilation panels, and after he turned to face me, I looked into dangerous dark eyes while his thick musk filled the air.

“Yes.” He leaned forward and brushed his lips against mine before backing his head away to look at me again.

I was too shocked to move. “Mark?”

“What’s going on?” I whispered.

He wrapped his arms around me, and my legs turned to jelly. “What the hell are you doing? This isn’t—”

He shut me up by pressing his mouth against mine. I wanted to tear away, to yell at him to go to hell, but I wrapped my arms around him and kissed him back instead. I didn’t understand what the fuck I was doing. Sako and I weren’t even friends. In fact, we were probably enemies. We certainly weren’t the kind of people who kissed each other.

Pulling away from my lips, he licked the corners of my mouth. Even as my brain cried foul, I hugged him tighter, not wanting the moment to end. He kissed me again, but when his tongue probed against my lips, I pressed them together. I didn’t want Sako’s tongue in my mouth. But if that was true, why did I relax enough for him to sneak inside? I may have hated the bastard, but the thrill of him possessing me that way shook my world.

I deepened the kiss, and my tongue dueled his until I found my way inside. His smell, sweaty and sharp with need, ignited an explosion of desire, and I shoved him into a wall of boxes stacked against the storage lockers. Trapping his hands, I probed every corner of his mouth while he moaned. Time stood still until he grunted and jerked his hands free. He swiveled me around like a rag doll until I was the one pinned against the boxes with my hands clamped under his. Fire shot through me when he moved his hips against mine and our cocks ground together.

“Stop!” I yelled. “I hate you!” Just as quickly, I called out again, “Don’t stop! Please!” He didn’t react at all, and I realized the voice had been in my head. We were locked in a kiss that had my mind doing somersaults, and I wondered if we’d keep playing bump-and-grind until we both came in our pants. 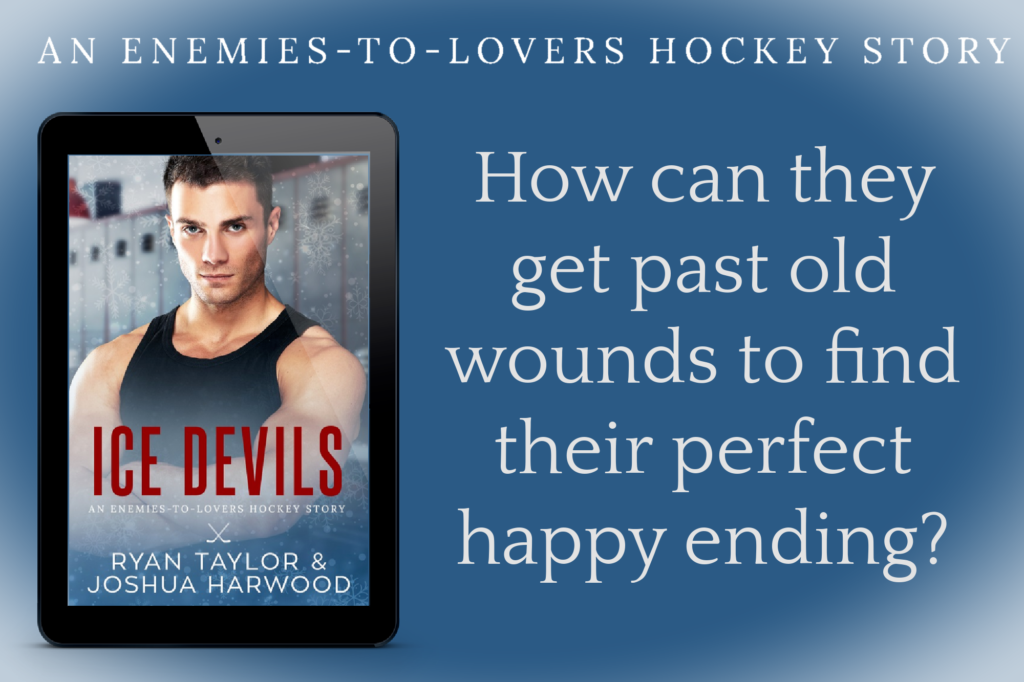 Ryan Taylor and Joshua Harwood met in law school and were married in 2017. They live in a suburb of Washington, DC, and share their home with a big, cuddly German shepherd. Ryan and Josh love to travel, and hockey is practically a religion in their house. Ryan also enjoys swimming, and Josh likes to putter in the garden whenever he can. They began writing to celebrate the romance they were so lucky to find with each other, and the sharing soon developed into a passion for telling stories about love between out and proud men. Ryan and Josh love to hear from readers anytime.