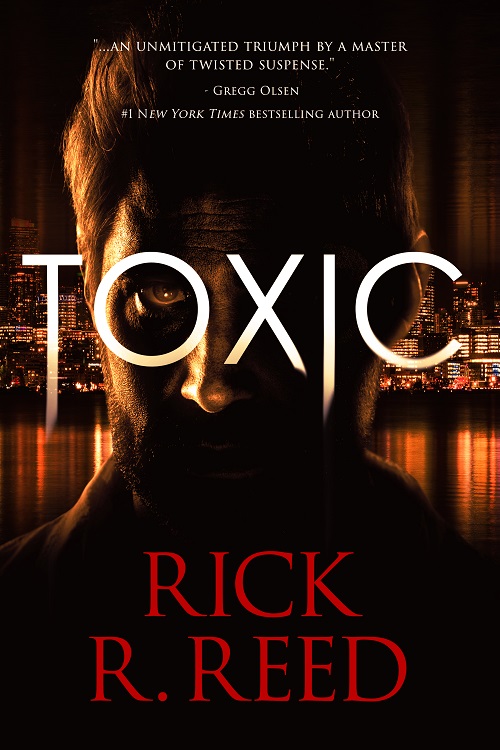 Connor Ryman thought he had it all—a successful career as a mystery novelist, a condo with stunning views of Seattle’s Lake Union, a supportive and long-term partner, Steve, and a loving daughter, Miranda, who was following in her father’s creative footsteps.

It all went bad when Steve left the family suddenly. Jilted and heartbroken, Connor begins to search for love online. So long off the market, he enlists his daughter’s help in crafting a dating profile.

His prayers are answered when Trey Goodall, smart and handsome, answers his ad. He’s witty, urbane, a wealthy attorney, and his sex appeal is off the charts. But he’s a liar, a monster under a pretty mask. Miranda sees through the red flags and senses something very wrong beneath the façade.

Can she convince her father to save himself before it’s too late? Or will Trey, a master manipulator with a very tainted history, play upon Connor’s innocence to ensnare him in a web of deceit, intrigue, and, ultimately, murder? 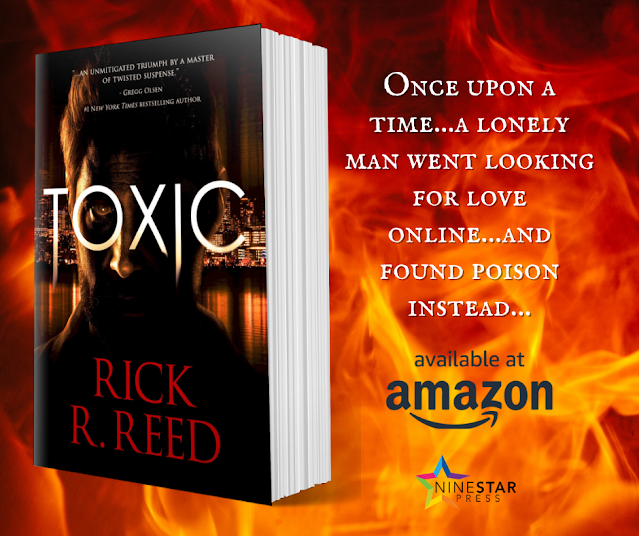 “I know who you are and I saw what you did.”

The voice on the phone was tinged with acid, yet came out a little shaky and short of breath.

Despite the fear and acrimony in the voice, Trey Goodall hoped that the caller, a man named Jimmy Dale, was making a feeble joke, a lame reference to an old black-and-white thriller from the ’60s. Trey wasn’t ready for his game to be over.

“That’s funny, Jim. Did you watch that movie when you were a kid too? Back in the days of black-and-white TVs and Chiller Theater?”

There’s something delicious about when they cry.

Despite the delight in Jimmy’s pain, Trey feared it might come to this. This one, he knew, was too smart to stay in the dark for long. Sooner or later, Trey always got found out. He had a trail of broken hearts—and shattered bank accounts—behind him to prove it. Still, later was better because he could usually walk away with a little something in his pocket.

“Then what are you trying to be, dollface?”

Trey interrupted. “Another movie reference! Bravo. When do I get a chance to play?”

His question, predictably, was answered with silence on the other end. Trey pressed the phone closer to his ear, listening for further telltale signs of tears, of trauma, of despair. Not that his aim was to instigate any of those emotions, but Trey was like a dog—any attention was good.

Finally, Jimmy spoke. “I don’t want to see or hear from you ever again.”

“Aw, you’re breaking my heart here.” Trey threw open the door to his motel room on Aurora Avenue. Outside, in the waning purple-gray light of dusk, a couple fought, seemingly to the death, in the litter-strewn parking lot. The woman had bleached blonde hair, a handful of which her companion had clutched in one hand. She wore an old flannel shirt, the sleeves cut off. It had come open and her dirty bra showed. The guy was a brute, big and hairy, and obviously had never learned how to treat a lady.

A kid of about eighteen, at most, sat on the curb in front of a parked rusted-out SUV. He was wearing a hoodie, ripped jeans, and a pair of work boots. His head was shaved and this, combined with his whitish pallor and skin-and-bones physique, made him look like a concentration camp survivor. A rheumy, bloodshot gaze moved dully over to Trey. The kid made a lame attempt to hide the meth pipe in his hand.

Trey slammed the door. He deserved better than this sordid dump. He should have been living in a luxury condo downtown overlooking Puget Sound, or maybe a house on Bainbridge Island with expansive mountain and water views.

Instead, here he was on Seattle’s Aurora Avenue, in one of a cluster of rundown motels where the clientele consisted of addicts, prostitutes, and those seeking to party with a capital T in one of the rooms.

He didn’t deserve enduring the chance of bedbugs or crabs. He didn’t like living amid cigarette-burned carpets and mold and hair decorating the bathroom fixtures.

“Stop.” Jimmy sucked in some more air. The guy’s gonna need an asthma inhaler soon. But Trey supposed he was trying to gain a measure of control. Jimmy was wounded, and of course he wanted to hide it, but he couldn’t. “Your heart can’t be breaking because you haven’t got one to break.”

“Ouch.” Trey chuckled, as though to demonstrate the insult was simply water off a duck’s back.

Trey would never let on, but the reference cut like a knife to his very real heart, which was a broken thing.

In his mind, a vision arose. Trey chased it away as quickly as it appeared—but there it was: a vision of his mom, back in Trey’s old hometown of Wellsville, Ohio, burning him with her cigarette and laughing as Trey tried to be brave, tried desperately not to scream or wince because he knew if he showed his pain, his fear, it would only make things worse. Now it was his turn to try to buck up, be brave. “Things not working out the way you expected?”

There was no mirth in Jimmy’s laugh. Trey wanted to ask which was better—bitter laughter or abject tears. But he kept quiet and waited. He’d been through this before. Caught. Discarded.

There was always another sucker in the wings.

“What I expected…” Jimmy trailed off and started again. “What I expected was maybe a relationship. I’m forty-seven years old, Trey. I’ve spent my whole life pushing love away so I could build my career. Now I have a thriving law practice and make more money than I really know what to do with. But you know all that. You knew all that, I figure, before we even met, when you were researching me. I know you don’t have it in you to feel compassion or empathy, but all the money and success in the world doesn’t change the fact that I come home every night to a professionally decorated condominium in the clouds. Alone. Wishing I’d spent more time seeking love instead of that almighty dollar.” He drew in a breath that sounded like a shudder. “Ah, what do you care? You wanted my money. You’re not alone, but you were greedier and sneakier than most.”

Jimmy stopped and Trey listened again for some sign. Would it be worth it to try to save things? Maybe woo Jimmy with the old lines—this was all a misunderstanding. I really love you, man. I started off with bad intentions, but then you caught me. Can we start over? Sometimes crap like that worked. Trey was smart enough, and experienced enough, to know it wouldn’t here.

“Was any of it true?” Jimmy wondered.

Trey was getting bored. He had no use for this man with whom he’d shared so many recent days and nights. He was worthless now that he’d exposed Trey for who he really was. What Jimmy didn’t know, and didn’t need to know, was that what he’d discovered about Trey was only the tip of the iceberg.

It’s time to move on.

Trey glanced in the mirror over the bathroom sink and nodded approvingly. He still had it. Pushing fifty, but looking at least a decade younger, he was gorgeous. Black wavy hair, ice-blue eyes, full lips, a body taut and packed with muscle. He could always dazzle, and all the magic hadn’t escaped.

There’d be someone else.

And with that someone else, he might hit that elusive jackpot.

The laptop was already open on the desk. And there were eleven new messages.

For once, Trey might as well tell the truth. “No, kid. None of it was true. You’re pathetic. Weak. I feel sorry for you, more than anything else.” He said the words casually, as though they were discussing the weather or how the Seahawks were faring this season. “You’re a fool. A fool for love.” Trey chuckled.

And that broke Jimmy. He began to sob harder now, the grief confirmed and kicking its way to the surface.

Trey listened as the sobbing grew in volume and agony. This is a drag, a bore. He stared longingly at the door, wishing this would be over. How long did he have to listen anyway? Just to be polite? He cut to the quick. “You’ve been played,” Trey said softly. “Get over it.”

He hung up. The computer’s glow reminded him that it was time to find someone else. The right one. A chime alerted him he had yet another message.

But there would be time to attend to that in the morning. Time also for reading. He glanced down at his nightstand. A mystery novel, Cookie Cutter by Alfred Knox, lay there in its mass market paperback edition. It had a stark white cover with only an illustration of a heart-shaped cookie cutter which dripped blood into the crimson title. Below it, a stack of old magazines with articles about Knox, who lived only a few miles south.

Right now, though, Trey needed a little oblivion. He crossed the room and opened the door. The kid with the meth pipe still sat out there on the curb. He didn’t even bother to hide his glass pipe now.

Trey cast his most winning smile. “Wanna come inside?” He opened the door wider, stepping back and confidently waiting as the kid stood. 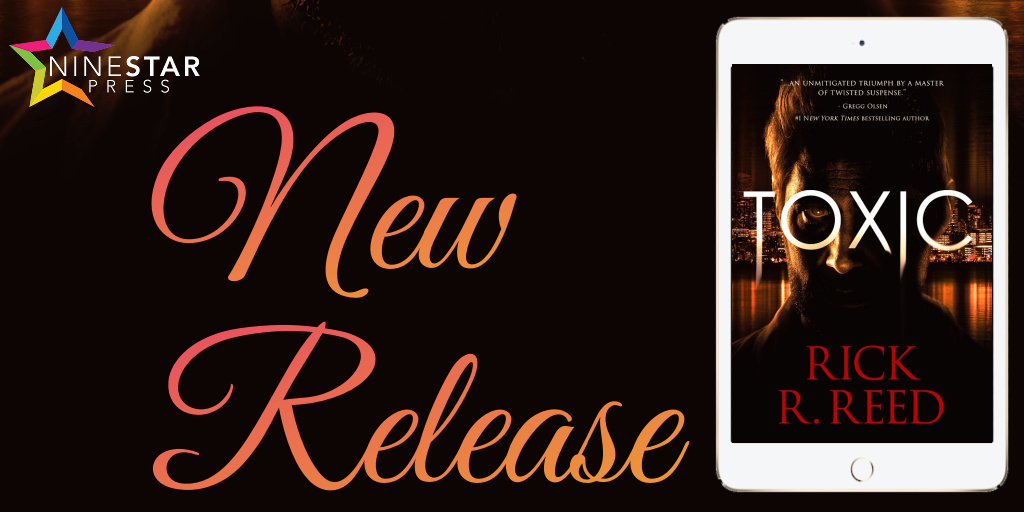 Rick R. Reed is an award-winning and bestselling author of more than fifty works of published fiction. He is a Lambda Literary Award finalist. Entertainment Weekly has described his work as “heartrending and sensitive.” Lambda Literary has called him: “A writer that doesn’t disappoint…” Find him at www.rickrreedreality.blogspot.com. Rick lives in Palm Springs, CA, with his husband, Bruce, and their fierce Chihuahua/Shiba Inu mix, Kodi.