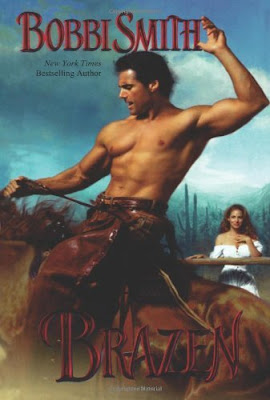 Casey Turner could rope and ride like any man, and she scandalized folks by wearing boys’ clothes, but when she strode down the streets of Hark Luck, Texas, nobody took her for anything but a beautiful woman. Working alongside her pa to keep the bank from foreclosing on the Bar T, she had no time for the frivolous things of life, no time for romance. But all that was about to change…

Michael Donovan had had a burr under his saddle about Casey for years. Ever since she caught him skinny-dipping and stole his clothes, making him the laughingstock of the whole Circle D. The last thing he wanted was to be forced into marrying her, but it looked like he had no choice if he wanted to safeguard the future of the Donovan ranch. Their families had been bitter enemies for years, but now his parents were urging Michael to court Casey, to treat her like a lady. He’d do his darndest, but he could never let on that underneath her pretty new dresses Casey was as wild as ever, and in his arms she was positively…BRAZEN.

A wild plan began to form in Casey’s mind as she stared at Michael’s clothes. She drew her rifle and then urged her mount closer to the water’s edge, keeping far enough back to be out of Michael’s reach in case he tried to come after her.

“Hey, Donovan!” she cried out.

Michael was startled when he turned to find himself staring up at Casey Turner.

“What are you doing here?” he demanded, moving into deeper water to keep himself shielded from her view.

“I’m checking for strays—but I found you.” She was enjoying his discomfort.

“Just keep on riding,” he ordered, wanting her gone, the sooner the better. He knew she was trouble.

“I don’t have to do anything you tell me to do.”

His scowl deepened. He wasn’t sure what she was up to, but he didn’t trust her.

A sense of power filled Casey. She had him right where she wanted him. “So, how’s the water?”

She urged her mount across the low-running river.

“Why are you heading for Donovan land?” he called. “There aren’t any strays around here.”

Casey didn’t answer. She just rode to the tree where his clothes were hanging and yanked them down, then held them up for him to see. “I didn’t find any strays, but I found these. I think I’ll take them with me!”

“You can’t take my clothes!”

“Oh, yes, I can. You said I needed new clothes when we were in town, so I’ll just take yours!”

“You do and you’ll regret it.” He started to charge through the water toward her.

Casey lifted her rifle for him to see. “Stay right there, Donovan. Enjoy your swim.”

Casey was still laughing as she rode to where his horse was tied up. She freed his mount, then slapped it on the rump to chase it off. She crossed back to the Turner side and galloped away. She did not look back.

Michael climbed out of the water and swore loudly in humiliation and frustration. He wanted to chase her down and teach her a lesson, but it wasn’t going to happen right now. Silently, he vowed that one day she would pay for what she’d done.

But first, he had to figure out how he was going to get home. He spotted his boots nearby and was grateful for that much. What he was going to do next, he wasn’t sure. He only hoped his horse would return to him on his own. If not…

Bobbi Smith will be awarding $10 Amazon or Barnes and Noble GC to a randomly drawn winner via rafflecopter during the tour.