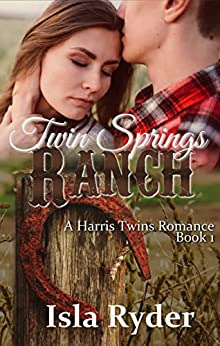 Braxton left and never looked back - until now. His father's death makes him half-owner of a nearly bankrupt Twin Springs Ranch, and he returns to find not only his twin brother in need of help, but a woman who reminds him that the ranch is more than just bad memories.

Sydney knows two things; she will do anything to save Twin Springs, and she hates Braxton Harris. Her guard is up and she does everything she can to ignore the way Brax makes her feel. She isn't going to fall for the guy who doesn't care if the ranch is sold or succeeds, since he'll be leaving either way. Right?

Can they come together to save Twin Springs, and is it possible for them to have a future?

Momma Says: 4 stars⭐⭐⭐⭐
Sometimes we get everything we hope for. And sometimes we get what we didn't know we needed. And that sums up the slow-burn romance between Brax and Sydney. Brax wants nothing more than to get rid of his father's ranch and get back to his neatly ordered life. Sydney and her love for Twin Springs Ranch isn't a part of that plan. Sydney doesn't like anything about what Brax represents, but her reaction to him suggests something else. Sydney is determined to paint Brax as the bad guy no matter what he does, and he's just the right mix of grumpy and lovable. These two have good chemistry whether they admit it or not, and you can't help but want them to work out even when they're busy pushing against each other. Enemies to lovers is one of my favorite romance tropes, and well... cowboys, right? There aren't a lot of secondary characters in this quick read, at least not a lot that we need to get to know. There is a reason for that, but I don't want to give any spoilers. The ones that are included are developed and the whole story is engaging and entertaining. As I mentioned earlier, this is a slow-burn romance, but the story is a quick read that I finished in an afternoon. I like that it's a well-rounded story and it gave me a chance to get lost in it for a few hours.
✱✱✱✱✱ 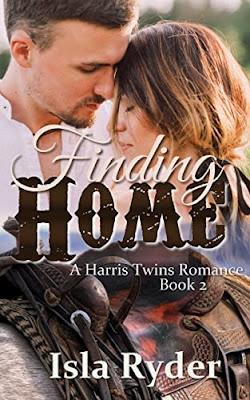 Twin Springs Ranch is back on track, and AJ heads to the local auction to find a horse to add to the stable. Amid the bidding, he finds not only a perfect horse, but a woman who feels like an old friend even though they just met.

Lilyana is devastated that her job at Mr. Heward’s ranch is coming to an end and that the horses she loves are being sold. When she meets the man who bought Chance, he invites her out to his ranch, and she accepts, even if she’s unsure if it is a date or not.

Lilyana helps AJ through his grief and, after nearly losing the ranch to a wildfire, shows him what the future of the ranch could be like. Could there be a permanent place at Twin Springs for her? Was she lucky enough to not only find the man of her dreams, but the job of her dreams, too?

Momma Says: 4 stars⭐⭐⭐⭐
It's a sweet romance for AJ and Lilyana. I met AJ in the first Harris Twins Romance, and I was struck by his kind heart. Even as I was rooting for Brax and Sydney, I was looking forward to AJ's love story. I just knew it would be good, and Isla Ryder didn't disappoint. To quote the author, this is a "sweet equestrian romance." I've read a lot of cowboy romances, but I don't recall seeing equestrian romance as a subgenre. Nevertheless, it works because the horses are pretty important to the characters, and they've shaped who the characters are in their own way. Plus, a horse is responsible for bringing AJ and Lilyana into each other's orbit. These characters are so well-suited. Lilyana is as good-hearted as AJ, and they both want nothing more than to spend time with the horses. Well, nothing more than each other, then spending time with the horses. This one is a quick read as well, and I liked the first well enough to just keep on reading. So, between books one and two, I spent an afternoon and evening on Twin Springs Ranch. It was a nice little escape from everyday stresses.