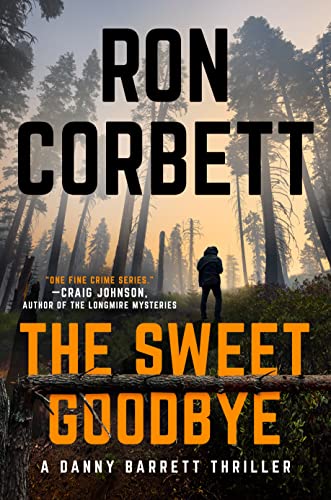 In this thrilling new series from Edgar®-nominated author Ron Corbett, the most dangerous predator in the Maine wilderness walks on two feet—and it is Danny Barrett's job to bring him down.Something is not right in the North Maine Woods. A small family-run lumber company should not have more than two hundred million unaccountable dollars on their books. Money like that comes from moving something other than wood across the border. The first agent the FBI sent undercover was their best man—sure to get the answers that were needed. He was dead within a month.  Now, Danny Barrett is taking his place. Before he was a cop, Danny grew up in the woods of Northern Michigan. He is the only chance the feds have of getting answers, but how many more will have to die first?

Momma Says: 3 stars⭐⭐⭐
I love crime dramas/thrillers, even more so when I get a series so I can get invested in the characters and their cases. It's kind of like visiting a friend every now and then. The Sweet Goodbye introduces undercover FBI agent Danny Barrett. Danny is certainly not a by the book man, but he does have a good sense of right and wrong - his idea of the line between the two may not jive with his fellow agents, and he may cross that line from time to time, but he has a sense of honor.
Ron Corbett knows how to paint a picture and draw you into the setting. His descriptions are vivid and detailed. That part kind of goes both ways for me. There's a line between just enough and too much, and I feel like Corbett crosses it a little too often. I found my mind wandering at times when some descriptions went on a little too long when what I wanted was more of Danny. I really enjoyed Danny's point of view. There's almost a melancholy feeling at times, and I liked him, flaws and all.
This first book in Corbett's Danny Barrett series turned out to be more crime drama than thriller, but it held my interest and I look forward to seeing what's next for Danny Barrett.