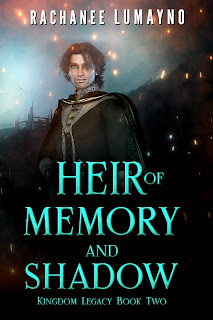 Heir of Memory and Shadow
Kingdom Legacy Series
Book Two
Rachanee Lumayno
Genre: Fantasy/ YA Fantasy
Publisher: Miss Lana Press
Date of Publication: May 2022
ISBN: 9781736181126
Number of pages: 338
Word Count: 72, 197
Cover Artist: Fiona Jayde
Book Description:
Kaernan Asthore may be one of the most gifted Seekers in the kingdom of Orchwell, but he wants nothing more than to be rid of his gift: the ability to find lost loves, which often ends in heartbreak.
So when Lady Adallia Pahame hires him to find her own lost love, Kaernan assumes it will be an easy, routine commission.
But when the mystery surrounding his new traveling companion causes them to run afoul of an infamous gang of bounty hunters, Kaernan realizes this is one commission he might not return from. Will he be able to uncover the truth in time to save his friends — and himself?
Heir of Memory and Shadow is the second book in the Kingdom Legacy series.

I bow over the lovely young woman’s outstretched hand as I agree to assist her. As we ride together, I see the sunlight halo behind her head, hearing her sweet laughter as she smiles hopefully at me, believing the world is full of possibility.

But, unfortunately, her hope is misplaced.

I watch as her face crumples in tears. Not the restrained, dignified sniffles that I would have expected from someone of her standing. Instead, the tears are great gulping sobs that rack her thin frame, threatening to break her in two.

Just as her heart was breaking.

I had been taught to remain neutral, but it is difficult to see to see the poor young lady react so violently to the news. But what had she honestly expected?

I try to calm her, to comfort her, even though it isn’t my place nor my business. I hold her firmly by the shoulders, speaking in a low, soothing voice as if she is an easily spooked animal.

The wild look in her eyes begins to settle. The tears begin to slow.

I breathe easier. It will be all right now.

Then, without warning, her hand shoots out toward me. I instinctively recoil, expecting to feel the sting of a slap. Instead, she grabs the hilt of the dagger sheathed at my belt. In one swift motion, she draws the knife out and plunges it into her heart. Her eyes never leave mine as the light fades from them.

Or, at least, I think I do. All I know is, my mouth is gaping open in shock as she falls gracelessly into my outstretched arms. Her blood is everywhere. On my hands, my arms, splashed all over the front of my shirt. Pooling on the floor beneath her crumpled body. Her now sightless eyes are still fixed on me.

Accusing me, forever, that I could have prevented this needless death.

I came out of the magically-induced memory doubled over, gasping for air, even though I wasn’t bound by enchantment or by physical means.

No, I was just bound to the lady Rosemary through my memories of my failed commission. “Thank you for allowing the Council to see that once more,” a deep, gravelly voice above me said. “I know that isn’t easy for you to relive, over and over.”

The voice recalled me to where I was: in my home country of Orchwell, standing before the kingdom’s other governing body, the Council of Seekers, on day ten of what seemed like a never-ending trial.

Because my commission had ended so brutally, the Council had called me before them, repeatedly going over the events that led to Rosemary’s death. This was the fifth time I had had to relive the memories of what had occurred.

While the memories were painful, they were nothing compared to the possible futures before me. Depending on the Council’s ruling, I could be stripped of my Seeker ability, which at best meant I would lose my livelihood and at worst meant I would go insane. Or they could even sentence me to death.

I didn’t know which was the better outcome.

My breathing now under control, I looked up to regard the seated members of the Council of Seekers. Pellham Ravenwood, head of the seven-person Council, regarded me from his place at the center of the raised stand where he was flanked on both sides by the other council members. I recognized some of their faces: elderly Madame Kenestra, her white hair piled high on her head as she turned her shrewd brown eyes on me; the former knight Sir Lantley, a lean, athletic man with silver-streaked black hair; and Lord Olivera, the queen’s cousin, a bulky, solidly-built man with long blond hair that he often wore tied back from his face. He was at least a good five or ten years younger than his peers on the Council.

Orchwell’s ruling king and queen were the ultimate authority in our country, but they tended to delegate many of the day-to-day affairs of governing to the Council of Seekers. It made sense; Orchwell’s royal family was, by design, one of the few families of nobility that did not have the Seeker ability running through their veins. Or, if any of the royals did, it was often an extremely weak ability, akin to a minor magical skill. If anyone in the direct line of succession showed a strong aptitude for seeking, they weren't eligible to inherit the throne. There were too many headaches as a Seeker — and in my world, heartaches — to wish upon a future king or queen. Orchwell needed their rulers at home in the kingdom, fully able to focus on their duties.

Which was another reason why the Council of Seekers existed.

Several of those on the Council were members of the royal family who had been ineligible for succession. The rest were former Seekers who had since passed on their duties to other family members, but still wanted to serve the kingdom in some way. Members of the Council weren’t paid, but would occasionally receive monetary gifts from the Crown.

Pellham Ravenwood was a rare combination: as the king’s fourth younger brother with strong Seeker abilities, he had actually been allowed to pursue his Seeker career since he was never a strong contender for the Orchwell throne. Being a part of both worlds gave him remarkable insight and made him a formidable leader, which helped him earn the position as Head of the Council.

Pellham turned to Lord Olivera. “Well, as you were the one who requested Kaernan go over his commission yet again, are you satisfied with what you saw?”

Lord Olivera tapped his chin thoughtfully. He was wearing an extravagant wide-brimmed red hat with a silver feather; as he nodded, the feather nodded in time with him. “It was thorough, to be sure, but it didn’t give us any new information. It would be nice to have another perspective on the situation.”

I ground my teeth, pressing my lips into a thin line to stop myself from blurting my thoughts. Of course my story, rehashed multiple times, wouldn’t have given the Council new insights. The only person who could give the Council another perspective is dead.

While I hadn’t expected much sympathy from the Council during my trial, I found I really disliked Lord Olivera. The man seemed to enjoy torturing me, asking the same questions repeatedly, making me relive the commission over and over before the Council, and casting doubt on every move or motive I had during Rosemary’s commission. I already had recurring nightmares about it, and had barely slept for the last four months since returning home with the lady’s death on my hands.

Besides my nightmares and insomnia, I was constantly on edge from not exercising my Seeker ability. Seekers had to use their gifts regularly or potentially go mad, and I had been denying my gift for several months. And pre-trial, when I had to undergo the Council’s intense process of magically sealing witnesses from talking outside of the courtroom, I had barely recovered from it.

So I was definitely not in good physical or mental shape right now. And Lord Olivera’s “attention to detail” — as he called it, although I would have termed it otherwise — wasn’t helping me. I firmly believed that the Council would have come to a decision about my fate much sooner if he hadn’t been present.

“Pause the hearing here, and meet again in ten minutes after we get some refreshments.”

“I, for one, agree with Madame Kenestra.” Sir Lantley also cut off whatever Lord Olivera was going to say. “A short break would do wonders to clear my head.”

“Sir Lantley, you agree with me? Now that is a first! Pellham, did you hear that? Have the Council secretary note this day, for it truly is a momentous occasion: Sir Lantley agrees with me.” The twinkle in Madame Kenestra’s eyes as Lord Olivera’s face grew mottled red with rage told me she knew exactly what she was doing. I almost felt sorry for Lord Olivera.

Pellham Ravenwood sighed. After spending a few days with the Council, I had a vague idea of what he had to put up with on a daily basis. I ducked my head so the Council members wouldn’t see my smirk.

“All right, then, the majority has it. We will take a break and reconvene in, oh, about ten minutes.”

Pellham looked at me, then, really taking in my haunted eyes and drooping shoulders.

“And then, we will decide on the fate of Kaernan Asthore.” 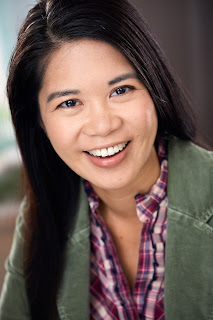 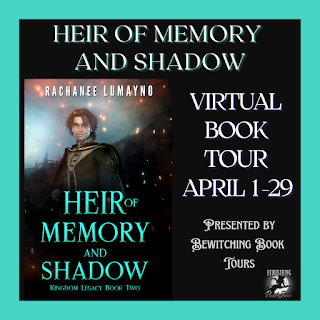