Life's Too Short For White Walls Tour and Giveaway 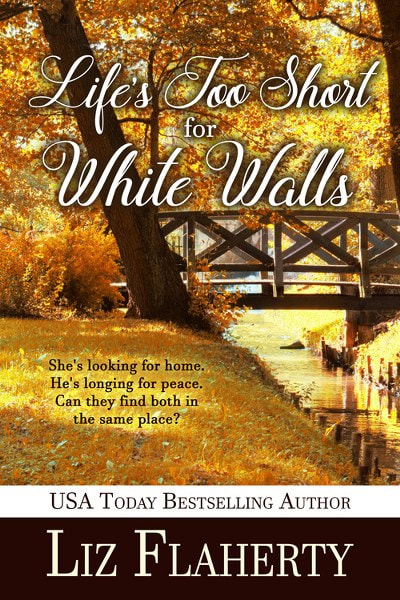 Life's Too Short for White Walls

Still reeling from her divorce, Joss Murphy flees to Banjo Bend, Kentucky, where she'd been safe and happy as a child. The family farm is now a campground. Weary and discouraged, she talks owner Ezra McIntire into renting her a not-quite-ready cabin.
With PTSD keeping him company, Ez thrives on the seclusion of the campground. The redhead in Cabin Three adds suggestions to his improvement plans, urging color and vibrancy where there was none.

Neither is looking for love, yet the attraction they share is undeniable. Can the comfort of campfires, hayrides, and sweet kisses bring these two lost souls together?

Ez felt as if he’d lost something he hadn’t quite had. Granted, the little brick house on Dixon Avenue was only a couple of miles away from the campground and he couldn’t blame Joss for wanting a place she wasn’t going to have to move out of every time someone wanted to spend a weekend. But he liked stopping in to see her wherever she was working. He could still do that, he guessed, but it would be different once she moved. She probably wouldn’t appear at every event that took place at the pavilion or join him on a last walk around the campground before calling it a night.

“It’s okay if I stay in the farmhouse until after Thanksgiving, isn’t it?” she asked.

They were in Cabin Ten, replacing the first of the bathroom vanities that he was certain the previous owner had built from cardboard boxes. “Of course, it is. That’s where you’re having your reunion.” Under the sink, he got a face-ful of water and cursed mildly. “Hand me the—” A dry shop towel appeared as if by magic. “Thank you.”

“You’re welcome. The nice thing is that Thanksgiving weekend will be a test run of how the house will operate as a B & B. Of course, there won’t be any little kids staying there to stop up the toilets or jump off the porch roof wearing towels for capes, but—”

“What?” He pushed himself out from under the sink. “What are you talking about?”

She looked confused. “Didn’t you ever? Jump off a porch roof, I mean?”

“Only our own, and only until I got caught.” That had been a painful experience. He wondered if Silas… “I guess that’s why I needed more insurance.” He wiped the rest of the water from his face and squinted at her. “Do you really think people will let their kids do that?”

“I suppose some will. I never let my kids do a lot of things, but as soon as I turned my back, they did them anyway. I kind of liked them that way.” She grinned at him. “And I have a sneaking suspicion you were the same way.”

He remembered, with an unexpected rush of pleasure, that he had been, and so had his brother. “Maybe,” he said, “we should put one of those jungle gym things in the backyard of the house.”

“No need. The one up near the pavilion is great and close enough.” She put the tools he’d used back in the box and set about cleaning the new vanity. “These will look nice. Much better than what was there.”

He nodded. “You’ll end up having to touch up the paint around them. I’m sorry about that. I should have thought of it before.”

They cleaned up after themselves and left the cabin. They loaded the toolbox into the back of the Gator and drove to the next one. “Why don’t you plan to stay until the first of the year if no one rents the farmhouse?” he suggested. “That’ll give you an even day with your rent and give you time to finish un-whiting every room in the house you’re moving into.”

“You’re going to keep working here, aren’t you?” He knew he asked the question awkwardly, but he needed to know. “You don’t have to, but you and Margaret and Wil make a really good winter crew. Plus Jed will be here weekends.”

She looked pleased, and he was hard put not to sigh with relief and yell, “Yes!”

“Do you want some help painting your house?” She was still putting in quite a few hours at the campground. She worked fast, but as small as the brick house she’d rented was, there were a lot of nooks and crannies in it.

“Yes.” She beamed at him. “I’m having a painting party Thursday. I’d love to have you come. Pizza and beer provided.”

Oh, a party. Not his kind of thing. Definitely not in so confined of a space. Maybe he could…well, no, he couldn’t. He’d offered and he could live with one day of socializing. “Do I see a scaffold and some ceilings in my future?”

“Oh, I do hope so.” She walked ahead of him to the cabin, and he watched her, admiring how well she filled out a pair of jeans and a campgrounds sweatshirt. At the door of the cabin, she turned. “Are you coming, or is installing vanities part of my job description now?”

“You never can tell. Could be.” He stepped onto the porch and put his arm around her as he unlocked the door. He hadn’t really meant to, but she was right there and smelled good.

He liked her more than was good for him, that was for dang sure. He was relieved she was staying. That was sure, too. 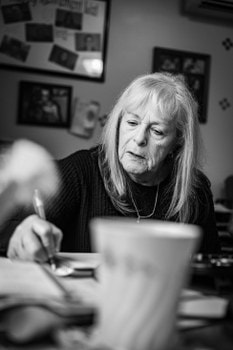 Retired from the post office, Liz Flaherty spends non-writing time sewing, traveling, and doing whatever else she wants to. She and her husband Duane live in the old farmhouse in North Central Indiana they moved to in 1977. They’ve talked about moving, but really…40-plus years’ worth of stuff? It’s not happening. It would require removing old baseball trophies from the attic and dusting the pictures of the Magnificent Seven, their grandchildren. 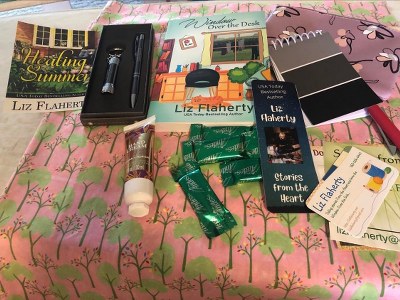 Win a Swag Pack or