Four races with powers dictated by the seasons seek balance and prosperity. However, life instinctively primes itself for survival, and when one race commands the touch of death, all others fall in line. Tyranny plagues Azure as an immortal ruler governs the knowledge of the seasons and those wielding its power.

Four young protagonists, Stone, Jaymes, Goose, and Astor, each navigate their way to escape his shadow and reclaim their freedom. Simple ambitions for young souls. But little did they know, they would uncover the secrets the realm is built upon, and the unique talents they each carry. Their ignorance allows the knowledge of the seasons to escape into the world around them little by little, and with it, a power loosing anarchy upon the realm. A power most aren’t worthy of wielding. It is up to Stone and his companions to tame that power and reclaim the balance. 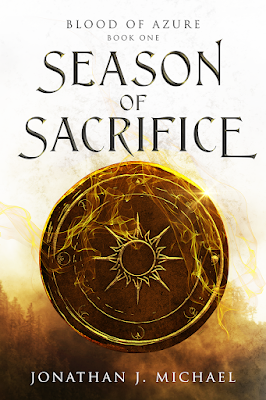 Courage is for the bold. It is not for Stone McLarin. He’s been in hiding for four seasons after being orphaned by the Taoiseach. He doesn’t care for the heroic antics of avenging his parent’s death or securing his freedom. He only desires one thing—to protect his sister’s life.

This proves challenging when his sister, Jaymes, possesses a rivaling power of decay to that of the tyrant ruler’s. She’s a threat to his dominance, and there will be no escaping his shadow.

When the Taoiseach manipulates his way into Jaymes’s life and steals her away, Stone has no choice but to follow. He must venture into the heart of the tyrant’s domain and figure out how to penetrate the impenetrable. And if he succeeds there, he will have to slay the most powerful man in Azure.

In a world ruled by decay, what chance does life stand?

Season of Sacrifice is part one of the Blood of Azure series—an epic fantasy full of grim encounters, heroic adventures, unique magic, and a captivating world to explore.

The four men are at a standstill with the monstrous fish as it splashes and rolls in the water. The captain, first mate, and second mate all look tense as they rush over to the other boom on port side. They raise it in no time and ready another line. Except this one doesn’t have a hook. They tie the end of the line into a slip-knot and throw it into the water where the battle is. Are they trying to lasso a fish? I’m just the greenhorn here, so I keep my mouth shut and follow suit regardless of how ridiculous their actions are.

Captain Crowbill pulls the line taut. They’ve lassoed it! What?

The goliath fish is wearing now with two lines tugging at it in separate directions and a third restraining its thrashing. They’re making progress, and both me and the captain crank our pulleys as fast as we can to keep up with the momentum of the anglers. The fish continues to fight hard, splashing and rolling until it is slowly raised out of the water.

For the first time, I get a glimpse of what we’re reeling in. It’s no fish. Or at least it doesn’t look like a fish. Not any I’ve ever seen. It’s a third the length of the ship, and it has legs! It has a long snout with massive teeth protruding from it and a long rigid tail with its spine bulging from its back, head to tail. And no scales. Don’t all fish have scales? Tigershit! It’s a river monster! 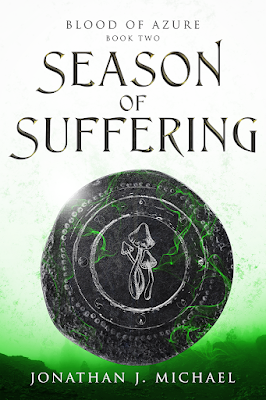 A villain in his own mind, Stone McLarin is labeled the hero for murdering a man.

Not only is Stone weighted down as a hero, but he’s idolized by the dominant religion, and he’s the sole protector of the knowledge of the ages. The pressure of the entire realm is on his shoulders.

Carib Reign, a shapeshifter building an army of immortals, plans to purge the Crimson Capital to find this hidden knowledge. His motive, to give the people of Azure the freedom they deserve.

With many adventures along the way, Stone will lead the charge to defend the Crimson Capital against the Immortal Army. Should he fail, anarchy is inevitable. Death for all Azure, a possibility.

Where there is life, death anticipates. But what if death is abandoned? Life will rebel.

Season of Suffering is part two of the Blood of Azure series—an epic fantasy with both light and dark hearts. You’ll experience many fantasy tropes, clashing swords, unique magic, fantastical beasts, and a wide range of Azure’s scenic terrain.

EXCERPT I: SEASON OF SUFFERING – GOOSE

The foul beast plows through the underbrush, giving none of his obstacles a chance for survival. And I’m in line to be one of them.

Its aroma swoops into my nostrils, and dizziness strikes momentarily. I cannot see straight. I don’t remember the last encounter being this severe. I suppose, like any living thing, we’re not all made alike. And this one reeks.

The Cryptid hardly acknowledges me as I wobble in place. He pushes off me as if I were a tree and he were trying to get some leverage to burst forward. His meaty claw shoves right through me and lashes at my lower shoulder. A loud sound curdles from my throat. It’s an odd feeling these days—to use my vocal cords.

The beast stops in its tracks and turns to face me.

“Friend.” I speak, hoping it understands this language.

Its dark eyes glaring. Its teeth baring. Its smell daunting. It stands rigid and unmoving. An apex predator. A long moment passes as we both maintain eye contact.

“No time. Friend.” It finally replies, then turns to leave.

It looks over its shoulder with a subtle nod. Teeth still baring. Aroma still daunting. But its eyes are sad.

“Run.” It turns and hurdles through the undergrowth in a rush, disappearing behind the wood giants. 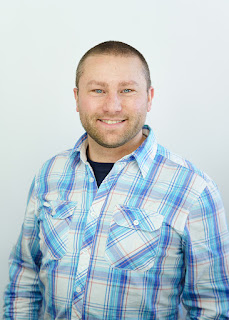 Jonathan J Michael was born and raised in the greater Seattle area in the scenic state of Washington. Jonathan is an advocate of science, nature, and exploration, which has a heavy influence in his debut series, Blood of Azure.

When I drive down the freeway, I often want to veer onto the backroads and head for the mountains. When I'm at an evening gathering, I'm eager to step outside and gaze at the stars. When I'm on a ferry, I'm at the guardrail staring into the depths wondering what kind of leviathans lurk below. I'm an explorer, and since I'm not on the next Crew Dragon headed for the ISS, fantasy novels let me have what I seek. I write to explore a world of wonder.