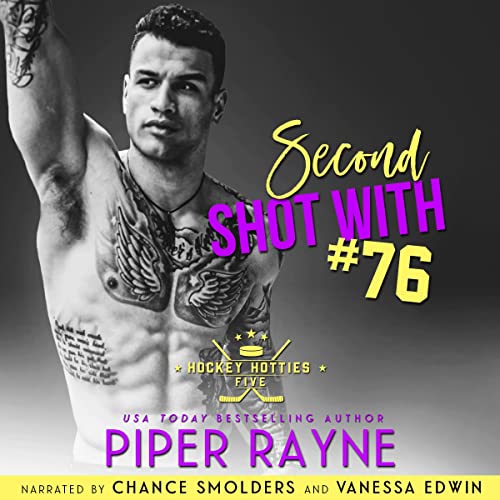 My mom always said you don’t get a second shot at making a first impression. I’ve remembered that my entire career. Especially since I’m one of the few Black men who play professional hockey.

I’m calculated and respectful in the way I speak to my coaches, the owners, and the media. I’ve never taken a risk...until her.

I could blame it on the fact that for once I pushed away the pressure of my career for the ocean waves, the sand, and good times with my new teammates. But those are excuses because the minute I saw her at the airport, something lit up inside me and the best week of my life was spent with her in my bed.

After our week in paradise, we said good-bye, exchanged phone numbers, and both assumed that unless one of us was flying through the other’s city on the opposite side of the country, our vacation fling was over.

Then one night after practice I see her. She’s here. In my city. Telling me she moved here for a job. If that’s not fate, tell me what is.

I’ve never wanted a second shot more than I do this time, but she’s determined to leave what we were on the island we left behind.

Momma Says: 3 stars⭐⭐⭐
Second Shot with #76 is an entertaining second chance romance, maybe a little angstier (umm... more angst? Whichever) than what I've read by Piper Rayne, but there's nothing wrong with a bit of angst. There were a couple of things I wasn't crazy about in this one, particularly the plot twist. I saw it coming, but I don't care to admit that I really hoped to be wrong. It's just a plot device that I'm not fond of. I did like the way the relationship between Cory and Ande progresses from the time they run into each other to the above-mentioned plot twist. It has a slow burn feel to it that works well for these characters, but even with the slow burn, Cory and Ande drove me a little crazy with the things they didn't say, and I really wanted to shake one or both of them several times throughout the book. I also enjoyed the many secondary characters. While I have read Piper Rayne before, this is the first in this series, so these characters were all new to me. I'm sure there are many things I've missed about the various relationships, but enough information is included so that I got the gist of who's with who and the dynamic between the team and the significant others. Speaking of, after some things that happened in this book, I'm looking forward to the next in the series.
Both narrators on this one were new to me, and again, some things worked and some, well, not so much. Vanessa Edwin was a solid choice for Ande, and she brings out the angst and emotion very well. Chance Smolders has a great voice, but his narration fell short for me. It just didn't feel natural, and it was hard to stay immersed in the book during his chapters.
I think it comes down to a mixture of a couple of things that didn't personally work for me. The plot twist coupled with part of the narration kept this one from being quite what I expected from Piper Rayne. It's not bad, by any means. The pacing and writing style are everything they should be, so I will continue to read and listen to this duo's books. All things considered, I'd have to say this one landed right smack in the middle for me.