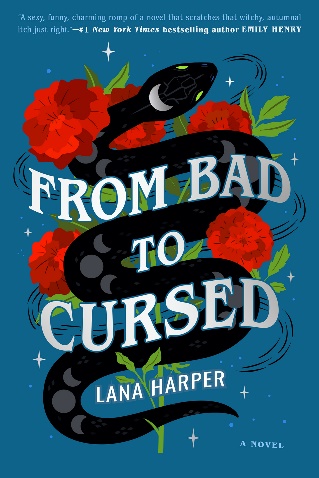 Opposites attract in this wickedly charming rom-com by Lana Harper, New York Times bestselling author of Payback’s a Witch.Wild child Isidora Avramov is a thrill chaser, adept demon summoner, and—despite the whole sexy-evil-sorceress vibe—also a cuddly animal lover. When she’s not designing costumes and new storylines for the Arcane Emporium’s haunted house, Issa's nursing a secret, conflicted dream of ditching her family’s witchy business to become an indie fashion designer in her own right. But when someone starts sabotaging the celebrations leading up to this year’s Beltane festival with dark, dangerous magic, a member of the rival Thorn family gets badly hurt—throwing immediate suspicion on the Avramovs. To clear the Avramov name and step up for her family when they need her the most, Issa agrees to serve as a co-investigator, helping none other than Rowan Thorn get to the bottom of things.Rowan is the very definition of lawful good, so tragically noble and by-the-book he makes Issa’s teeth hurt. In accordance with their families’ complicated history, he and Issa have been archenemies for years and have grown to heartily loathe each other. But as the unlikely duo follow a perplexing trail of clues to a stunning conclusion, Issa and Rowan discover how little they really know each other… and stumble upon a maddening attraction that becomes harder to ignore by the day.

Momma Says: 5 stars⭐⭐⭐⭐⭐
Opposites attract, enemies to lovers, family feuds - they all work well for romance, and they tend to generate some heat of one kind or another. This second visit to Thistle Grove is as much fun as the first, and the writing transported me right back there. World building is a big deal for me, and it can make or break a story. There's certainly nothing broken here. Like the first book, this place and these people feel real. Lana Harper has created an atmosphere that almost convinces me the fantastical things in this book can happen. Add to that a couple with crazy good chemistry whether they want to admit it or not, and a mystery to solve, and this is one hard to put down read. It's fast paced, witty, and loads of fun from the first line to the last. I'll leave details to be discovered and just say this is another must read book in this must read series, and I can't wait to see what's next for Thistle Grove.

The thing no one tells you about summoning demons is, sometimes you have to think outside the box.

I should know; I've been calling them up into my circles since I was a kid. My mother even encouraged it, as a slightly safer alternative to a way riskier burgeoning fascination with elder gods. (PSA, if you don't want your daughter developing an interest in the gnarlier chthonic entities before she can even ride a bike, maybe don't read her Lovecraft at bedtime. Seems obvious enough, right?)

The books go on about how summonings are supposed to be these disciplined, rule-bound affairs-and most of the time, they are, if you know what's good for you. The truth is, if you take sensible precautions, it's not nearly as dangerous as people think. And such a rush, too; the daemonfolk are interesting as the hells, pun intended. Sometimes they're inclined to share juicy secrets or ancient spells, the kind you won't find in even the oldest, dustiest grimoires. Other times they're so gorgeous it breaks your heart, or so horrifying that even a quick glimpse caught before you banish them is enough to leave you panting, heart battering against your ribs, blood boiling through your veins while your whole skin rolls with chills.

Shit, even when you play it safe, there's nothing quite like a demon summoning to make you feel alive.

Of course, there's always the odd time that even a pro like me fucks it up just a wee bit.

As usual, I'd cast my summoning circle in the warrens of the basement beneath The Bitters, in a chilly, cavernous room that had started out as Elena's third wine cellar-because who gets by with just one these days; certainly not my mother-and now doubled as my demonic lair. No windows, musty air that smelled like centuries-old stone and aged bordeaux, witchlight sconces flinging trembling shadows on the walls; the perfect ambiance for such a conjuring. The summoning spell was already whipping through me like a tempest, my protective amulets glowing hot against my chest. Everything felt like it should, all systems go.

But as soon as Malachus began to coalesce, I felt a twinge of wrongness in my gut, an unsettling, instinctive awareness that something was off.

According to my research, Malachus was supposed to manifest as a brawny reptilian dude, macho and mindless to the max. The type of mostly harmless demon whose bark was way worse than his bite. I hadn't summoned in a while, so tonight was meant to be just a practice flex, easing myself back into the swing of things after a little break.

But the silhouette gathering in my circle was unmistakably femme-presenting, on her knees and with her back to me, with the kind of ridiculous waist-to-hip ratio that would've put Cardi B to shame. A swoop of hair, black and glossy as moonlit water, curled around an even darker set of wings folded neatly against her back. I could see the wings' outline fill with a faint scrawl like one of my own sketches, a vague suggestion of feathers, before they sprang into a three-dimensional profusion of lush black down. And the scent that engulfed the cellar wasn't just the usual rank whiff of sulfur and brimstone, but something sweeter, more elegant and piercing. Jasmine, maybe, with a subtle patchouli twist. The kind of compelling perfume that made you want to follow someone around, drooling until they told you what they wore.

When she turned to look over her shoulder at me, with massive eyes the color of molten gold, my mouth went dry as dust. I couldn't be positive, having never seen one before-they weren't exactly a dime a dozen-but for my money, this sure looked like one of the former seraphim.

A fucking fallen angel, landed in my basement.

"Oh, Hecate's chilly tits," I whispered to myself, my heart plummeting even as a rising thrill swelled inside my stomach. "This is so very deeply fucked."

From what I'd read, the fallen were temperamental, ultra-wily, and very powerful-exactly the kind of unpredictable daemonfolk I do not fuck with as a general rule. But here she was anyway, which meant shit was about to get extremely outside the box.

She whipped around to face me in a single blurring motion, still on her knees, dainty little hands folded primly on her lap. Her fingers were tipped with vicious black talons, knuckles dusted with iridescent scales. She cocked her head, examining me with a sly intensity, the tip of a pink forked tongue peeking between her full lips. Then she smiled at me, wide and feral, a flash of onyx teeth capped with fanged canines and incisors.

Let me tell you, there's something viscerally unnerving about black teeth, especially ones as sharp as hers. I had a mounting suspicion that, unlike the real Malachus-wherever in the hells he was-this chick's demonic bite might be a lot worse than her bark.

A bloom of pure dread unfurled inside my chest, shooting down into my fingertips and toes like a falling star. Alas, the thrill-chasing part of my brain that often took the wheel at times like this downright relished it. So this wasn't going to be a lesson-learned type of moment, then, I noted to myself. No big surprise there; I'd never been much good at those.

Lana Harper is the author of four YA novels about modern-day witches and historical murderesses. Born in Serbia, she grew up in Hungary, Romania, and Bulgaria before moving to the US, where she studied psychology and literature at Yale University, law at Boston University, and publishing at Emerson College. She recently moved to Chicago with her family.
at May 19, 2022