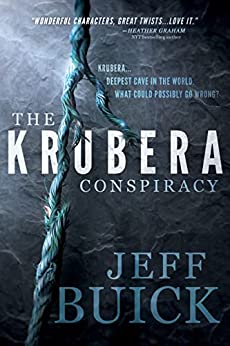 Krubera – deepest cave in the world. What could possibly go wrong?As it turns out, quite a lot.Ross and Damon Fraser are brothers on an elite caving team attempting a new world depth record, but the wheels come off the moment they arrive in the tiny breakaway republic of Abkhazia. Akhar Kutsnia, head of the country’s shadowy intelligence network, throws them in prison and gives them an ultimatum.Damon, a lawyer for the CIA, will remain on the surface to ferret out who is meddling with Abkhazia’s upcoming election, while Ross continues down the cave with the team. If Damon refuses to help, or is unsuccessful, Ross will not make it out of the cave alive.Thrust into Kutsnia’s murky world of covert ops, Damon teams up with Kari Howland, an analyst out of the CIA’s London office. Together, as the election ticks ever closer, they begin to peel back the layers of a deadly conspiracy.

Momma Says: 5 stars⭐⭐⭐⭐⭐
Part action/adventure, part conspiracy thriller, The Krubera Conspiracy is wonderfully plotted and will have your heart racing and your mind working just as hard. This type of thriller is a little bit outside my wheelhouse, but Jeff Buick's writing is not, so I wasn't surprised when his descriptive writing paired with relatable characters drew me in. Don't get me wrong, I am not a CIA lawyer or part of Abkhazia's intelligence network, and I definitely am not a caver. I googled Krubera cave, and that place is terrifying. Anyway, what I'm getting at is that there is pretty much zero chance of me walking in these characters' shoes, but Buick makes them wonderfully human. His good guys are good without being perfect or superhero-like, and his bad guys are bad without being the cliched guy in the black hat twirling his mustache. People are layered, and we see that here.
Damon and Ross are good examples of that. One's a lawyer and the other a brand-new doctor. We find out early that they like adrenaline, hence the caving, and the thought crossed my mind several times that these brothers are getting more than they bargained for on this trip. There's even a bit of a family theme in with all the action and adventure because it doesn't matter that Damon doesn't have the clearance for what he's supposed to do or that Ross has to continue on with the trip like everything's okay. What matters is that both will do whatever it takes to get through this, to get each other through this, because that's what we do for those we love - and that's as close to a spoiler as I'm gonna get.
I mentioned earlier that this book was outside my wheelhouse, but it would've been exactly my husband's kind of read. The story is full of intrigue and action, it's a little political, and it's current. It's reminiscent of the Tom Clancy and WEB Griffin books hubby faithfully read as soon as they released, and in my opinion, it stands toe to toe with any in the genre. The story is exciting and engaging, the pacing keeps the pages turning long past bedtime, and I'd say this is one that would translate well to the big screen. It just goes to show that stepping outside your wheelhouse is a good thing, a very good thing.